More on Dr. Who 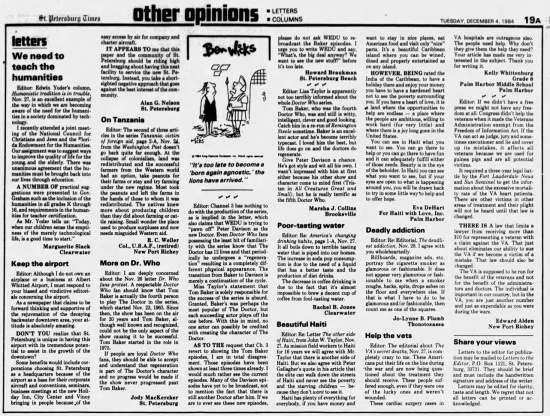 Editor: I am deeply concerned about the Nov. 26 letter Dr. Who fans protest. A respectable Doctor Who fan should know that Tom Baker is actually the fourth person to play The Doctor in the series, which started Nov. 23, 1963. Since then, the show has been on the air for 20 years and Tom Baker, although well known and recognized, could not be the only aspect of the show causing it to be successful. Tom Baker started in the role in 1975.

If people are loyal Doctor Who fans, they should be able to accept and understand that regeneration is part of The Doctor's character and no progress would be made if the show never progressed past Tom Baker.

Editor: Channel 3 has nothing to do with the production of the series, as is implied in the letter, which also claims that WEDU is trying to "pawn off" Peter Davison as the new Doctor. Even Doctor Who fans possessing the least bit of familiarity with the series know that The Doctor has 12 lives and that periodically he undergoes a "regeneration" resulting in a completely different physical appearance. The transition from Baker to Davison is merely a continuation of the cycle.

Miss Taylor's statement that Tom Baker is solely responsible for the success of the series is absurd. Granted, Baker's was perhaps the most popular of The Doctor, but each succeeding actor plays off the one before. With this in mind, no one actor can possibly be credited with creating the character of The Doctor.

AS TO THE request that Ch. 3 revert to showing the Tom Baker episodes, I am in total disagreement. Those episodes have been shown at least three times already. I would much rather see the current episodes. Many of the Davison episodes have yet to be broadcast, not to mention the fact that there is still another Doctor after him. If we are to ever see these new episodes, please do n006Ft ask WEDU to rebroadcast the Baker episodes. I urge you to write WEDU and say, "What's, the big deal anyway? We want to see the new stuff!" before it's too late.

Editor: Lisa Taylor is apparently not too terribly informed about the whole Doctor Who series.

Tom Baker, who was the fourth Doctor Who, was and still is witty, intelligent, clever and good looking. Catch him in a re-run of Remington Steele sometime. Baker is an excellent actor and he's become terribly typecast. I loved him the best, but life does go on and the doctors do regenerate.

Give Peter Davison a chance. He's got style and wit all his own. I wasn't impressed with him at first either because his other show and character come to mind first (Tristan in All Creatures Great and Small), but he is really terrific as the fifth Doctor Who.