Much more than Who 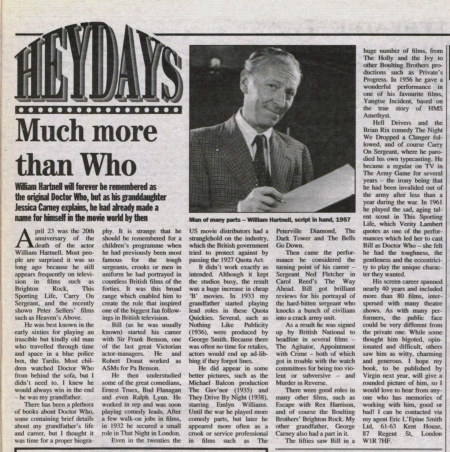 William Hartnell will forever be remembered as the original Doctor Who, but as his granddaughter Jessica Carney explains, he had already made a name for himself in the movie world by then

April 23 was the 20th anniversary of the death of the actor William Hartnell. Most people are surprised it was so long ago because he still appears frequently on television in films such as Brighton Rock, This Sporting Life, Carry On Sergeant, and the recently shown Peter Sellers' films such as Heaven's Above.

He was best known in the early sixties for playing an irascible but kindly old man who travelled through time and space in a blue police box, the Tardis. Most children watched Doctor Who from behind the sofa, but I didn't need to. I knew he would always win in the end - he was my grandfather.

There has been a plethora of books about Doctor Who, some containing brief details about my grandfather's life and career, but I thought it was time for a proper biography. It is strange that he should be remembered for a children's programme when he had previously been most famous for the tough sergeants, crooks or men in uniform he had portrayed in countless British films of the forties. It was this broad range which enabled him to create the role that inspired one of the biggest fan followings in British television.

Bill (as he was usually known) started his career with Sir Frank Benson, one of the last great Victorian actor-managers. He and Robert Donat worked as ASMs for Pa Benson.

He then understudied some of the great comedians, Ernest Truex, Bud Flanagan and even Ralph Lynn. He worked in rep and was soon playing comedy leads. After a few walk-on jobs in films, in 1932 he secured a small role in That Night in London.

Even in the twenties the US movie distributors had a stranglehold on the industry, which the British government tried to protect against by passing the 1927 Quota Act.

It didn't work exactly as intended. Although it kept the studios busy, the result was a huge increase in cheap 'B' movies. In 1933 my grandfather started playing lead roles in these Quota Quickies. Several, such as Nothing Like Publicity (1936), were produced by George Smith. Because there was often no time for retakes, actors would end up ad-libbing if they forgot lines.

He did appear in some better pictures, such as the Michael Balcon production The Guv'nor (1935) and They Drive By Night (1938), starring Emlyn Williams. Until the war he played more comedy parts, but later he appeared more often as a crook or service professional in films such as The Peterville Diamond, The Dark Tower and The Bells Go Down.

Then came the performance he considered the turning point of his career Sergeant Ned Fletcher in Carol Reed's The Way Ahead. Bill got brilliant reviews for his portrayal of the hard-bitten sergeant who knocks a bunch of civilians into a crack army unit.

As a result he was signed up by British National to headline in several films The Agitator, Appointment with Crime - both of which got in trouble with the watch committees for being too violent or subversive - and Murder in Reverse.

There were good roles in many other films, such as Escape with Rex Harrison, and of course the Boulting Brothers' Brighton Rock. My other grandfather, George Carney also had a part in it.

The fifties saw Bill in a huge number of films, from The Holly and the Ivy to other Booking Brothers productions such as Private's Progress. In 1956 he gave a wonderful performance in one of his favourite films, Yangtse Incident, based on the true story of HMS Amethyst.

Hell Drivers and the Brian Rix comedy The Night We Dropped a Clanger followed, and of course Carry On Sergeant, where he parodied his own typecasting. He became a regular on TV in The Army Game for several years - the irony being that he had been invalided out of the army after less than a year during the war. In 1961 he played the sad, aging talent scout in This Sporting Life, which Verity Lambert quotes as one of the performances which led her to cast Bill as Doctor Who - she felt he had the toughness, the gentleness and the eccentricity to play the unique character they wanted.

His screen career spanned nearly 40 years and included more than 80 films, interspersed with many theatre shows. As with many performers, the public face could be very different from the private one. While some thought him bigoted, opinionated and difficult, others saw him as witty, charming and generous. I hope my book, to be published by Virgin next year, will give a rounded picture of him, so I would love to hear from anyone who has memories of working with him, good or bad! I can be contacted via my agent Eric L'Epine Smith Ltd, 61-63 Kent House, 87 Regent St, London W I R 7HF.

Caption: Man of many parts - William Hartnell, script in hand, 1957