My Dad's a Dalek! 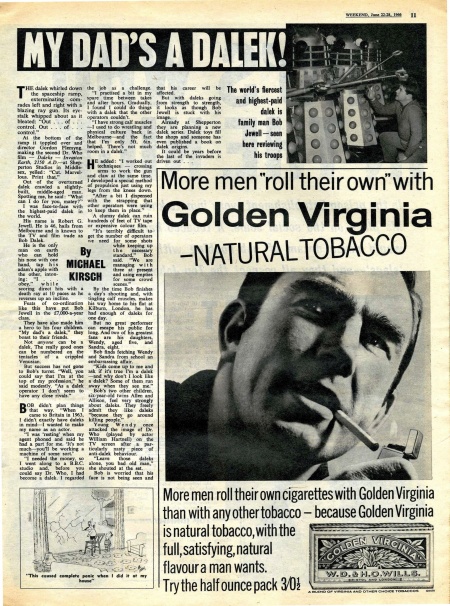 At the bottom of the ramp it toppled over and director Gordon Flemyng, making the second Dr. Who film — Daleks — Invasion Earth, 2150 A.D.—at Shepperton Studios in Middlesex, yelled: "Cut. Marvellous. Print that."

Out of the overturned dalek crawled a slightly-built, middle-aged man. Spotting me, he said: "What can I do for you, matey?"

I was face-to-face with the highest-paid dalek in the world.

His name is Robert G. Jewell. He is 46, hails from Melbourne and is known to the TV and film trade as Bob Dalek.

He is the only man on earth who can hold his nose with one hand, tap his adam's apple with the other, intoning "I ... obey," while scoring direct hits with a death ray at 10 paces as he reverses up an incline.

Feats of co-ordination like this have put Bob Jewell in the £7,000-a-year class.

They have also made him a hero to his four children. "My dad's a dalek," they boast to their friends.

Not anyone can be a dalek. The really good ones can be numbered on the tentacles of a crippled Venusian.

But success has not gone to Bob's turret. "Well, you could say that I'm at the top of my profession," he said modestly. "As a dalek operator I don't seem to have any close rivals."

BOB didn't plan things that way. "When I came to Britain in 1963, I didn't exactly have daleks in mind—I wanted to make my name as an actor.

"I was 'resting' when my agent phoned and said he had a part for me. 'It's not much—you'll be working a machine of some sort.'

"I needed the money, so I went along to a B.B.C. studio and, before you could say Dr. Who, I had become a dalek. I regarded the job as a challenge.

"I practised a bit in my spare time between takes and after hours. Gradually, I found I could do things with a dalek that the other operators couldn't.

"I have strong calf muscles —I used to do wrestling and physical culture back in Melbourne—and the fact that I'm only 5ft. 6in. helped. There's not much room in a dalek."

HE added : "I worked out techniques — crossing arms to work the gun and claw at the same time. I developed a special method of propulsion just using my legs from the knees down.

"After a bit I dispensed with the strapping that other operators were using to keep them in place."

A clumsy dalek can ruin hundreds of feet of TV tape or expensive colour film.

"It's terribly difficult to get the number of operators we need for some shots while keeping up the necessary standard," Bob said. "We are managing with three at present and using empties for some crowd scenes."

By the time Bob finishes a day's shooting and, with tingling calf muscles, makes his way home to his flat at Kilburn, London, he has had enough of daleks for one day.

But no great performer can escape his public for long. And two of his greatest fans are his daughters, Wendy, aged five, and Sandra, eight.

"Kids come up to me and ask if it's true I'm a dalek —and why don't I look like a dalek? Some of them run away when they see me."

Bob's two other children, six-year-old twins Allen and Allison, feel very strongly about daleks. They freely admit they like daleks "because they go around killing people."

Young Wendy once attacked the image of Dr. Who (played by actor William Hartnell) on the TV screen after a particularly nasty piece of anti-dalek behaviour.

"Leave those daleks alone, you bad old man," she shouted at the set.

Bob is worried that his face is not being seen and that his career will be affected.

But with daleks going from strength to strength, it looks as though Bob Jewell is stuck with his image.

Already at Shepperton they are planning a new dalek series. Dalek toys fill the shops and someone has even published a book on dalek origins.

It could be years before the last of the invaders is driven out ...