My primeval monsters even turn up their snouts at the Daleks 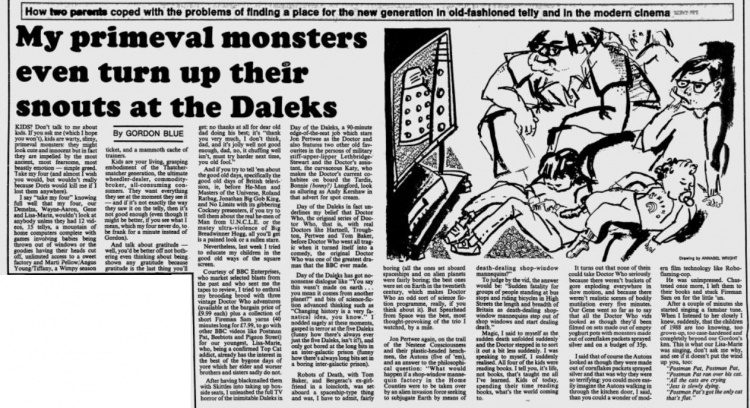 KIDS? Don't talk to me about kids. If yes ask me (which I hope you won't), kids are warty, slimy, primeval monsters: they might look cute and innocent but in fact they are impelled by the most ancient, most fearsome, most beastly emotion —- simple greed. Take my four (and almost I wish you would, but wouldn't really because Doris would kill me if I lost them anywhere).

I say "take my four" knowing full well that my four, our Demelza, Wayne-Aaron, Gene and Lisa-Marie, wouldn't look at anybody unless they bad 12 videos, 15 tellys, a mountain of home computers complete with games involving babies being thrown out of windows or the goodies having their heads cut oft, unlimited access to a sweet factory and Marti Pellow/Angus Young/Tiffany, a Wimpy season ticket, and a mammoth cache of trainers.

Kids are your living, grasping embodiment of the Thatcher-snatcher generation, the ultimate wheedler-dealer, commodity-broker, all-consuming consumers. They want everything they see at the moment they see it — and if it's not exactly the way they saw it on the telly, then it's not good enough (even though it might be better, if you see what I mean, which my four never do, to be frank for a minute instead of Gordon).

And talk about gratitude —well, you'd be better off not bothering even thinking about being shown any gratitude because gratitude is the last thing you'll get: no thanks at all for dear old dad doing his best; it's "thank you very much, I don't think, dad, and it's jolly well not good enough, dad, no, it chuffing well isn't, must try harder next time, you old fool"

And if you try to tell 'em about the good old days, specifically the good old days of British television, ie, before He-Men and Masters of the Universe, Roland Ratbag, Jonathan Big Gob King, and No Limits with its gibbering Cockney presenters, if you try to tell them about the real he-men of Man from U.N.C.L.E. or the matey ultra-violence of Big Breadwinner Hogg, all you'll get is a pained look or a sullen stare.

Nevertheless, last week I tried to educate my children in the good old ways of the square screen.

Courtesy of BBC Enterprises, who market selected blasts from the past and who sent me the tapes to renew, I tried to enthral my brooding brood with three vintage Doctor Who adventures (available at the bargain price of £9.99 each) plus a collection of short Fireman Sam yarns (40 minutes long for £7.99. to go with other BBC videos like Postman Pat, Beebtots and Pigeon Street) for our youngest. Lisa-Marie, who, being a confirmed Top Cat addict, already has the interest in the best of the bygone days of yore which her elder and worser brothers and sisters sadly do not

After having blackmailed them with Skittles into taking up box-side seats, I unleashed the full TV horror of the inimitable Daleks in Day of the Daleks, a 90-minute edge-of-the-seat job which stars Jeri Pertwee as the Doctor and also features two other old favourites in the persons of military stiff-upper-lipper Lethbridge-Stewart and the Doctor's assistant, the curvaceous Katy, who makes the Doctor's current co-habitee on board the Tardis, Bonnie (bonny?) Langford. look as alluring as Andy Kershaw in that advert for spot cream.

Day of the Daleks has got nonsense dialogue like "You say this wasn't made on earth ... you mean it comes from another planet?" and bits of science-fiction advanced thinking such as "Changing history is a very fanatical idea, you know." I nodded sagely at these moments, gasped in tenor at the five Daleks (funny how there's always ever just the five Daleks, isn't it?), and only got bored at the long bits in an inter-galactic prison (funny how there's always long bits set in a boring inter-galactic prison).

Robots of Death, with Tom Baker, and Bergerac's ex-girlfriend in a loincloth, was set aboard a spaceship-type thing and was, I have to admit, fairly boring (all the ones set aboard spaceships and on alien planets were fairly boring; the best ones were set on Earth in the twentieth century, which makes Doctor Who an odd sort of science fiction programme, really, if you think about it). But Spearhead from Space was the best, most thought-provoking of the trio I watched, by a mile.

Jon Pertwee again, on the trail of the Nestene Consciousness and their plastic-headed henchmen, the Autons (five of 'em), and an answer to the philosophical question: "What would happen if a shop-window mannequin factory in the Home Counties were to be taken over by an alien invasion force seeking to subjugate Earth by means of death-dealing shop-window mannequins?"

To judge by the vid, the answer would be: "Sudden fatality for groups of people standing at bus stops and riding bicycles in High Streets the length and breadth of Britain as death-dealing shop-window mannequins step out of shop windows and start dealing death."

Magic, I said to myself as the sudden death unfolded suddenly and the Doctor stepped in to sort it out a bit less suddenly. I was speaking to myself, I suddenly realised. All four of the kids were reading books. I tell you, it's life, not books, that's taught me all I've learned. Kids of today, spending their time reading books, what's the world coming to.

It turns out that none of them could take Doctor Who seriously because there weren't buckets of gore exploding everywhere in slow motion, and because there weren't realistic scenes of bodily mutilation every five minutes. Our Gene went so far as to say that all the Doctor Who yids looked as though they'd been filmed on sets made out of empty yoghurt pots with monsters made out of cornflakes packets sprayed silver and on a budget of 35p.

I said that of course the Au tons looked as though they were made out of cornflakes packets sprayed silver and that was why they were so terrifying: you could more easily the Autons walking in through the kitchen door. I said, than you could a wonder of modern film technology like Robo-flaming-cop.

He was unimpressed. Chastened once more, I left them to their books and stuck Fireman Sam on for the little 'um.

After a couple of minutes, he started singing a familiar tune. When I listened to her closely I knew, suddenly, that the children of 1988 are too knowing, too grown-up, too case-hardened and completely beyond out Gordon's ken. This is what our Lisa-Marie was singing, don't ask me why, and see if it doesn't put the wind up you, too:

"Postman Pat, Postman Pat. Postman Pat ran over his cat. All the cars are crying. Jess if slowly dying. Postman Pat's got the only cat that's flat."