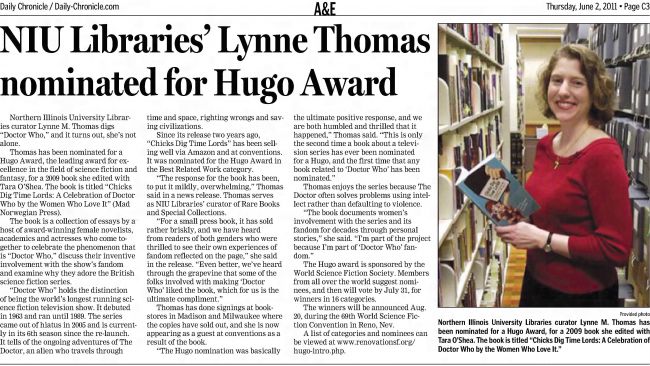 Thomas has been nominated for a Hugo Award, the leading award for excellence in the field of science fiction and fantasy, for a 2009 book she edited with Tara O'Shea. The book is titled "Chicks Dig Time Lords: A Celebration of Doctor Who by the Women Who Love It" (Mad Norwegian Press).

The book is a collection of essays by a host of award-winning female novelists, academics and actresses who come together to celebrate the phenomenon that is "Doctor Who," discuss their inventive involvement with the show's fandom and examine why they adore the British science fiction series.

"Doctor Who" holds the distinction of being the world's longest running science fiction television show. It debuted in 1963 and ran until 1989. The series came out of hiatus in 2005 and is currently in its 6th season since the re-launch. It tells of the ongoing adventures of The Doctor, an alien who travels through time and space, righting wrongs and saving civilizations.

Since its release two years ago, "Chicks Dig Time Lords" has been selling well via Amazon and at conventions. It was nominated for the Hugo Award in the Best Related Work category.

"The response for the book has been, to put it mildly, overwhelming," Thomas said in a news release. Thomas serves as NIU Libraries' curator of Rare Books and Special Collections.

"For a small press book, it has sold rather briskly, and we have heard from readers of both genders who were thrilled to see their own experiences of fandom reflected on the page," she said in the release. "Even better, we've heard through the grapevine that some of the folks involved with making 'Doctor Who' liked the book, which for us is the ultimate compliment."

Thomas has done signings at bookstores in Madison and Milwaukee where the copies have sold out, and she is now appearing as a guest at conventions as a result of the book.

"The Hugo nomination was basically the ultimate positive response, and we are both humbled and thrilled that it happened," Thomas said. "This is only the second time a book about a television series has ever been nominated for a Hugo, and the first time that any book related to 'Doctor Who' has been nominated."

Thomas enjoys the series because The Doctor often solves problems using intellect rather than defaulting to violence.

"The book documents women's involvement with the series and its fandom for decades through personal stories," she said. "I'm part of the project because I'm part of 'Doctor Who' fandom."

The Hugo award is sponsored by the World Science Fiction Society. Members from all over the world suggest nominees, and then will vote by July 31, for winners in 16 categories.

The winners will be announced Aug. 20, during the 69th World Science Fiction Convention in Reno, Nev.

A list of categories and nominees can be viewed at www.renovationsf.org/hugo-intro.php.