Never Mind the Tea How Much Is the Pop 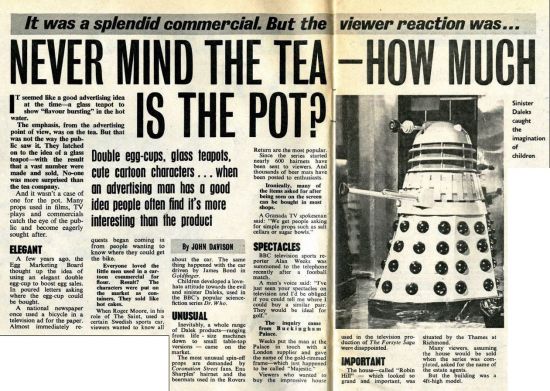 It was a splendid commercial, But the viewer reaction was...

IT seemed like a good advertising idea at the time—a glass teapot to show "flavour bursting" in the hot water.

The emphasis, from the advertising point of view, was on the tea. But that was not the way the public saw it. They latched on to the idea of a glass teapot—with the result that a vast number were made and sold. No-one was more surprised than the tea company.

And it wasn't a case of one for the pot. Many props used in films. TV plays and commercials catch the eye of the public and become eagerly sought after.

A few years ago, the Egg Marketing Board thought up the idea of using an elegant double egg-cup to boost egg sales. In poured letters asking where the egg-cup could be bought.

A national newspaper once used a bicycle in a television ad for the paper. Almost immediately requests began coming in from people wanting to know where they could get the bike.

Everyone loved the little men used in a cartoon commercial for flour. Result? The characters were put on the market as containers. They sold like hot cakes.

When Roger Moore. in his role of The Saint, used a certain Swedish sports car. viewers wanted to know all about the car. The same thing happened with the car driven by James Bond in Gold finger.

Children developed a love-hate attitude towards the evil and sinister Daleks, used in the BBC's popular science-fiction series Dr. Who.

Inevitably, a whole range of Dalek products—ranging from life - size machines down to small table-top versions — came on the market.

The most unusual spin-off props are demanded by Coronation Street fans. Ena Sharpies' hairnet and the beermats used in the Rovers Return are the most popular.

Since the series started nearly 600 hairnets have been sent to viewers. And thousands of beer mats have been posted to enthusiasts.

Ironically, many of the items asked for after being seen on the screen can he bought in most shops.

A Granada TV spokesman said: "We get people asking for simple props such as salt cellars or sugar bowls."

BBC television sports reporter Alan Weeks was summoned to the telephone recently after a football, match.

A man's voice said: "I've just seen your spectacles on television and I'd be oblig if you could tell me where I could buy a similar pair. They would be ideal for golf."

The inquiry came from Buckingham Palace.

Weeks put the man at the Palace in touch with a London supplier and gave the name of the gold-rimmed frame—which just happened to be called "Majestic?

Viewers who wanted to buy the impressive house used in the television production of The Forsyte Saga were disappointed.

The house—called "Robin Hill" — which looked so grand and important, was situated by the Thames at Richmond.

Many viewers, assuming the house would be sold when the series was completed. asked for the name of the estate agents.

But the building was a 4ft-high model.