New 'Who' to begin in June 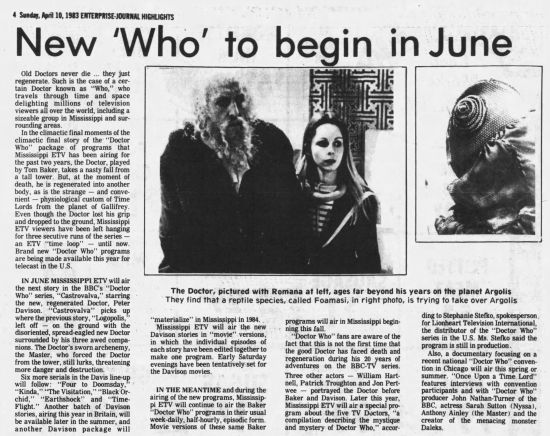 Old Doctors never die ... they just regenerate. Such is the case of a certain Doctor known as "Who," who travels through time and space delighting millions of television viewers all over the world, including a sizeable group in Mississippi and surrounding areas.

In the climactic final moments of the climactic final story of the "Doctor Who" package of programs that Mississippi ETV has been airing for the past two years, the Doctor, played by Tom Baker, takes a nasty fall from a tall tower. But, at the moment of death, he is regenerated into another body, as is the strange — and convenient — physiological custom of Time Lords from the planet of Gallifrey. Even though the Doctor lost his grip and dropped to the ground, Mississippi ETV viewers have been left hanging for three consecutive runs of the series — an ETV "time loop" — until now. Brand new "Doctor Who" programs are being made available this year for telecast in the U.S.

IN JUNE MISSISSIPPI ETV will air the next story in the BBC's "Doctor Who" series, "Castrovalva," starring the new, regenerated Doctor, Peter Davison. "Castrovalva" picks up where the previous story, "Logopolis," left off — on the ground with the disoriented, spread-eagled new Doctor surrounded by his three awed companions. The Doctor's sworn archenemy, the Master, who forced the Doctor from the tower, still lurks, threatening more danger and destruction.

Six more serials in the Davis line-up will follow: "Four to Doomsday," "Kinda," "The Visitation," "Black Orchid," "Earthshock" and "Time-Flight." Another batch of Davison stories, airing this year in Britain, will be available later in the summer, and another Davison package will "materialize" in Mississippi in 1984.

Mississippi ETV will air the new Davison stories in "movie" versions, in which the individual episodes of each story have been edited together to make one program. Early Saturday evenings have been tentatively set for the Davison movies.

IN THE MEANTIME and during the airing of the new programs, Mississippi ETV will continue to air the Baker "Doctor Who" programs in their usual week-daily, half-hourly, episodic form. Movie versions of these same Baker programs will air in Mississippi beginning this fall.

"Doctor Who" fans are aware of the fact that this is not the first time that the good Doctor has faced death and regeneration during his 20 years of adventures on the BBC-TV series.

Three other actors — William Hartnell, Patrick Troughton and Jon Pertwee — portrayed the Doctor before Baker and Davison. Later this year, Mississippi ETV will air a special program about the five TV Doctors, "a compilation describing the mystique and mystery of Doctor Who," according to Stephanie Stefko, spokesperson for Lionheart Television International, the distributor of the "Doctor Who" series in the U.S. Ms. Stefko said the program is still in production.

Also, a documentary focusing on a recent national "Doctor Who" convention in Chicago will air this spring or summer. "Once Upon a Time Lord" features interviews with convention participants and with "Doctor Who" producer John Nathan-Turner of the BBC, actress Sarah Sutton (Nyssa), Anthony Ainley (the Master) and the creator of the menacing monster Daleks.

Caption: The Doctor, pictured with Romana at left, ages far beyond his years on the planet Argolis. They find that a reptile species, called Foamasi, in right photo, is trying to take over Argolis