New Adventures in Space and time 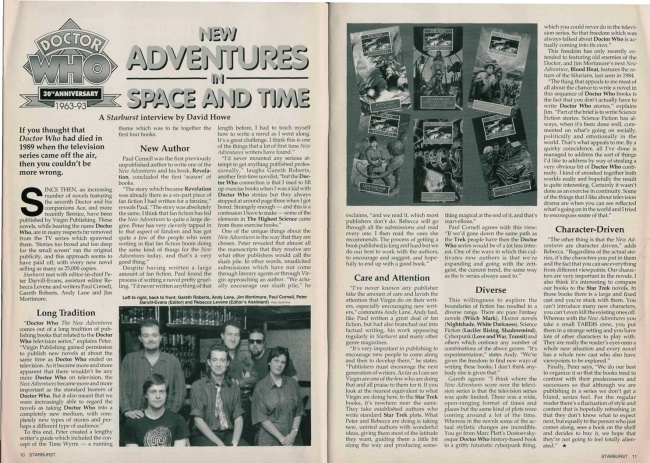 If you thought that Doctor Who had died in 1989 when the television series came off the air, then you couldn't be more wrong.

SINCE THEN, an increasing number of novels featuring the seventh Doctor and his companions Ace, and more recently Bernice, have been published by Virgin Publishing. These novels, while bearing the name Doctor Who, are in many respects far removed from the TV series which spawned them. 'Stories too broad and too deep for the small screen' ran the original publicity, and this approach seems to have paid off, with every new novel selling as many as 25,000 copies.

"Doctor Who The New Adventures comes out of a long tradition of publishing books that related to the Doctor Who television series," explains Peter. "Virgin Publishing gained permission to publish new novels at about the same time as Doctor Who ended on television. As it became more and more apparent that there wouldn't be any more Doctor Who on television, the New Adventures became more and more important as the standard bearers of Doctor Who. But it also meant that we were increasingly able to regard the novels as taking Doctor Who into a completely new medium, with completely new types of stories and perhaps a different type of audience."

To this end, Peter created a lengthy writer's guide which included the concept of the Time Wyrm — a running theme which was to tie together the first four books.

Paul Cornell was the first previously unpublished author to write one of the New Adventures and his book, Revelation, concluded the first 'season' of books.

"The story which became Revelation was already there as a six-part piece of fan fiction I had written for a fanzine," reveals Paid. "The story was absolutely the same. I think that fan fiction has fed the New Adventures to quite a large degree. Peter has very cleverly tapped in to that aspect of fandom and has got quite a few of the people who were writing in that fan fiction boom doing the same kind of things for the New Adventures today, and that's a very good thing."

Despite having written a large amount of fan fiction, Paul found the process of writing a novel pretty gruelling. "I'd never written anything of that length before, I had to teach myself how to write a novel as I went along. It's a great challenge. I think this is one of the things that a lot of first time New Adventures writers have found."

"I'd never mounted any serious attempt to get anything published professionally," laughs Gareth Roberts, another first-time novelist, but the Doctor Who connection is that I used to fill up exercise books when I was a kid with Doctor Who stories but they always stopped at around page three when I got bored. Strangely enough — and this is a confession I have to make — some of the elements in The Highest Science came from those exercise books."

One of the unique things about the New Adventures is the way that they are chosen. Peter revealed that almost all the manuscripts that they receive are what other publishers would call the slush pile. In other words, unsolicited submissions which have not come through literary agents or through Virgin approaching an author. "We actually encourage our slush pile," he exclaims, "and we read it, which most publishers don't do. Rebecca will go through all the submissions and read every one. I then read the ones she recommends. The process of getting a book published is long and hard but we do our best to work with the authors, to encourage and suggest, and hopefully to end up with a good book."

"I've never known any publisher take the amount of care and lavish the attention that Virgin do on their writers, especially encouraging new writers," comments Andy Lane. Andy had, like Paul written a great deal of fan fiction, but had also branched out into factual writing, his work appearing regularly in Starburst and many other genre magazines.

"It's very important in publishing to encourage new people to come along and then to develop them," he states. "Publishers must encourage the next generation of writers. As far as I can see Virgin are one of the few who are doing that and all praise to them for it. If you look at the nearest equivalent to what Virgin are doing here, to the Star Trek books, it's nowhere near the same. They take established authors who write standard Star Trek plots. What Peter and Rebecca are doing is taking new, untried authors with wonderful ideas, giving them most of the latitude they want, guiding them a little bit along the way and producing some thing magical at the end of it, and that's marvellous."

Paul Cornell agrees with this view: "If we'd gone down the same path as the Trek people have then the Doctor Who series would be of a lot less interest. One of the ways in which this cultivates new authors is that we're expanding and going with the zeitgeist, the current trend, the same way as the tv series always used to."

This willingness to explore the boundaries of fiction has resulted in a diverse range. There are pure Fantasy novels (Witch Mark), Horror novels (Nightshade, White Darkness), Science Fiction (Lucifer Rising, Shadowmind), Cyberpunk (Love and War, Transit) and others which embrace any number of combinations of the above genres. "it's experimentation," states Andy. "We're given the freedom to find new ways of writing these books; I don't think anybody else is given that."

Gareth agrees: "I think where the New Adventures score over the television series is that the television series was quite limited. There was a wide, open-ranging format of times and places but the same kind of plots were coming around a lot of the time. Whereas in the novels some of the actual stylistic changes are incredible. You go from Marc Platt's Dostoevsky-esque Doctor Who history-based book to a gritty futuristic cyberpunk thing, which you could never do in the television series. So that freedom which was always talked about Doctor Who is actually coming into its own."

This freedom has only recently extended to featuring old enemies of the Doctor, and Jim Morllmore's next New Adventure, Blood Heat, features the return of the Silurians, last seen in 1984.

"The thing that appeals to me most of all about the chance to write a novel in this sequence of Doctor Who books is the fact that you don't actually have to write Doctor Who stories," explains Jim. "Part of the brief is to write Science Fiction stories. Science Fiction has always, when it's been done well, commented on what's going on socially, politically and emotionally in the world. That's what appeals to me. By a quirky coincidence, all I've done is managed to address the sort of things I'd like to address by way of stealing a very obvious bit of Doctor Who continuity. I kind of smashed together both worlds really and hopefully the result is quite interesting. Certainly it wasn't done as an exercise in continuity. Some of the things that I like about television drama are when you can see reflected what's going on in the world and I tried to encompass some of that."

"The other thing is that the New Adventures are character driven," adds Rebecca. "Regardless of the actual stories, it's the characters you put in them and the fact that you can see everything from different viewpoints. Our characters are very important in the novels. I also think it's interesting to compare our books to the Star Trek novels. In those books there is a large and fixed cast and you're stuck with them. You can't introduce many new characters, you can't even kill the existing ones off. Whereas with the New Adventures you take a small TARDIS crew, you put them in a strange setting and you have lots of other characters to play with. They are really the reader's eyes onto a whole new situation and every novel has a whole new cast who also have viewpoints to be explored."

Finally, Peter says, "We do our best to organize it so that the books tend to contrast with their predecessors and successors so that although we are publishing in a series we don't get a bland, series feel. For the regular reader there's a fluctuation of style and content that is hopefully refreshing in that they don't know what to expect next, but equally to the person who just comes along, sees a book on the shelf and decides to buy it, we hope that they're not going to feel totally alienated."