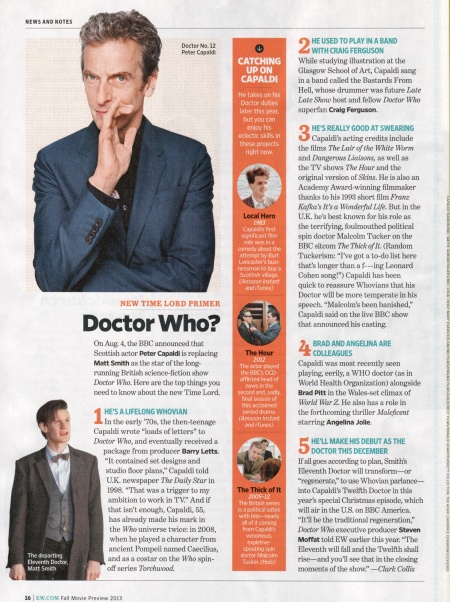 On Aug. 4, the BBC announced that Scottish actor Peter Capaldi is replacing Matt Smith as the star of the long-running British science-fiction show Doctor Who. Here are the top things you need to know about the new Time Lord.

In the early '70s, the then-teenage Capaldi wrote "loads of letters" to Doctor Who, and eventually received a package from producer Barry Letts. "It contained set designs and studio floor plans," Capaldi told U.K. newspaper The Daily Star in 1998. "That was a trigger to my ambition to work in TV." And if that isn't enough, Capaldi, 55, has already made his mark in the Who universe twice: in 2008, when he played a character from ancient Pompeii named Caecilius, and as a costar on the Who spinoff series Torchwood.

2 HE USED TO PLAY IN A BAND WITH CRAIG FERGUSON

While studying illustration at the Glasgow School of Art, Capaldi sang in a band called the Bastards From Hell, whose drummer was future Late Late Show host and fellow Doctor Who superfan Craig Ferguson.

Capaldi's acting credits include the films The Lair of the White Worm and Dangerous Liaisons, as well as the TV shows The Hour and the original version of Skins. He is also an Academy Award-winning filmmaker thanks to his 1993 short film Franz Kafka's It's a Wonderful Life. But in the U.K. he's best known for his role as the terrifying, foulmouthed political spin doctor Malcolm Tucker on the BBC sitcom The Thick of It. (Random Tuckerism: "I've got a to-do list here that's longer than a f---ing Leonard Cohen song!") Capaldi has been quick to reassure Whovians that his Doctor will be more temperate in his speech. "Malcolm's been banished," Capaldi said on the live BBC show that announced his casting.

4 BRAD AND ANGELINA ARE COLLEAGUES

Capaldi was most recently seen playing, eerily, a WHO doctor (as in World Health Organization) alongside Brad Pitt in the Wales-set climax of World War Z. He also has a role in the forthcoming thriller Maleficent starring Angelina Jolie.

5 HE'LL MAKE HIS DEBUT AS THE DOCTOR THIS DECEMBER

If all goes according to plan, Smith's Eleventh Doctor will transform—or "regenerate," to use Whovian parlance—into Capaldi's Twelfth Doctor in this year's special Christmas episode, which will air in the U.S. on BBC America. "It'll be the traditional regeneration," Doctor Who executive producer Steven Moffat told EW earlier this year. "The Eleventh will fall and the Twelfth shall rise—and you'll see that in the closing moments of the show" —Clark Collis

CATCHING UP ON CAPALDI

He takes on his Doctor duties later this year, but you can enjoy his eclectic skills in these projects

The Hour 2012 The actor played the BBC's OCD-afflicted head of news in the second and, sadly, final season of this acclaimed period drama. (Amazon Instant and iTunes)

2005-12 The British series is a political satire with bite—nearly all of it coming from Capaldi's venomous, expletive-spouting spin doctor Malcolm Tucker. (Hulu)