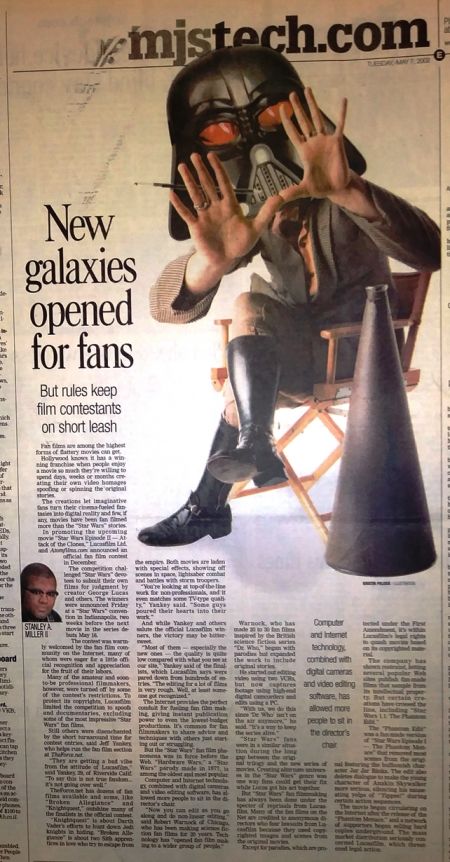 Fan films are among the highest forms of flattery movies can get.

Hollywood knows it has a winning franchise when people enjoy a movie so much they're willing to spend days. weeks or months creating their own video homages spoofing or spinning the original stories.

The creations let imaginative fans turn their cinema-fueled fantasies into digital reality and few. if any. movies have been fan filmed more than the "Star Wars" stories.

The competition challenged "Star Wars" devotees to submit their own films for judgment by creator George Lucas and others. The winners were announced Friday at a "Star Wars" convention in Indianapolis, two weeks before the next movie in the series debuts May 16.

The contest was warmly welcomed by the fan film community on the Internet. many of whom were eager for a little official recognition and appreciation for the fruit of their labors.

Many of the amateur and soon-to-be professional filmmakers, however were turned off by some of the contest's restrictions. To protect its copyrights, Lucasfilm limited the competition to spoofs and documentaries, excluding some of the most impressive "Star Wars" fan films.

Still others were disenchanted by the short turnaround time for contest entries, said Jeff Yankey, who helps run the fan film section at TheForce.net.

"They are getting a bad vibe from the attitude of Lucasfilm," said Yankey, 29, of Riverside Calif. "To say this is not true fandom ... it's not going over well."

TheForce.net has dozens of fan films available and some, like "Broken Allegiance" and "Knightquest," outshine many of the finalists in the official contest.

"Knightquest" is about Darth Wader's efforts to hunt down Jedi knights in hiding. "Broken Allegiance" is about two Sith apprentices in love who try to escape from the empire. Both movies are laden with special effects. showing off scenes in space, lightsaber combat and battles with storm troopers.

"You're looking at top-of-the-line work for non-professionals, and it even matches same TV-type quality," Yankey said. "Some guys poured their hearts into their work"

And while Yankey and others salute the official Linn winners, the victory may be bittersweet.

"Most of them — especially the new ones — the quality is quite low compared with what you see at our site," Yankey said of the finalists, which Lucasfilm says were pared down from hundreds of entries. The editing for a lot of films is very rough Well, at least some got recognized."

The Internet provides the perfect conduit for fuelling fan film making, giving instant publication power to even the lowest-budget productions. It's common for fan filmmakers to share advice and techniques with others starting out or struggling.

But the 'Star Wars' fan film phenomena was in force before the Web. "Hardware Wars," a "Star Wars" parody made in 1977, is among the oldest and most popular.

Computer and Internet technology combined with digital cameras and video editing software. has allowed more people to sit in the director's chair.

"Now you can edit as you go along and do non-linear editing," said Robert Warnock of Chicago, who has been making science fiction fan films for 20 years. Technology has "opened fan film making to a wider grasp of people."

Warnock, who has made 20 to 30 flan films inspired by the British science fiction series "Dr Who," began with parodies but expanded the work to include original stories.

"Star Wars fans were in a similar situation during the long gap between the original trilogy and the new series of movies. Creating alternate universes in the 'Star Wars' genre was one way fans could get their fix while Lucas got his act together.

But "Star Wars" fan filmmaking has always been done under the specter of reprisals from Lucasfilm. Many of the fan films om the Net are credited to anonymous directors who fear lawsuits from Lucasfilm because they used copyrighted images and scenes from the original movies.

Except for parodies, which are protected under the First Amendment, it's within Lucasfilm's legal rights to quash movies based on its copyrighted material.

The company has shown restraint, letting several popular Web sites publish fan-made films that sample from its intellectual property. But certain creations have crossed the line, including "Star Wars 1.1, The Phantom Edit."

The "Phantom Edit" was a fan-made version of "star Wars Episode I - The Phantom Menace" that removed most scenes from the original featuring the buffoonish character Jar Jar Binks. The edit also deletes dialogue to make the character of Anakin Skywalker more serious, silencing his nauseating yelps of "Yipee!" during certain action sequences.

The movie began circulating on the Internet after release of the "Phantom Menace," and a network of supporters began selling hard copies underground. The mass market distribution seriously concerned Lucasfilm, which threatened legal action.