Not of this planet 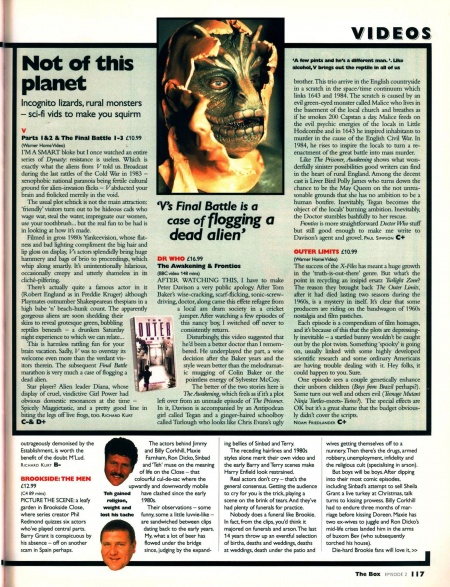 AFTER WATCHING THIS, I have to make Peter Davison a very public apology. After Tom Baker's wise-cracking, scarf-flicking, sonic-screw-driving, doctor, along came this effete refugee from a local am dram society in a cricket jumper. After watching a few episodes of this nancy boy, I switched off never to consistently return.

Disturbingly, this video suggested that he'd been a better doctor than I remembered. He underplayed the part, a wise decision after the Baker years and the style wears better than the melodramatic mugging of Colin Baker or the pointless energy of Sylvester McCoy.

The better of the two stories here is The Awakening, which feels as if it's a plot left over from an unmade episode of The Prisoner. In it, Davison is accompanied by an Antipodean girl called Tegan and a ginger-haired schoolboy called Turlough who looks like Chris Evans's ugly brother. This trio arrive in the English countryside in a scratch in the space/time continuum which links 1643 and 1984. The scratch is caused by an evil green-eyed monster called Malice who lives in the basement of the local church and breathes as if he smokes 200 Capstan a day. Malice feeds on the evil psychic energies of the locals in Little Hodcombe and in 1643 he inspired inhabitants to murder in the cause of the English Civil War. In 1984, he rises to inspire the locals to turn a reenactment of the great battle into mass murder.

Like The Prisoner, Awakening shows what wonderfully sinister possibilities good writers can find in the heart of rural England. Among the decent cast is Liver Bird Polly James who turns down the chance to be the May Queen on the not unreasonable grounds that she has no ambition to be a human bonfire. Inevitably, Tegan becomes the object of the locals' burning ambition. Inevitably, the Doctor stumbles bashfully to her rescue.

Frontios is more straightforward Doctor Who stuff but still good enough to make me write to Davison's agent and grovel.