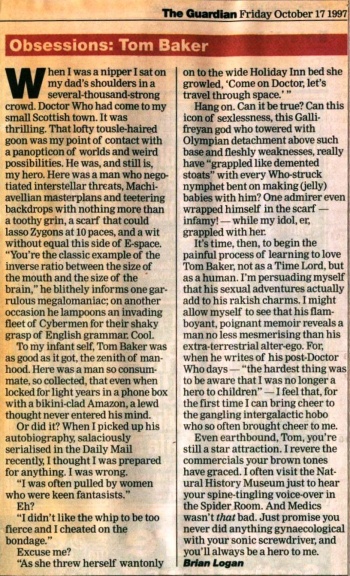 When I was a nipper I sat on my dad's shoulders in a several-thousand-strong crowd. Doctor Who had come to my small Scottish town. It was thrilling. That lofty tousle-haired goon was my point of contact with a panopticon of worlds and weird possibilities. He was, and still is, my hero. Here was a man who negotiated interstellar threats, Machiavellian masterplans and teetering backdrops with nothing more than a toothy grin, a scarf that could lasso Zygons at 10 paces, and a wit without equal this side of E-space. "You're the classic example of the inverse ratio between the size of the mouth and the size of the brain," he blithely informs one garrulous megalomaniac; on another occasion he lampoons an invading fleet of Cybermen for their shaky grasp of English grammar. Cool.

To my infant self, Tom Baker was as good as it got, the zenith of manhood. Here was a man so consummate, so collected, that even when locked for light years in a phone box with a bikini-clad Amazon, a lewd thought never entered his mind.

Or did it? When I picked up his autobiography, salaciously serialised in the Daily Mail recently, I thought I was prepared for anything. I was wrong.

"I was often pulled by women who were keen fantasists."

"I didn't like the whip to be too fierce and I cheated on the bondage."

"As she threw herself wantonly on to the wide Holiday Inn bed she growled, 'Come on Doctor, let's travel through space.' "

Hang on. Can it be true? Can this icon of sexlessness, this Galli-freyan god who towered with Olympian detachment above such base and fleshly weaknesses, really have "grappled like demented stoats" with every Who-struck nymphet bent on making (jelly) babies with him? One admirer even wrapped himself in the scarf —infamy! — while my idol, er, grappled with her.

It's time, then, to begin the painful process of learning to love Tom Baker, not as a Time Lord, but as a human. I'm persuading myself that his sexual adventures actually add to his rakish charms. I might allow myself to see that his flamboyant, poignant memoir reveals a man no less mesmerising than his extra-terrestrial alter-ego. For, when he writes of his post-Doctor Who days — "the hardest thing was to be aware that I was no longer a hero to children" — I feel that, for the first time I can bring cheer to the gangling intergalactic hobo who so often brought cheer to me.

Even earthbound, Tom, you're still a star attraction. I revere the commercials your brown tones have graced. I often visit the Natural History Museum just to hear your spine-tingling voice-over in the Spider Room. And Medics wasn't that bad. Just promise you never did anything gynaecological with your sonic screwdriver, and you'll always be a hero to me.