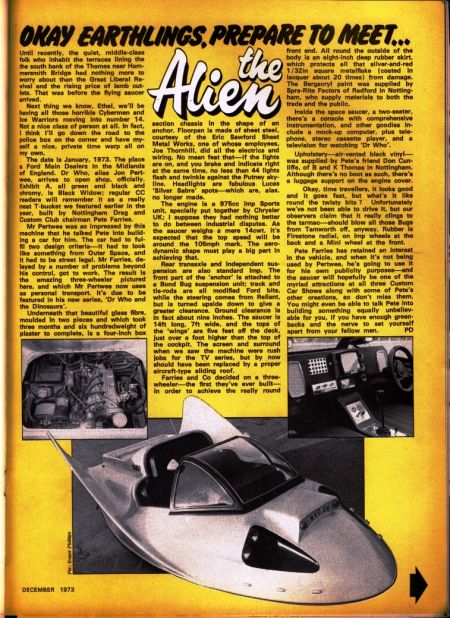 Until recently, the quiet, middle-class folk who inhabit the terraces lining the the south bank of the Thames near Hammersmith Bridge had nothing more to worry about than the Great Liberal Revival and the rising price of lamb cutlets. That was before the flying saucer arrived.

Next thing we know, Ethel, we'll be having all those horrible Cybermen and Ice Warriors moving into number 14. Not a nice class of person at all. In fact, I think I'll go down the road to the police box on the corner and have myself a nice, private time warp all on my own.

The date is January, 1973. The place a Ford Main Dealers in the Midlands of England. Dr Who, alias Jon Pert-wee, arrives to open shop, officially. Exhibit A, all green and black and chromy, is Black Widow; regular CC readers will remember it as a really neat T-bucket we featured earlier in the year, built by Nottingham Drag and Custom Club chairman Pete Farries.

Mr Pertwee was so impressed by this machine that he talked Pete into building a car for him. The car had to fulfil two design criteria—it had to look like something from Outer Space, and it had to be street legal. Mr Farries, delayed by a number of problems beyond his control, got to work. The result is the amazing three-wheeler pictured here, and which Mr Pertwee now uses as personal transport. It's due to be featured in his new series, 'Dr Who and the Dinosaurs'.

Underneath that beautiful glass fibre, moulded in two pieces and which took three months and six hundredweight of plaster to complete, is a four-inch box section chassis in the shape of an anchor. Floorpan is made of sheet steel, courtesy of the Eric Sawford Sheet Metal Works, one of whose employees, Joe Thornhill, did all the electrics and wiring. No mean feat that—if the lights are on, and you brake and indicate right at the same time, no less than 44 lights flash and twinkle against the Putney skyline. Headlights are fabulous Lucas 'Silver Sabre' spots—which are, alas, no longer made.

The engine is a 975cc Imp Sports unit, specially put together by Chrysler UK; I suppose they had nothing better to do between industrial disputes. As the saucer weighs a mere 14cwt, it's expected that the top speed will be around the 105mph mark. The aerodynamic shape must play a big part in achieving that.

Rear transaxle and independent suspension are also standard Imp. The front part of the 'anchor' is attached to a Bond Bug suspension unit; track and tie-rods are all modified Ford bits, while the steering comes from Reliant, but is turned upside down to give a greater clearance. Ground clearance is in fact about nine inches. The saucer is 14ft long, 7ft wide, and the tops of the 'wings' are five feet off the deck, just over a foot higher than the top of the cockpit. The screen and surround when we saw the machine were rush jobs for the TV series, but by now should have been replaced by a proper aircraft-type sliding roof.

Farries and Co decided on a three-wheeler—the first they've ever built—in order to achieve the really round front end. All round the outside of the body is an eight-inch deep rubber skirt, which protects all that silver-and-red 1 /32in square metalflake (coated in lacquer about 20 times) from damage. The Bergacryl paint was supplied by Spra-Rite Factors of Radford in Nottingham, who supply materials to both the trade and the public.

Inside the space saucer, a two-seater, there's a console with comprehensive instrumentation, and other goodies include a mock-up computer, plus telephone, stereo cassette player, and a television for watching 'Dr Who'.

Upholstery—air-vented black vinyl—was supplied by Pete's friend Don Cunliffe, of B and K Thomas in Nottingham. Although there's no boot as such, there's a luggage support on the engine cover.

Okay, time travellers, it looks good and it goes fast, but what's it like round the twisty bits ? Unfortunately we've not been able to drive it, but our observers claim that it really clings to the tarmac—should blow all those Bugs from Tamworth off, anyway. Rubber is Firestone radial, on Imp wheels at the back and a Mini wheel at the front.

Pete Farries has retained an interest in the vehicle, and when it's not being used by Pertwee, he's going to use it for his own publicity purposes—and the saucer will hopefully be one of the myriad attractions at all three Custom Car Shows along with some of Pete's other creations, so don't miss them. You might even be able to talk Pete into building something equally unbelievable for you, if you have enough greenbacks and the nerve to set yourself apart from your fellow men.