Old as the hills ... fresh as paint 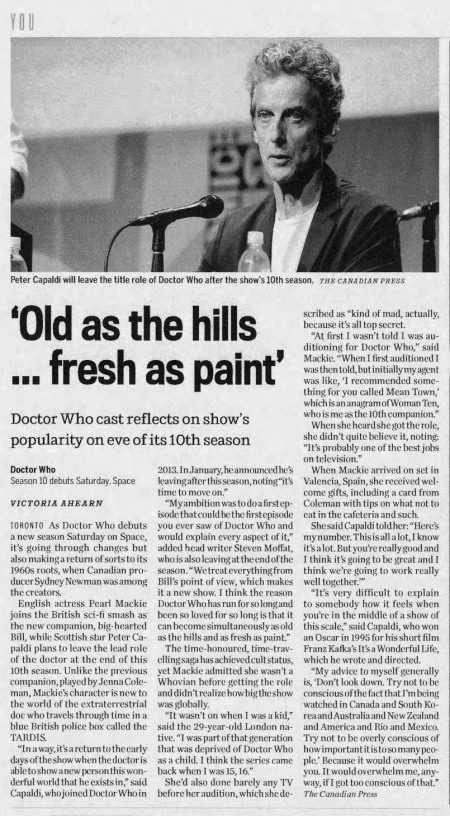 TORONTO As Doctor Who debuts a new season Saturday on Space, its going through changes but also making a return of sorts to its 1960s roots, when Canadian producer Sydney Newman was among the creators.

English actress Pearl Mackie joins the British sci-fi smash as the new companion, big-hearted Bill, while Scottish star Peter Capaldi plans to leave the lead role of the doctor at the end of this 10th season. Unlike the previous companion, played by Jenna Coleman, Mackie's character is new to the world of the extraterrestrial doe who travels through time in a blue British police box called the TARDIS.

"In a way, it's a return to the early days of the show when the doctor is able to show anew person this wonderful world that he exists in," said Capaldi, who joined Doctor Who in 2013. In January, he announced he's leaving after this season, noting "it's time to move on."

"My ambition was to do a first episode that could be the first episode you ever saw of Doctor Who and would explain every aspect of it: added head writer Steven Moffat, who is also leaving at the end of the season. "We treat everything from Bill's point of view, which makes it a new show. I think the reason Doctor Who has run for so long and been so loved for so long is that it can become simultaneously as old as the hills and as fresh as paint."

The time-honoured, time-travelling saga has achieved cult status, yet Mackie admitted she wasn't a Whovian before getting the role and didn't realize how big the show was globally.

It wasn't on when I was a kid," said the 29-year-old London native. "I was part of that generation that was deprived of Doctor Who as a child. I think the series came back when I was 15, 16."

She'd also done barely any TV before her audition, which she described as "kind of mad, actually, because it's all top secret.

"At first I wasn't told I was auditioning for Doctor Who: said Mackie. "When I first auditioned I was then told, but initially my agent was like, recommended something for you called Mean Town,' which is an anagram of Woman Ten, who is me as the 10th companion:

When she heard she got the role, she didn't quite believe it, noting: "It's probably one of the best jobs on television."

When Mackie arrived on set in Valencia, Spain, she received welcome gifts, including a card from Coleman with tips on what not to eat in the cafeteria and such.

She said Capaldi told her: "Here's my number. This is all a lot, I know it's a lot. But you're really good and I think it's going to be great and I think we're going to work really well together:"

"Ifs very difficult to explain to somebody how it feels when you're in the middle of a show of this scale: said Capaldi, who won an Oscar in 1995 for his short film Franz Kafka's It's a Wonderful Life, which he wrote and directed.

Caption: Peter Capaldi will leave the title role of Doctor Who after the show's 10th season.