On Sci Fi, the Doctor is in again 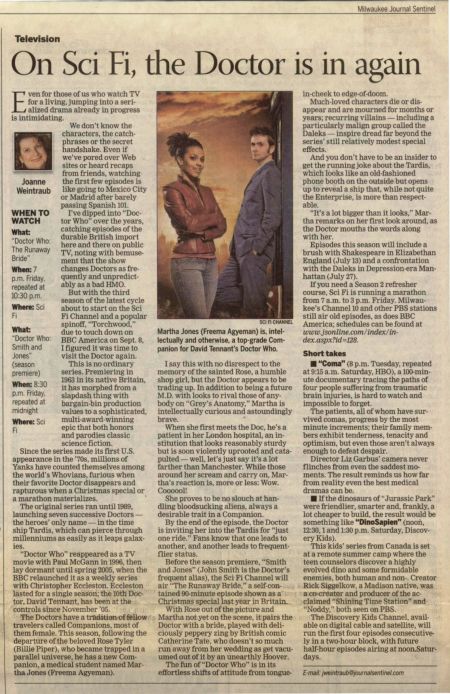 Even for those of us who watch TV for a living, jumping into a serialized drama already in progress is intimidating.

We don't know the characters, the catch-phrases or the secret handshake. Even if we've pored over Web sites or heard recaps from friends, watching the first few episodes is like going to Mexico City or Madrid after barely passing Spanish 101.

I've dipped into "Doctor Who" over the years, catching episodes of the durable British import here and there on public TV, noting with bemusement that the show changes Doctors as frequently and unpredictably as a bad HMO.

But with the third season of the latest cycle about to start on the Sci Fi Channel and a popular spinoff, "Torchwood," due to touch down on BBC America on Sept. 8, I figured it was time to visit the Doctor again.

This is no ordinary series. Premiering in 1963 in its native Britain, it has morphed from a slapdash thing with bargain-bin production values to a sophisticated, multi-award-winning epic that both honors and parodies classic science fiction.

Since the series made its first U.S. appearance in the '70s, millions of Yanks have counted themselves among the world's Whovians, furious when their favorite Doctor disappears and rapturous when a Christmas special or a marathon materializes.

The original series ran until 1989, launching seven successive Doctors — the heroes' only name — in the time ship Tardis, which can pierce through millenniums as easily as it leaps galaxies.

"Doctor Who" reappeared as a TV movie with Paul McGann in 1996, then lay dormant until spring 2005, when the BBC relaunched it as a weekly series with Christopher Eccleston. Eccleston lasted for a single season; the 10th Doctor, David Tennant, has been at the controls since November '05.

The Doctors have a tradition of fellow travelers called Companions, most of them female. This season, following the departure of the beloved Rose Tyler (Billie Piper), who became trapped in a parallel universe, he has a new Companion, a medical student named Martha Jones (Freema Agyeman).

I say this with no disrespect to the memory of the sainted Rose, a humble shop girl, but the Doctor appears to be trading up. In addition to being a future M.D. with looks to rival those of anybody on "Grey's Anatomy," Martha is intellectually curious and astoundingly brave.

When she first meets the Doc, he's a patient in her London hospital, an institution that looks reasonably sturdy but is soon violently uprooted and catapulted — well, let's just say it's a lot farther than Manchester. While those around her scream and carry on, Martha's reaction is, more or less: Wow. COOOOL!

She proves to be no slouch at handling bloodsucking aliens, always a desirable trait in a Companion.

By the end of the episode, the Doctor is inviting her into the Tardis for "just one ride." Fans know that one leads to another, and another leads to frequent-flier status.

Before the season premiere, "Smith and Jones" (John Smith is the Doctor's frequent alias), the Sci Fi Channel will air "The Runaway Bride," a self-contained 90-minute episode shown as a Christmas special last year in Britain.

With Rose out of the picture and Martha not yet on the scene, it pairs the Doctor with a bride, played with deliciously peppery zing by British comic Catherine Tate, who doesn't so much run away from her wedding as get vacuumed out of it by an unearthly Hoover.

The fun of "Doctor Who" is in its effortless shifts of attitude from tongue-in-cheek to edge-of-doom.

Much-loved characters die or disappear and are mourned for months or years; recurring villains — including a particularly malign group called the Daleks — inspire dread far beyond the series' still relatively modest special effects.

And you don't have to be an insider to get the running joke about the Tardis, which looks like an old-fashioned phone booth on the outside but opens up to reveal a ship that, while not quite the Enterprise, is more than respectable.

"It's a lot bigger than it looks," Martha remarks on her first look around, as the Doctor mouths the words along with her.

Episodes this season will include a brush with Shakespeare in Elizabethan England (July 13) and a confrontation with the Daleks in Depression-era Manhattan (July 27).

If you need a Season 2 refresher course, Sci Fi is running a marathon from 7 a.m. to 3 p.m. Friday. Milwaukee's Channel 10 and other PBS stations still air old episodes, as does BBC America; schedules can be found at wwwjsonline.com/intlex/in-dex.aspx?id-128.

What "Doctor Who: The Runaway Bride"

What "Doctor Who: Smith and Jones" (season premiere)