On the record ... with Lynne Thomas 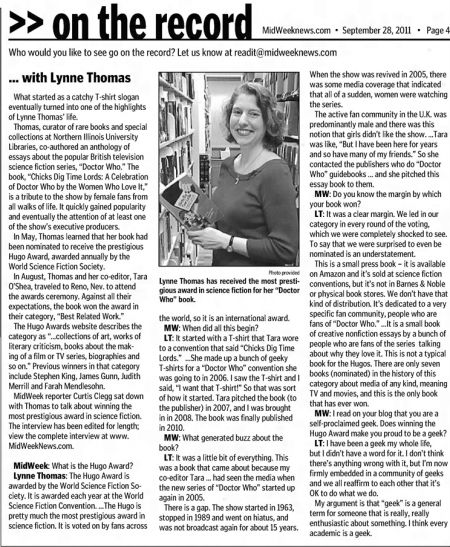 What started as a catchy T-shirt slogan eventually turned into one of the highlights of Lynne Thomas' life.

Thomas, curator of rare books and special collections at Northern Illinois University Libraries, co-authored an anthology of essays about the popular British television science fiction series, "Doctor Who." The book, "Chicks Dig Time Lords: A Celebration of Doctor Who by the Women Who Love It," is a tribute to the show by female fans from all walks of life. It quickly gained popularity and eventually the attention of at least one of the show's executive producers.

In May, Thomas learned that her book had been nominated to receive the prestigious Hugo Award, awarded annually by the World Science Fiction Society.

In August, Thomas and her co-editor, Tara O'Shea, traveled to Reno, Nev. to attend the awards ceremony. Against all their expectations, the book won the award in their category, "Best Related Work."

The Hugo Awards website describes the category as "...collections of art, works of literary criticism, books about the making of a film or TV series, biographies and so on." Previous winners in that category include Stephen King, James Gunn, Judith Merrill and Farah Mendlesohn.

MidWeek reporter Curtis Clegg sat down with Thomas to talk about winning the most prestigious award in science fiction. The interview has been edited for length; view the complete interview at www.MidWeekNews.com.

MidWeek: What is the Hugo Award?

LT: It started with a T-shirt that Tara wore to a convention that said "Chicks Dig Time Lords." ...She made up a bunch of geeky T-shirts for a "Doctor Who" convention she was going to in 2006. I saw the T-shirt and I said, "I want that T-shirt!" So that was sort of how it started. Tara pitched the book (to the publisher) in 2007, and I was brought in in 2008. The book was finally published in 2010.

MW: What generated buzz about the book?

LT: It was a little bit of everything. This was a book that came about because my co-editor Tara ... had seen the media when the new series of "Doctor Who" started up again in 2005.

There is a gap. The show started in 1963, stopped in 1989 and went on hiatus, and was not broadcast again for about 15 years. When the show was revived in 2005, there was some media coverage that indicated that all of a sudden, women were watching the series.

The active fan community in the U.K. was predominantly male and there was this notion that girls didn't like the show....Tara was like, "But I have been here for years and so have many of my friends." So she contacted the publishers who do "Doctor Who" guidebooks ... and she pitched this essay book to them.

MW: Do you know the margin by which your book won?

LT: It was a clear margin. We led in our category in every round of the voting, which we were completely shocked to see. To say that we were surprised to even be nominated is an understatement.

This is a small press book - it is available on Amazon and it's sold at science fiction conventions, but it's not in Barnes & Noble or physical book stores. We don't have that kind of distribution. It's dedicated to a very specific fan community, people who are fans of "Doctor Who." ...It is a small book of creative nonfiction essays by a bunch of people who are fans of the series talking about why they love it. This is not a typical book for the Hugos. There are only seven books (nominated) in the history of this category about media of any kind, meaning TV and movies, and this is the only book that has ever won.

MW: I read on your blog that you are a self-proclaimed geek. Does winning the Hugo Award make you proud to be a geek?

LT: I have been a geek my whole life, but I didn't have a word for it. I don't think there's anything wrong with it, but I'm now firmly embedded in a community of geeks and we all reaffirm to each other that it's OK to do what we do.

My argument is that "geek" is a general term for someone that is really, really enthusiastic about something. I think every academic is a geek.

Caption: Lynne Thomas has received the most prestigious award in science fiction for her "Doctor Who" book.