Parents under attack from the Daleks' pester power 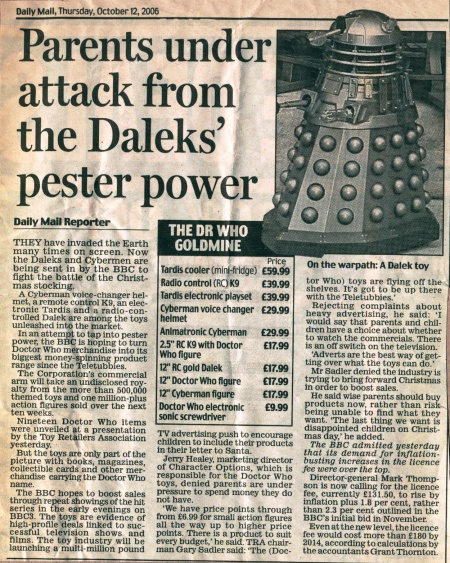 THEY have invaded the Earth many times on screen. Now the Daleks and Cybermen are being sent in by the BBC to fight the battle of the Christmas stocking.

A Cyberman voice-changer helmet, a remote control K9, an electronic Tardis and a radio-controlled Dalek are among the toys unleashed into the market.

In an attempt to tap into pester power, the BBC is hoping to turn Doctor Who merchandise into its biggest money-spinning product range since the Teletubbies.

The Corporation's commercial arm will take an undisclosed royalty from the more than 500,000 themed toys and one million-plus action figures sold over the next ten weeks.

Nineteen Doctor Who items were unveiled at a presentation by the Toy Retailers Association yesterday.

But the toys are only part of the picture with books, magazines, collectible cards and other merchandise carrying the Doctor Who name.

The BBC hopes to boost sales through repeat showings of the hit series in the early evenings on BBC3. The toys are evidence of high-profile deals linked to successful television shows and films. The toy industry will be launching a multi-million pound TV advertising push to encourage children to include their products in their letter to Santa.

Jerry Healey, marketing director of Character Options, which is responsible for the Doctor Who toys, denied parents are under pressure to spend money they do not have.

'We have price points through from £6.99 for small action figures all the way up to higher price points. There is a product to suit every budget,' he said. TRA chairman Gary Sadler said: 'The (Doctor Who) toys are flying off the shelves. It's got to be up there with the Teletubbies.'

Rejecting complaints about heavy advertising, he said: 'I would say that parents and children have a choice about whether to watch the commercials. There is an off switch on the television.

'Adverts are the best way of getting over what the toys can do.'

Mr Sadler denied the industry is trying to bring forward Christmas in order to boost sales.

He said wise parents should buy products now, rather than risk being unable to find what they want. 'The last thing we want is disappointed children on Christmas day,' he added.

The BBC admitted yesterday that its demand for inflation-busting increases in the licence fee were over the top.

Director-general Mark Thompson is now calling for the licence fee, currently £131.50, to rise by inflation plus 1.8 per cent, rather than 2.3 per cent outlined in the BBC's initial bid in November.

Even at the new level, the licence fee would cost more than £180 by 2014, according to calculations by the accountants Grant Thornton.

Caption: On the warpath: A Dalek toy