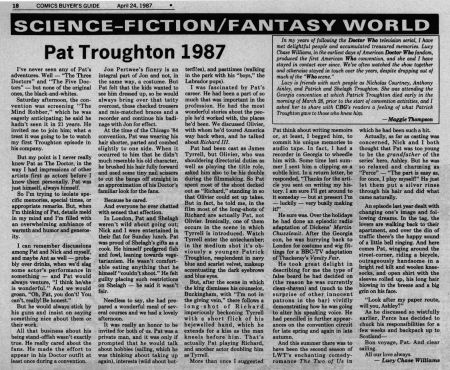 In my years of following the Doctor Who television serial, I have met delightful people and accumulated treasured memories. Lucy Chase Williams, in the earliest days of American Doctor Who fandom, produced the first American Who convention, and she and I have stayed in contact ever since. We've often watched the show together and otherwise stayed in touch over the years, despite dropping out of much of the "Who scene."

Lucy is friends with such people as Nicholas Courtney, Anthony Ainley, and Patrick and Shelagh Troughton. She was attending the Georgia convention at which Patrick Troughton died early in the morning of March 28, prior to the start of convention activities, and I asked her to share with CBG's readers a feeling of what Patrick Troughton gave to those who knew him.

I've never seen any of Pat's adventures. Well — "The Three Doctors" and "The Five Doctors" — but none of the original ones, the black-and-whites.

Saturday afternoon, the convention was screening "The Mind Robber," which he was eagerly anticipating; he said he hadn't seen it in 21 years. He invited me to join him; what a treat it was going to be to watch my first Troughton episode in his company.

But my point is I never really knew Pat as The Doctor, in the way I had impressions of other artists first as actors before I knew them personally. Pat was just himself, always himself.

So I'm trying to isolate specific memories, special times, or appropriate remarks. But, when I'm thinking of Pat, details meld in my mind and I'm filled with an overwhelming ambiance of warmth and humor and generosity.

I can remember discussions among Pat and Nick and myself, and maybe Ant as well — probably over drinks, when we'd slag some actor's performance in something — and Pat would always venture, "I think he/she is wonderful." And we would groan, "Oh, Pat, you don't! You can't, really! Be honest."

But he would always stick by his guns and insist on saying something nice about them or their work.

All that business about his being stand-offish wasn't exactly true. He really cared about the fans. He made the effort to appear in his Doctor outfit at least once during a convention.

Jon Pertwee's finery is an integral part of Jon and not, in the same way, a costume. But Pat felt that the kids wanted to see him dressed up, so he would always bring over that tatty overcoat, those checked trousers and mis-matched braces and a recorder and continue his badinage with Jon for effect.

At the time of the Chicago '84 convention, Pat was wearing his hair shorter, parted and combed slightly to one side. When it occurred to him that he didn't much resemble his old character, he brushed his hair fully forward and used some tiny nail scissors to cut the bangs off straight in an approximation of his Doctor's familiar look for the fans.

And everyone he ever chatted with sensed that affection.

In London, Pat and Shelagh weren't wild about going out; Nick and I were entertained in their flat for Sunday lunch. Pat was proud of Shelagh's gifts as a cook. He himself preferred fish and fowl, leaning towards vegetarianism. He wasn't comfortable eating anything that he himself "couldn't shoot." He felt guilty placing such restrictions on Shelagh — he said it wasn't fair.

Needless to say, she had prepared a wonderful meal of several courses and we had a lovely afternoon.

It was really an honor to be invited for both of us. Pat was a private man, and it was only if prompted that he would talk about hobbies (sailing, which he was thinking about taking up again), interests (wild about butterflies), and pasttimes (walking in the park with his "boys," the Labrador pups).

I was fascinated by Pat's career. He had been a part of so much that was important in the profession. He had the most wonderful stories about the people he'd worked with, the places he'd been. We discussed Olivier, with whom he'd toured America way back when, and he talked about Richard III.

Pat had been cast as James Tyrrell, but Olivier, who was shouldering directorial duties as well as playing the title role, asked him also to be his double during the filmmaking. So Pat spent most of the shoot decked out as "Richard," standing in so that Olivier could set up takes. But in fact, he told me, in the film most of the long-shots of Richard are actually Pat, not Olivier. Ironically, one of them occurs in the scene in which Tyrrell is introduced. Watch Tyrrell enter the antechamber; in the medium shot it's obviously a younger Patrick Troughton, resplendent in navy blue and scarlet velvet, makeup accentuating the dark eyebrows and blue eyes.

But, after the scene in which the king dismisses his counselor, Buckingham, with "I'm not in the giving vein," there follows a long-shot of Richard imperiously beckoning Tyrrell with a short flick of his bejewelled hand, which he extends for a kiss as the man kneels before him. That's actually Pat playing Richard, and another actor doubling him as Tyrrell.

More than once I suggested Pat think about writing memoirs or, at least, I begged him, to commit his unique memories to audio tape. In fact, I had a recorder in Georgia to wheedle him with. Some time last summer I sent him a clipping as a subtle hint. In a return letter, he responded, "Thanks for the article you sent on writing my history. I am sure I'll get around to it someday — but at present I'm — luckily — very busily making it!"

He sure was. Over the holidays he had done an episodic radio adaptation of Dickens' Martin Chuzzlewit. After the Georgia con, he was hurrying back to London for costume and wig fittings for a BBC-TV adaptation of Thackeray's Vanity Fair.

He took great delight in describing for me the type of false beard he had decided on (the reason he was currently clean-shaven) and (much to the surprise of other innocent patrons in the bar) vividly demonstrating how he was going to alter his speaking voice. He had pencilled in further appearances on the convention circuit for late spring and again in late autumn.

And this summer there was to have been the second season of LWT's enchanting comedy-romance The Two of Us in which he had been such a hit.

Actually, as far as casting was concerned, Nick and I both thought that Pat was too young to be the grandfather of the series' hero, Ashley. But he was so relaxed and charming as "Perce" — "The part is easy as, for once, I play myself!" He just let them put a silver rinse through his hair and did what came naturally.

An episode last year dealt with changing one's image and following dreams. In the tag, the lovers are walking back to their apartment, and over the din of traffic there's the happy sound of a little bell ringing. And here comes Pat, winging around the street-corner, riding a bicycle, outrageously handsome in a bright red kilt and woolen knee-socks, and open shirt with the sleeves rolled up, his long hair blowing in the breeze and a big grin on his face.

"Look after my paper route, will you, Ashley?"

As he discussed so wistfully earlier, Perce has decided to chuck his responsibilities for a few weeks and backpack up to Scotland—

All our love always.