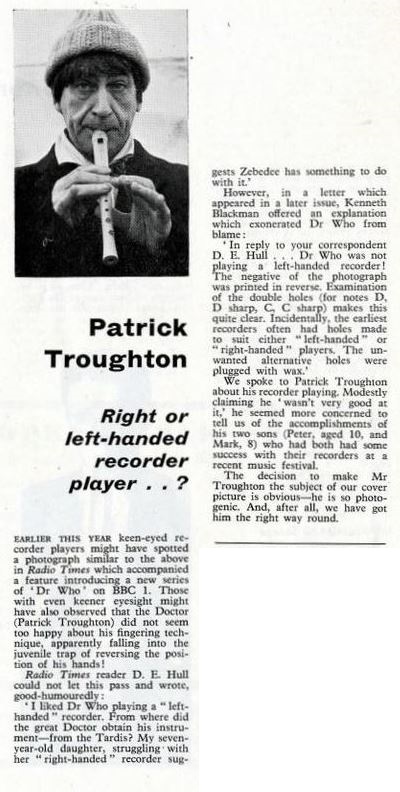 I liked Dr Who playing a "left-handed" recorder. From where did the great Doctor obtain his instrument—from the Tardis? My seven-year-old daughter, struggling' with her "right-handed" recorder suggests Zebedee has something to do with it.'

However, in a letter which appeared in a later issue, Kenneth Blackman offered an explanation which exonerated Dr Who from blame:

'In reply to your correspondent D. E. Hull ... Dr Who was not playing a left-handed recorder! the negative of the photograph was printed in reverse. Examination of the double holes (for notes D, D sharp, C, C sharp) makes this quite clear. Incidentally, the earliest recorders often had holes made to suit either "left-handed" or "right-handed" players. The unwanted alternative holes were plugged with wax.'

We spoke to Patrick Troughton about his recorder playing. Modestly claiming he 'wasn't very good at it,' he seemed more concerned to tell us of the accomplishments of his two sons (Peter, aged 10, and Mark, 8) who had both had some success with their recorder, at a recent music festival.

The decision to make Mr Troughton the subject of our cover picture is obvious—he is so photogenic. And, after all, we have got him the right way round.