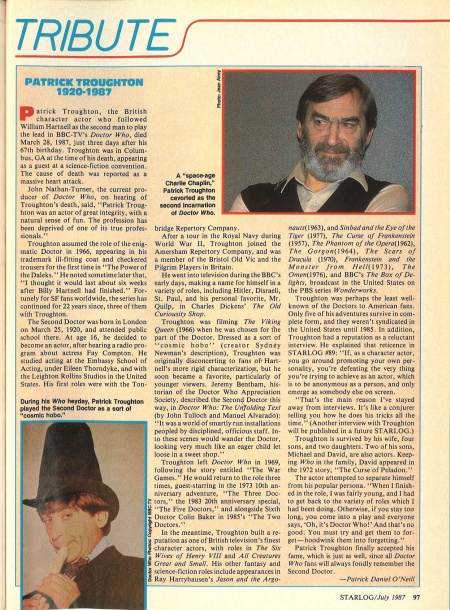 Patrick Troughton, the British character actor who followed William Hartnell as the second man to play the lead in BBC-TV's Doctor Who, died March 28, 1987, just three days after his 67th birthday. Troughton was in Columbus, GA at the time of his death, appearing as a guest at a science-fiction convention. The cause of death was reported as a massive heart attack.

John Nathan-Turner, the current producer of Doctor Who, on hearing of Troughton's death; said, "Patrick Troughton was an actor of great integrity, with a natural sense of fun. The profession has been deprived of one of its true professionals."

Troughton assumed the role of the enigmatic Doctor in 1966, appearing in his trademark ill-fitting coat and checkered trousers for the first time in "The Power of the Daleks." He noted sometime later that, "I thought it would last about six weeks after Billy Hartnell had finished." Fortunely for SF fans worldwide, the series has continued for 22 years since, three of them with Troughton.

The Second Doctor was born in London on March 25, 1920, and attended public school there. At age 16, he decided to become an actor, after hearing a radio program about actress Fay Compton. He studied acting at the Embassy School of Acting, under Eileen Thorndyke, and with the Leighton Rollins Studios in the United States. His first roles were with the Tonbridge Repertory Company.

After a tour in the Royal Navy during World War II, Troughton joined the Amersham Repertory Company, and was a member of the Bristol Old Vic and the Pilgrim Players in Britain.

He went into television during the BBC's early days, making a name for himself in a variety of roles, including Hitler, Disraeli, St. Paul, and his personal favorite, Mr. Quilp, in Charles Dickens' The Old Curiousity Shop.

Troughton was filming The Viking Queen (1966) when he was chosen for the part of the Doctor. Dressed as a sort of "cosmic hobo" (creator Sydney Newman's description), Troughton was originally disconcerting to fans of, Hartnell's more rigid characterization, but he soon became a favorite, particularly of younger viewers. Jeremy Bentham, historian of the Doctor Who Appreciation Society, described the Second Doctor this way, in Doctor Who: The Unfolding Text (by John Tulloch and Manuel Alvarado): "It was a world of smartly run installations peopled by disciplined, officious staff. Into these scenes would wander the Doctor, looking very much like an eager child let loose in a sweet shop."

Troughton left Doctor Who in 1969, following the story entitled "The War Games." He would return to the role three times, guest-starring in the 1973 10th anniversary adventure, "The Three Doctors," the 1983 20th anniversary special, "The Five Doctors," and alongside Sixth Doctor Colin Baker in 1985's "The Two Doctors."

In the meantime, Troughton built a reputation as one of British television's finest character actors, with roles in The Six Wives of Henry VIII and All Creatures Great and Small. His other fantasy and science-fiction roles include appearances in Ray Harryhausen's Jason and the Argonauts(1963), and Sinbad and the Eye of the Tiger (1977), The Curse of Frankenstein (1957), The Phantom of the Opera (1962), The Gorgon (1964), The Scars of Dracula (1970), Frankenstein and the Monster from Hell (1973), The Omen (1976), and BBC's The Box of Delights, broadcast in the United States on the PBS series Wonderworks.

Troughton was perhaps the least well-known of the Doctors to American fans. Only five of his adventures survive in complete form, and they weren't syndicated in the United States until 1985. In addition, Troughton had a reputation as a reluctant interview. He explained that reticence in STARLOG #89: "If, as a character actor, you go around promoting your own personality, you're defeating the very thing you're trying to achieve as an actor, which is to be anonymous as a person, and only emerge as somebody else on screen.

"That's the main reason I've stayed away from interviews. It's like a conjurer telling you how he does his tricks all the time." (Another interview with Troughton will be published in a future STARLOG.)

Troughton is survived by his wife, four sons, and two daughters. Two of his sons, Michael and David, are also actors. Keeping Who in the family, David appeared in the 1972 story, "The Curse of Peladon."

The actor attempted to separate himself from his popular persona. "When I finished in the role, I was fairly young, and I had to get back to the variety of roles which I had been doing. Otherwise, if you stay too long, you come into a play and everyone says, 'Oh, it's Doctor Who!' And that's no good. You must try and get them to for-get—hoodwink them into forgetting."

Patrick Troughton finally accepted his fame, which is just as well, since all Doctor Who fans will always fondly remember the Second Doctor.

Caption: A "space-age Charlie Chaplin," Patrick Troughton cavorted as the second Incarnation of Doctor Who.

Caption: During his Who heyday, Patrick Troughton played the Second Doctor as a sort of "cosmic hobo."