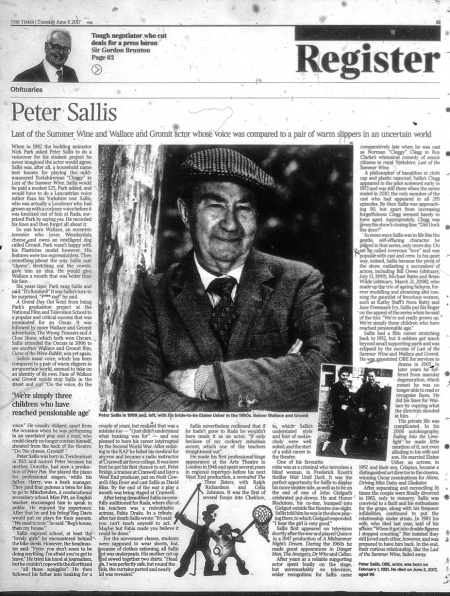 When in 1982 the budding animator Nick Park asked Peter Sallis to do a voiceover for his student project he never imagined the actor would agree. Sallis was, after all, a household name best known for playing the mild-mannered Yorkshireman "Cleggy" in Last of the Summer Wine. Sallis would be paid a modest £25, Park added, and would have to do a Lancastrian voice rather than his Yorkshire one. Sallis, who was actually a Londoner who had grown up with a cockney voice before it was knocked out of him at Rada, surprised Park by saying yes. He recorded his lines and then forgot all about it.

So was born Wallace, an eccentric inventor who loves Wensleydale cheese and owns an intelligent dog called Gromit. Park wasn't happy with his Plasticine model however. His features were too expressionless. Then something about the way Sallis said "cheese", stretching out the vowels, gave him an idea. He would give Wallace a mouth that was wider than his face.

Six years later, Park rang Sallis and said: "It's finished!" It was Sallis's turn to be surprised. "F*** me!" he said.

A Grand Day Out went from being Park's graduation project at the National Film and Television School to a popular and critical success that was nominated for an Oscar. It was followed by more Wallace and Gromit adventures, The Wrong Trousers and A Close Shave, which both won Oscars. Sallis attended the Oscars in 2006 to see another Wallace and Gromit film, Curse of the Were-Rabbit, win yet again.

Sallis's nasal voice, which has been compared to a pair of warm slippers in an uncertain world, seemed to take on an identity of its own. Fans of Wallace and Gromit would stop Sallis in the street and say: "Do the voice, do the voice." He usually obliged, apart from the occasion when he was performing in an unrelated play and a man, who could clearly no longer contain himself, shouted from the back of the theatre: "Do 'No cheese, Gromit!' " Peter Sallis was born in Twickenham in 1921 and named Peter because his mother, Dorothy, had seen a production of Peter Pan. She played the piano for professional singers, while his father, Harry, was a bank manager. They paid four guineas a term for him to go to Minchenden, a coeducational secondary school. Miss Pitt, an English teacher, encouraged him to speak in public. He enjoyed the experience. After that he and his friend Reg Davis would put on plays for their parents. "We used to tour," he said. "Reg's house, then my house."

Sallis enjoyed school, at least the "lovely girls" he encountered behind the bike sheds. However, the headmaster said: "Peter, you don't seem to be doing anything. I'm afraid you've got to leave." He tried his hand at journalism, but he couldn't cope with the shorthand - "all those squiggles". He then followed his father into banking for a couple of years, but realised that was a mistake too - "I just didn't understand what banking was for" - and was pleased to have his ca-reer interrupted by the Second World War. After enlisting in the RAF he failed his medical for aircrew and became a radio instructor at Cranwell air force college. It was here that he got his first chance to act. Peter Bridge, a trainee at Cranwell and later a West End producer, put on Noël Coward's Hay Fever and cast Sallis as David Bliss. By the end of the war a play a month was being staged at Cranwell.

After being demobbed Sallis successfully auditioned for Rada, where one of his teachers was a redoubtable actress, Fabia Drake. In a tribute after her death Sallis wrote: "It's said you can't teach anyone to act. Maybe: but Fabia made you believe it could be done."

For the movement classes, students were supposed to wear shorts, but, because of clothes rationing, all Sallis got was underpants. His mother cut up and sewed together two shirts. "Head on, I was perfectly safe, but round the side, the curtains parted and nearly all was revealed."

Sallis nevertheless reckoned that if he hadn't gone to Rada he wouldn't have made it as an actor, "if only because of my cockney suburban accent, which one of the teachers straightened out".

He made his first professional stage appearance at the Arts Theatre in London in 1946 and spent several years in regional repertory before his next West End production, a revival of The Three Sisters, with Ralph Richardson and Celia Johnson. It was the first of several forays into Chekhov, to which Sallis's understated style and hint of melancholy were well suited, and the start of a solid career in the theatre.

One of his favourite roles was as a criminal who terrorises a blind woman, in Frederick Knott's thriller Wait Until Dark. It was the perfect opportunity for Sallis to display his more sinister side, as well as to be on the end of one of John Giel-gud's celebrated put-downs. He and Honor Blackman, his co-star, bumped into Gielgud outside the theatre one night. Sallis told him he was in the show playing there, to which Gielgud responded: "I hear the girl is very good."

Sallis first appeared on television shortly after the war and played Quince in a 1947 production of A Midsummer Night's Dream. During the 1960s he made guest appearances in Danger Man, The Avengers, Dr Who and Callan. After years as a reliable supporting actor spent busily on the stage, but unremarkably on television, wider recognition for Sallis came comparatively late when he was cast as Norman "Cleggy" Clegg in Roy Clarke's whimsical comedy of senior citizens in rural Yorkshire, Last of the Summer Wine.

A philosopher of banalities in cloth cap and plastic raincoat, Sallis's Clegg appeared in the pilot screened early in 1973 and was still there when the series ended in 2010, the only member of the cast who had appeared in all 295 episodes. By then Sallis was approaching 90, but apart from increasing forgetfulness Clegg seemed barely to have aged. Appropriately, Clegg was given the show's closing line: "Did I lock the door?" In some ways Sallis was in life like the gentle, self-effacing character he played in that series, only more shy. On set he called everyone "love" and was popular with cast and crew. In his quiet way, indeed, Sallis became the pivot of the show, outlasting a succession of actors, including Bill Owen (obituary, July 13, 1999), Michael Bates and Brian Wilde (obituary, March 21, 2008), who made up the trio of ageing failures, forever muddling and dreaming and running the gauntlet of ferocious women, such as Kathy Staff's Nora Batty and Jane Freeman's Ivy. Sallis put his finger on the appeal of the series when he said of the trio: "We're not really grown up. We're simply three children who have reached pensionable age."

Sallis had a film career stretching back to 1952, but it seldom got much beyond small supporting parts and was eclipsed by the success of Last of the Summer Wine and Wallace and Gromit.

He was appointed OBE for services to drama in 2007. In later years he suffered from macular degeneration, which meant he was no longer able to read or recognise faces. He did his lines for Wallace by copying what the directors shouted at him.

His private life was complicated. In his 2006 autobiography, Fading Into the Limelight he made little mention of it, not even alluding to his wife and son. He married Elaine Usher, an actress, in 1957, and their son, Crispian, became a distinguished art director in the cinema, winning Oscar nominations for Aliens, Driving Miss Daisy and Gladiator.

After separating and reconciling 16 times the couple were finally divorced in 1965, only to remarry. Sallis was convivial to a fault and his enthusiasm for the grape, along with his frequent infidelities, continued to put the relationship under strain. In 1983 his wife, who died last year, said of his affairs: "When it got into double figures I stopped counting." She insisted they still loved each other, however, and was prepared to have him back. In the end, their curious relationship, like the Last of the Summer Wine, faded away.

Caption: Peter Sallis in 1999 and, left, with his bride-to-be Elaine Usher in the 1950s. Below: Wallace and Gromit