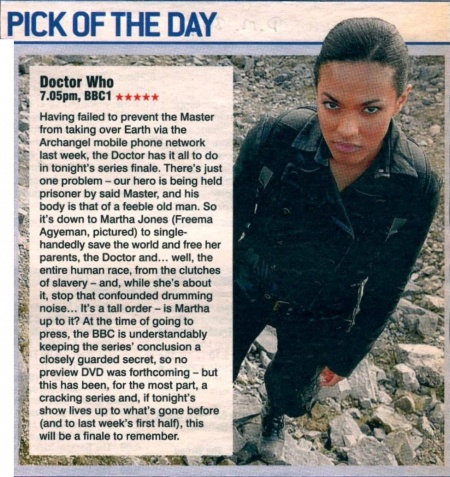 Having failed to prevent the Master from taking over Earth via the Archangel mobile phone network last week, the Doctor has it all to do in tonight's series finale. There's just one problem - our hero is being held prisoner by said Master, and his body is that of a feeble old man. So it's down to Martha Jones (Freema Agyeman, pictured) to single-handedly save the world and free her parents, the Doctor and... well, the entire human race, from the clutches of slavery - and, while she's about it, stop that confounded drumming noise... It's a tall order - is Martha up to it? At the time of going to press, the BBC is understandably keeping the series' conclusion a closely guarded secret, so no preview DVD was forthcoming - but this has been, for the most part, a cracking series and, if tonight's show lives up to what's gone before (and to last week's first half), this will be a finale to remember.