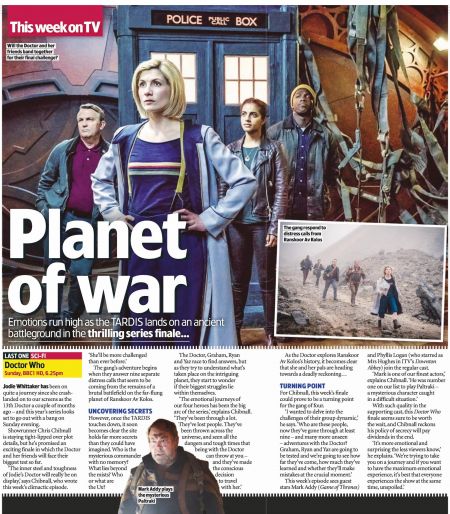 Will the Doctor and her friends band together for their final challenge?

Emotions run high as the TARDIS lands on an a battleground in the thrilling series finale...

Jodie Whittaker has been on quite a journey since she crash-landed on to our screens as the 13th Doctor a couple of months ago — and this year's series looks set to go out with a bang on Sunday evening.

Showrunner Chris Chibnall is staying tight-lipped over plot details, but he's promised an exciting finale in which the Doctor and her friends will face their biggest test so far.

'The inner steel and toughness of Jodie's Doctor will really be on display; says Chibnall, who wrote this week's climactic episode. 'she'll be more challenged than ever before:

The gang's adventure begins when they answer nine separate distress calls that seem to be coming from the remains of a brutal battlefield on the far-flung planet of Ranskoor Av Kolos.

However, once the TARDIS touches down, it soon becomes clear the site holds far more secrets than they could have imagined. Who is the mysterious commander with no memory? What lies beyond the mists? Who or what are the Ux?

The Doctor, Graham, Ryan and Yaz race to find answers, but as they try to understand what's taken place on the intriguing planet, they start to wonder if their biggest struggles lie within themselves.

'The emotional journeys of our four heroes has been the big arc of the series: explains Chibnall. 'They've been through a lot. They've lost people. They've been thrown across the universe, and seen all the dangers and tough times that being with the Doctor can throw at you — and they've made the conscious decision to travel with her.'

As the Doctor explores Ranskoor Av Kolos's history, it becomes clear that she and her pals are heading towards a deadly reckoning...

For Chibnall, this week's finale could prove to be a turning point for the gang of four.

'I wanted to delve into the challenges of their group dynamic, he says. 'Who are these people, now they've gone through at least nine — and many more unseen — adventures with the Doctor? Graham, Ryan and Yaz are going to be tested and were going to see how far they've come, how much they've learned and whether they'll make mistakes at the crucial moment:

'Mark is one of our finest actors, explains Chibnall. He was number one on our list to play Paltraki — a mysterious character caught in a difficult situation:

With such quality in the supporting cast, this Doctor Who finale seems sure to be worth the wait, and Chibnall reckons his policy of secrecy will pay dividends in the end.

It's more emotional and surprising the less viewers know, he explains. We're trying to take you on a journey and if you want to have the maximum emotional experience, it's best that everyone experiences the show at the same time, unspoiled.'