Plea for new 'Dr Who' 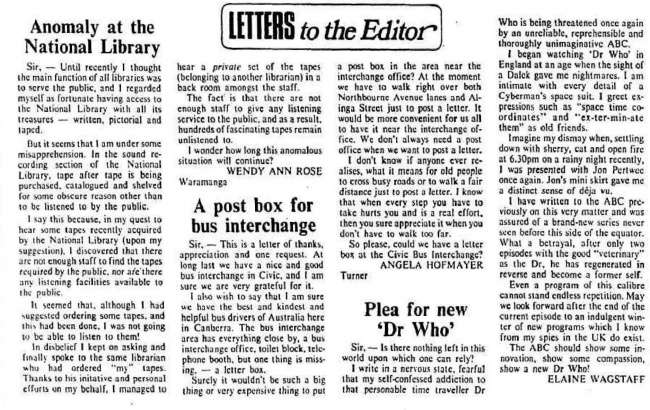 Sir, - Is there nothing left in this world upon which one can rely?

I write in a nervous state, fearful that my self-confessed addiction to that personable time traveller Dr Who is being threatened once again by an unreliable, reprehensible and thoroughly unimaginative ABC.

I began watching 'Dr Who' in England at an age when the sight of a Dalek gave me nightmares. I am intimate with every detail of a Cyberman's space suit. I greet ex- pressions such as "space time coordinates" and "ex-ter-min-ate them" as old friends.

Imagine my dismay when, settling down with sherry, cat and open fire at 6.30pm on a rainy night recently, I was presented with Jon Pertwee once again. Jon's mini skirt gave me a distinct sense of deja vu.

I have written to the ABC previously on this very matter and was assured of a brand-new series never seen before this side of the equator. What a betrayal, after only two episodes with the good "veterinary" as the Dr, he has regenerated in reverse and become a former self.

Even a program of this calibre cannot stand endless repetition. May we look forward after the end of the current episode to an indulgent winter of new programs which I know from my spies in the UK do exist.

The ABC should show some innovation, show some compassion, show a new Dr Who!