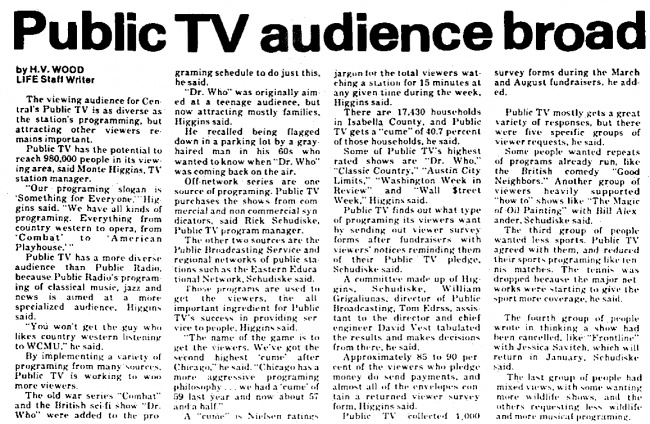 The viewing audience for Central Public TV is as diverse as the station's programming, but attracting other viewers remains important.

"Our programming slogan is 'Something for everyone,'" Higgins said. "We have all kinds of programming. Everything from country western to opera, from 'Combat' to American Playhouse.'"

Public TV has a more diverse audience than public radio because public radio's programming of classical music, jazz and news is aimed at a more specialized audience, Higgins said.

"You won't get the guy who likes country western listening to WCMU," he said.

By implementing a variety of programming from many sources, a public TV is working to woo more viewers.

The old war series "Combat" and the British sci fi show "Dr. Who" were added to the programming schedule to do just this, he said.

"Dr. Who" was originally aimed at a teenaage audience, but now attracting mostly families, Higgins said.

The other two sources are the public broadcasting service and regional networks of public stations such as the Eastern Educational Network, Rick Schudiske said.

Those programs are used to get the viewers, the all important ingredient for public TV success in providing service to people, Higgins said.

"The name of the game is to get viewers. We've got the second highest 'cume' after Chicago, he said. "Chicago has a more aggressive programming philosophy... we had a 'cume' of 59 last year and now all about 57 and a half."

The "cume" is Nielsen ratings jargon for the total viewers watching a station for 15 minutes in any given time during the week, Higgins said.

Public TV finds out what type of programming its viewers watched by sending a viewer survey forms after fundraisers with viewers' notices reminding them of their public TV pledge, Rick Schudiske said.

A committee made up of Higgins, Rick Schudiske, William Grigaliunas, director of public broadcasting, Tom Edres, assistant to the director and chief engineer David Vest tabulated the results, and makes decisions from there, he said.

Approximately 85 to 90 persent of the viewers who pledge money do send payments, and almost all of the envelopes containing return of your survey form, Higgins said.

Public TV collected 5,000 survey forms during the March and August fundraisers, he added.

Public TV mostly gets a great variety of responses, but there were five specific groups of viewers, he said.

The third group of people wastes wanted less sports. Public TV agreed with them, and reduce their sports programming like tennis matches. The tennis was dropped because the major networks were starting to give the sport more coverage, he said.

The fourth group of people wrote in thinking a show had been canceled, like "Frontline" with Jessica Savitch, which will return in January, Rick Schudiske said.

The last group of people had mixed reviews, with some wanting more wildlife shows, and the others requesting less wildlife and more musical programming.