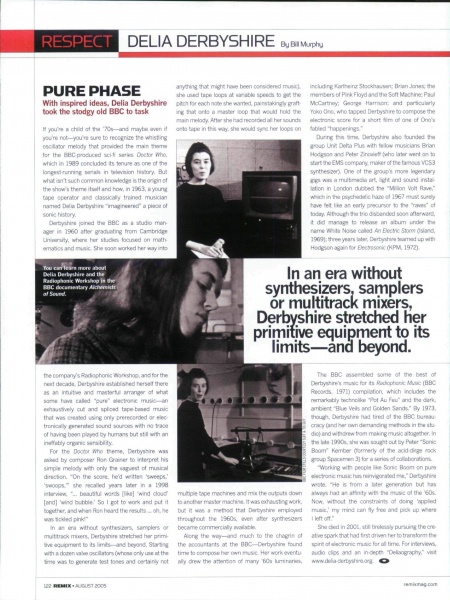 If you're a child of the '70s—and maybe even if you're not—you're sure to recognize the whistling oscillator melody that provided the main theme for the BBC-produced sci-fi series Doctor Who, which in 1989 concluded its tenure as one of the longest-running serials in television history. But what isn't such common knowledge is the origin of the show's theme itself and how, in 1963, a young tape operator and classically trained musician named Delia Derbyshire "imagineered" a piece of sonic history.

Derbyshire joined the BBC as a studio manager in 1960 after graduating from Cambridge University, where her studies focused on mathematics and music. She soon worked her way into the company's Radiophonic Workshop, and for the next decade, Derbyshire established herself there as an intuitive and masterful arranger of what some have called "pure" electronic music—an exhaustively cut and spliced tape-based music that was created using only prerecorded or electronically generated sound sources with no trace of having been played by humans but still with an ineffably organic sensibility.

For the Doctor Who theme, Derbyshire was asked by composer Ron Grainer to interpret his simple melody with only the vaguest of musical direction. "On the score, he'd written 'sweeps,' 'swoops,'" she recalled years later in a 1998 interview, "... beautiful words [like] 'wind cloud' [and] 'wind bubble.' So I got to work and put it together, and when Ron heard the results ... oh, he was tickled pink!"

In an era without synthesizers, samplers or multitrack mixers, Derbyshire stretched her primitive equipment to its limits—and beyond. Starting with a dozen valve oscillators (whose only use at the time was to generate test tones and certainly not anything that might have been considered music), she used tape loops at variable speeds to get the pitch for each note she wanted, painstakingly grafting that onto a master loop that would hold the main melody. After she had recorded all her sounds onto tape in this way, she would sync her loops on multiple tape machines and mix the outputs down to another master machine. It was exhausting work, but it was a method that Derbyshire employed throughout the 1960s, even after synthesizers became commercially available.

Along the way—and much to the chagrin of the accountants at the BBC—Derbyshire found time to compose her own music. Her work eventually drew the attention of many '60s luminaries, including Karlheinz Stockhausen; Brian Jones; the members of Pink Floyd and the Soft Machine; Paul McCartney; George Harrison; and particularly Yoko Ono, who tapped Derbyshire to compose the electronic score for a short film of one of Ono's fabled "happenings."

During this time. Derbyshire also founded the group Unit Delta Plus with fellow musicians Brian Hodgson and Peter Zinovieff (who later went on to start the EMS company, maker of the famous VCS3 synthesizer). One of the group's more legendary gigs was a multimedia art, light and sound installation in London dubbed the "Million Volt Rave," which in the psychedelic haze of 1967 must surely have felt like an early precursor to the "raves" of today. Although the trio disbanded soon afterward, it did manage to release an album under the name White Noise called An Electric Storm (Island, 1969); three years later, Derbyshire teamed up with Hodgson again for Electrosonic (KPM, 1972).

The BBC assembled some of the best of Derbyshire's music for its Radiophonic Music (BBC Records, 1971) compilation, which includes the remarkably technolike "Pot Au Feu" and the dark, ambient "Blue Veils and Golden Sands." By 1973, though, Derbyshire had tired of the BBC bureaucracy (and her own demanding methods in the studio) and withdrew from making music altogether. In the late 1990s, she was sought out by Peter "Sonic Boom" Kember (formerly of the acid-dirge rock group Spacemen 3) for a series of collaborations.

"Working with people like Sonic Boom on pure electronic music has reinvigorated me," Derbyshire wrote. "He is from a later generation but has always had an affinity with the music of the '60s. Now, without the constraints of doing 'applied music,' my mind can fly free and pick up where I left off."

She died in 2001, still tirelessly pursuing the creative spark that had first driven her to transform the spirit of electronic music for all time. For interviews, audio clips and an in-depth "Deliaography," visit www.delia-derbyshire.org.

Caption: You can learn more about Delia Derbyshire and the Radiophonic Workshop in the BBC documentary Alchemists of Sound.