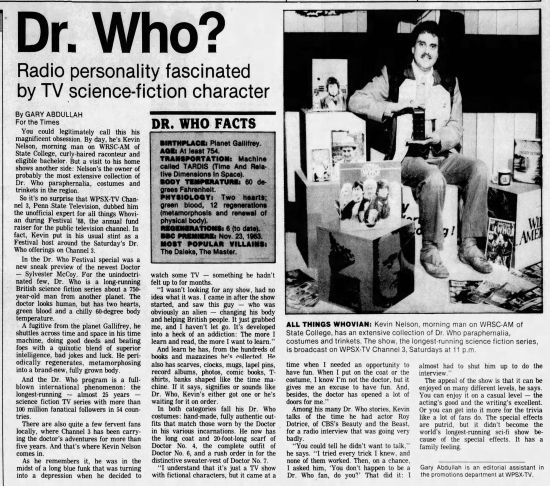 You could legitimately call this his magnificent obsession. By day, he's Kevin Nelson, morning man on WRSC-AM of State College, curly-haired raconteur and eligible bachelor. But a visit to his home shows another side: Nelson's the owner of probably the most extensive collection of Dr. Who paraphernalia, costumes and trinkets in the region.

So it's no surprise that WPSX-TV Channel 3, Penn State Television, dubbed him the unofficial expert for all things Whovian during Festival '88, the annual fund raiser for the public television channel. In fact, Kevin put in his usual stint as a Festival host around the Saturday's Dr. Who offerings on Channel 3.

In the Dr. Who Festival special was a new sneak preview of the newest Doctor — Sylvester McCoy. For the unindoctrinated few, Dr. Who is a long-running British science fiction series about a 750-year-old man from another planet. The doctor looks human, but has two hearts, green blood and a chilly 60-degree body temperature.

A fugitive from the planet Gallifrey, he shuttles across time and space in his time machine, doing good deeds and beating foes with a quixotic blend of superior intelligence, bad jokes and luck. He periodically regenerates, metamorphosing into a brand-new, fully grown body.

And the Dr. Who program is a full-blown international phenomenon: the longest-running — almost 25 years —science fiction TV series with more than 100 million fanatical followers in 54 countries.

There are also quite a few fervent fans locally, where Channel 3 has been carrying the doctor's adventures for more than five years. And that's where Kevin Nelson comes in.

As he remembers it, he was in the midst of a long blue funk that was turning into a depression when he decided to watch some TV — something he hadn't felt up to for months.

"I wasn't looking for any show, had no idea what it was. I came in after the show started, and saw this guy — who was obviously an alien — changing his body and helping British people. It just grabbed me, and I haven't let go. It's developed into a heck of an addiction: The more I learn and read, the more I want to learn."

And learn he has, from the hundreds of books and magazines he's collected. He also has scarves, clocks, mugs, lapel pins, record albums, photos, comic books, T-shirts, banks shaped like the time machine. If it says, signifies or sounds like Dr. Who, Kevin's either got one or he's waiting for it on order.

In both categories fall his Dr. Who costumes: hand-made, fully authentic outfits that match those worn by the Doctor in his various incarnations. He now has the long coat and 20-foot-long scarf of Doctor No. 4, the complete outfit of Doctor No. 6, and a rush order in for the distinctive sweater-vest of Doctor No. 7.

"I understand that it's just a TV show with fictional characters, but it came at a time when I needed an opportunity to have fun. When I put on the coat or the costume, I know I'm not the doctor, but it gives me an excuse to have fun. And, besides, the doctor has opened a lot of doors for me."

Among his many Dr. Who stories, Kevin talks of the time he had actor Roy Dotrice, of CBS's Beauty and the Beast, for a radio interview that was going very badly.

"You could tell he didn't want to talk," he says. "I tried every trick I knew, and none of them worked. Then, on a chance, I asked him, 'You don't happen to be a Dr. Who fan, do you?' That did it: I almost had to shut him up to do the interview."

The appeal of the show is that it can be enjoyed on many different levels, he says. You can enjoy it on a casual level — the acting's good and the writing's excellent. Or you can get into it more for the trivia like a lot of fans do. The special effects are putrid, but it didn't become the world's longest-running sci-fi show because of the special effects. It has a family feeling.

Gary Abdullah is an editorial assistant in the promotions department at WPSX-TV.

Caption: ALL THINGS WHOVIAN: Kevin Nelson, morning man on WRSC-AM of State College, has an extensive collection of Dr. Who paraphernalia, costumes and trinkets. The show, the longest-running science fiction series, is broadcast on WPSX-TV Channel 3. Saturdays at 11 p.m.

MOST POPULAR VILLAINS: The Daleks, The Master.