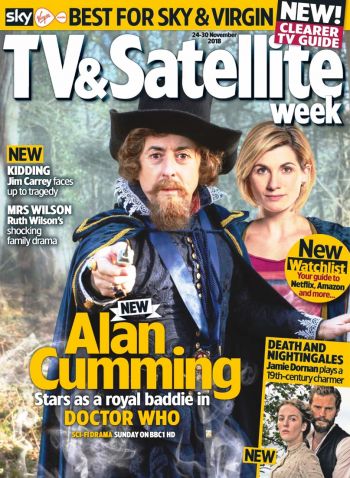 We knew there'd be some fantastic moments in store when Jodie Whittaker exploded on to our screens as the new Doctor last month, but Sunday's episode has the potential to be one of the highlights of this year's series.

Showrunner Chris Chibnall is renowned for keeping episode details closely guarded and he wasn't happy when the Scottish actor let the cat out of the bag in March.

'I'm playing King James as a nice baddie,' he continues. 'I decided to do his voice like those politicians who are from Scotland, like Malcolm Rifkind and Michael Forsyth, but who are trying to pretend they are from England with a strange hybrid of the accents. So I played King James in honour of them. He's a kind of dandy, foppy, coward who kind of comes all right in the end. And the producers have said the character might come back.'

Whether The Good Wife and Instinct star will reprise his royal role at a later date remains to be seen, but Sunday's adventure should be a real treat.

The tale begins when the Doctor, Ryan, Graham and Yaz arrive in 1600s Lancashire and become embroiled in a witch trial at Bilehurst Cragg run by a local landowner.

As fear stalks the land, the arrival of King James intensifies the witch hunt. The king's fascination with the dark arts consigned hundreds of innocent women to the flames.

But, as the Doctor investigates, is there something even more dangerous at work? Can the Time Lord and her pals keep the people of Bilehurst Cragg safe from all the forces that are massing about them?

In previous years, he has turned down possible TV roles in the UK because of the British climate – and that even included the chance to play the Doctor a few years ago.

'They didn't offer me the job, but I was approached about it,' he recalls. 'I still have a flat in London, so I assumed I'd be staying there during filming. Then they told me it would be an eight-month shoot in Cardiff and I said, "What?"

I think that's what possibly blew it. Nothing against Cardiff, but...'

The story was written by Joy Wilkinson, who grew up in Burnley, just a few miles from Pendle Hill, a place that's famed for its connections to witchcraft and black magic.

It gained notoriety during King James' reign, in 1612, after an alleged sorceress was

hanged in one of the most famous witch trials in British history – and that gave the writer inspiration for her script, which she describes as 'dark, funny and squelchy'.

'I've always loved Doctor Who and felt like it might be a good fit for me,' she says. 'But I knew it was really hard to get on to. So frankly I'm still pinching myself to be here.'

A lot of Wilkinson's previous writing has focused on strong female characters, so she was especially delighted when Jodie Whittaker was cast as the Doctor.

'I have always been interested in writing heroines who aren't bound by ideas of what women should do,' she says. 'So I've been in my element on Doctor Who. It feels like an exciting time for women in drama.'

Joanna Page played the Virgin Queen in a 2013 special which saw her lock lips with David Tennant's Doctor, who had mistaken the monarch for a Zygon.

In this 2011 episode, the Merry Monarch discovered a naked 11th Doctor (Matt Smith) hiding beneath the skirts of aristocrat Matilda, who had been painting him.

The Time Lord has had a few run-ins with Her Majesty, including a 2006 adventure which saw David Tennant coming to her rescue when alien criminal the Wire tried to invade Earth.

In 2006 the Doctor and Rose stopped a plot to turn Queen Victoria (Pauline Collins) into a werewolf and were knighted.

In this 1983 episode, the Master used his shape-shifting robot Kamelion to impersonate King John in order to provoke a rebellion that would stop him signing the Magna Carta. The fifth Doctor – Peter Davison – saw through the ruse.

The TARDIS turned up in 12th-century Palestine during the Third Crusade in a 1965 story. The first Doctor, William Hartnell, got Richard the Lionheart's help when companion Barbara was held captive by Saladin.

Caption: Joanna Page as Elizabeth I