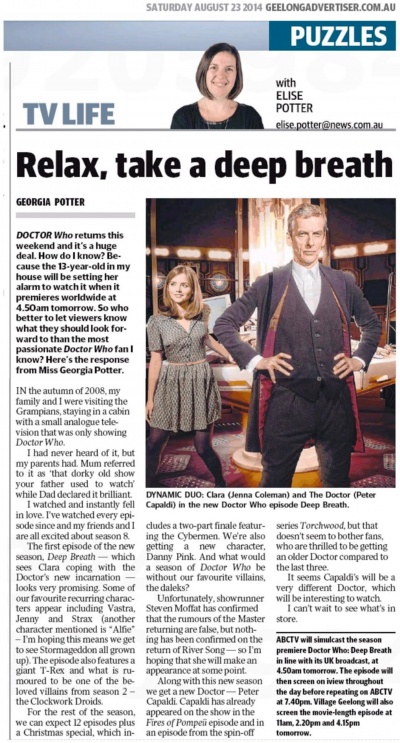 DOCTOR Who returns this weekend and it's a huge deal. How do I know? Because the 13-year-old in my house will be setting her alarm to watch it when it premieres worldwide at 4.50am tomorrow. So who better to let viewers know what they should look forward to than the most passionate Doctor Who fan I know? Here's the response from Miss Georgia Potter.

IN the autumn of 2008, my family and I were visiting the Grampians, staying in a cabin with a small analogue television that was only showing Doctor Who.

I had never heard of it, but my parents had. Mum referred to it as 'that dorky old show your father used to watch' while Dad declared it brilliant.

I watched and instantly fell in love. I've watched every episode since and my friends and I are all excited about season 8.

The first episode of the new season, Deep Breath — which sees Clara coping with the Doctor's new incarnation —looks very promising. Some of our favourite recurring characters appear including Vastra, Jenny and Strax (another character mentioned is 'Alfie' - I'm hoping this means we get to see Stormageddon all grown up). The episode also features a giant T-Rex and what is rumoured to be one of the beloved villains from season 2 the Clockwork Droids.

For the rest of the season, we can expect 12 episodes plus a Christmas special, which includes a two-part finale featuring the Cybermen. We're also getting a new character, Danny Pink. And what would a season of Doctor Who be without our favourite villains, the daleks?

Unfortunately, showrunner Steven Moffat has confirmed that the rumours of the Master returning are false, but nothing has been confirmed on the return of River Song— so I'm hoping that she will make an appearance at some point.

Along with this new season we get a new Doctor— Peter Capaldi. Capaldi has already appeared on the show in the Fires of Pompeii episode and in an episode from the spin-off series Torchwood, but that doesn't seem to bother fans. who are thrilled to be getting an older Doctor compared to the last three.

It seems Capaldi's will be a very different Doctor, which will be interesting to watch.

I can't wait to see what's in store.

ABCTV will simulcast the season premiere Doctor Who: Deep Breath in line with its UK broadcast, at 4.50am tomorrow. The episode will then screen on iview throughout the day before repeating on ABCTV at 7.40pm. Village Geelong will also screen the movie-length episode at 11am. 2.20pm and 4.15pm tomorrow.