Return of the Daleks 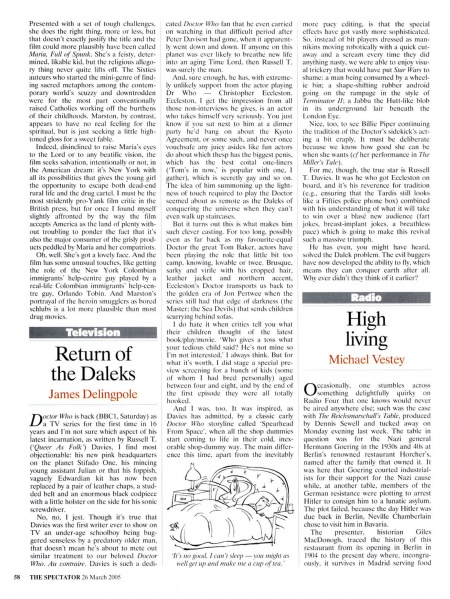 Doctor Who is back (BBC1, Saturday) as a TV series for the first time in 16 years and I'm not sure which aspect of his latest incarnation, as written by Russell T. ('Queer As Folk') Davies, I find most objectionable: his new pink headquarters on the planet Stifado One, his mincing young assistant Julian or that his foppish, vaguely Edwardian kit has now been replaced by a pair of leather chaps, a studded belt and an enormous black codpiece with a little holster on the side for his sonic screwdriver.

No, no, I jest. Though it's true that Davies was the first writer ever to show on TV an under-age schoolboy being buggered senseless by a predatory older man, that doesn't mean he's about to mete out similar treatment to our beloved Doctor Who. Au contraire. Davies is such a dedicated Doctor Who fan that he even carried on watching in that difficult period after Peter Davison had gone, when it apparently went down and down. If anyone on this planet was ever likely to breathe new life into an aging Time Lord, then Russell T. was surely the man.

And, sure enough, he has, with extremely unlikely support from the actor playing Dr Who - Christopher Eccleston. Eccleston, I get the impression from all those non-interviews he gives, is an actor who takes himself very seriously. You just know if you sat next to him at a dinner party he'd bang on about the Kyoto Agreement, or some such, and never once vouchsafe any juicy asides like fun actors do about which thesp has the biggest penis, which has the best coital one-liners ('Tom's in now,' is popular with one, I gather), which is secretly gay and so on. The idea of him summoning up the lightness of touch required to play the Doctor seemed about as remote as the Daleks of conquering the universe when they can't even walk up staircases.

But it turns out this is what makes him such clever casting. For too long, possibly even as far back as my favourite-equal Doctor the great Tom Baker, actors have been playing the role that little bit too camp, knowing, lovable or twee. Brusque, sarky and virile with his cropped hair, leather jacket and northern accent, Eccleston's Doctor transports us back to the golden era of Jon Pertwee when the series still had that edge of darkness (the Master; the Sea Devils) that sends children scurrying behind sofas.

I do hate it when critics tell you what their children thought of the latest book/play/movie. 'Who gives a toss what your tedious child said? He's not mine so I'm not interested,' I always think. But for what it's worth, I did stage a special preview screening for a bunch of kids (some of whom I had bred personally) aged between four and eight, and by the end of the first episode they were all totally hooked.

And I was, too. It was inspired, as Davies has admitted, by a classic early Doctor Who storyline called 'Spearhead From Space', when all the shop dummies start coming to life in their cold, inexorable shop-dummy way. The main difference this time, apart from the inevitably more pacy editing, is that the special effects have got vastly more sophisticated. So, instead of bit players dressed as mannikins moving robotically with a quick cut-away and a scream every time they did anything nasty, we were able to enjoy visual trickery that would have put Star Wars to shame: a man being consumed by a wheelie bin; a shape-shifting rubber android going on the rampage in the style of Terminator II; a Jabba the Hutt-like blob in its underground lair beneath the London Eye.

Nice, too, to see Billie Piper continuing the tradition of the Doctor's sidekick's acting a bit craply. It must be deliberate because we know how good she can be when she wants (cf her performance in The Miller's Tale).

For me, though, the true star is Russell T. Davies. It was he who got Eccleston on board, and it's his reverence for tradition (e.g., ensuring that the Tardis still looks like a Fifties police phone box) combined with his understanding of what it will take to win over a blasé new audience (fart jokes, breast-implant jokes, a breathless pace) which is going to make this revival such a massive triumph.

He has even, you might have heard, solved the Dalek problem. The evil buggers have now developed the ability to fly, which means they can conquer earth after all. Why ever didn't they think of it earlier?