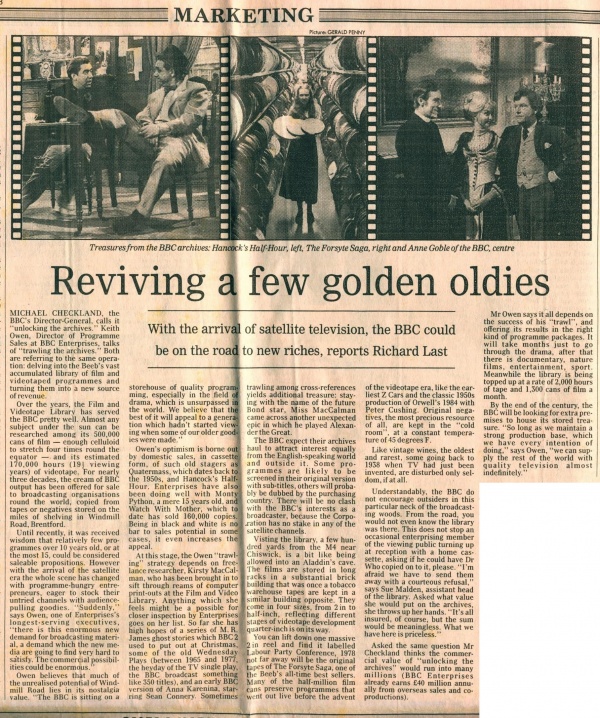 With the arrival of satellite television, the BBC could be on the road to new riches, reports Richard Last

MICHAEL CHECKLAND, the BBC's Director-General, calls it "unlocking the archives." Keith Owen, Director of Programme Sales at BBC Enterprises, talks of "trawling the archives." Both are referring to the same operation: delving into the Beeb's vast accumulated library of film and videotaped programmes and turning them into a new source of revenue.

Over the years, the Film and Videotape Library has served the BBC pretty well. Almost any subject under the sun can be researched among its 500,000 cans of film — enough celluloid to stretch four times round the equator — and its estimated 170,000 hours (19 1/2 viewing years) of videotape. For nearly three decades, the cream of BBC output has been offered for sale to broadcasting organisations round the world, copied from tapes or negatives stored on the miles of shelving in Windmill Road, Brentford.

Until recently, it was received wisdom that relatively few programmes over 10 years old, or at the most 15, could be considered saleable propositions. However with the arrival of the satellite era the whole scene has changed with programme-hungry entrepreneurs, eager to stock their untried channels with audience-pulling goodies. "Suddenly," says Owen, one of Enterprises's longest-serving executives, "there is this enormous new demand for broadcasting material, a demand which the new media are going to find very hard to satisfy. The commercial possibilities could be enormous."

Owen believes that much of the unrealised potential of Windmill Road lies in its nostalgia value. "The BBC is sitting on a storehouse of quality programming, especially in the field drama, which is unsurpassed the world. We believe that t best of it will appeal to a generation which hadn't started viewing when some of our older goodies were made."

Owen's optimism is borne o by domestic sales, in cassette form, of such old stagers a Quatermass, which dates back the 1950s, and Hancock's Half Hour. Enterprises have also been doing well with Monty Python, a mere 15 years old, and Watch With Mother, which to date has sold 160,000 copies. Being in black and white is n bar to sales potential in some cases, it even increases the appeal.

At this stage, the Owen "trawling" strategy depends on freelance researcher, Kirsty MacCalman, who has been brought in to sift through reams of computer print-outs at the Film and Video Library. Anything which she feels might be a possible for closer inspection by Enterprise goes on her list. So far she has high hopes of a series of M. R. James ghost stories which BBC 2 used to put out at Christmas, some of the old Wednesday Plays (between 1965 and 1977, the heyday of the TV single play, the BBC broadcast something like 350 titles), and an early BBC version of Anna Karenina, starring Sean Connery. Sometimes trawling among cross-references yields additional treasure: staying with the name of the future Bond star, Miss MacCalman came across another unexpected epic in which he played Alexander the Great.

The BBC expect their archives haul to attract interest equally from the English-speaking world and outside it. Some programmes are likely to be screened in their original version with sub-titles, others will probably be dubbed by the purchasing country. There will be no clash with the BBC's interests as a broadcaster, because the Corporation has no stake in any of the satellite channels.

Visting the library, a few hundred yards from the M4 near Chiswick, is a bit like being allowed into an Aladdin's cave. The films are stored in long racks in a substantial brick building that was once a tobacco warehouse tapes are kept in a similar building opposite. They come in four sizes, from 2 in to half-inch, reflecting different stages of videotape development quarter-inch is on its way.

You can lift down one massive 2 in reel and find it labelled Labour Party Conference, 1978 not far away will be the original tapes of The Forsyte Saga, one of the Beeb's all-time best sellers. Many of the half-million film cans preserve programmes that went out live before the advent of the videotape era, like the earliest Z Cars and the classic 1950s production of Orwell's 1984 with Peter Cushing. Original negatives, the most precious resource of all, are kept in the "cold room", at a constant temperature of 45 degrees F.

Like vintage wines, the oldest and rarest, some going back to 1938 when TV had just been invented, are disturbed only seldom, if at all.

Understandably, the BBC do not encourage outsiders in this particular neck of the broadcasting woods. From the road, you would not even know the library was there. This does not stop an occasional enterprising member of the viewing public turning up at reception with a home cassette, asking if he could have Dr Who copied on to it, please. "I'm afraid we have to send them away with a courteous refusal," says Sue Malden, assistant head of the library. Asked what value she would put on the archives, she throws up her hands. "It's all insured, of course, but the sum would be meaningless. What we have here is priceless."

Asked the same question Mr Checkland thinks the commercial value of "unlocking the archives" would run into many millions (BBC Enterprises already earns £40 million annually from overseas sales and co-productions).

Mr Owen says it all depends on the success of his "trawl", and offering its results in the right kind of programme packages. It will take months just to go through the drama, after that there is documentary, nature films, entertainment, sport. Meanwhile the library is being topped up at a rate of 2,000 hours of tape and 1,300 cans of film a month.

By the end of the century, the BBC will be looking for extra premises to house its stored treasure. "So long as we maintain a strong production base, which we have every intention of doing," says Owen, "we can supply the rest of the world with quality television almost indefinitely."

Caption: Treasures from the BBC archives: Hancock's Half-Hour, left, The Forsyte Saga, right and Anne Goble of the BBC, centre