Robin Hood is still a wow in Sydney 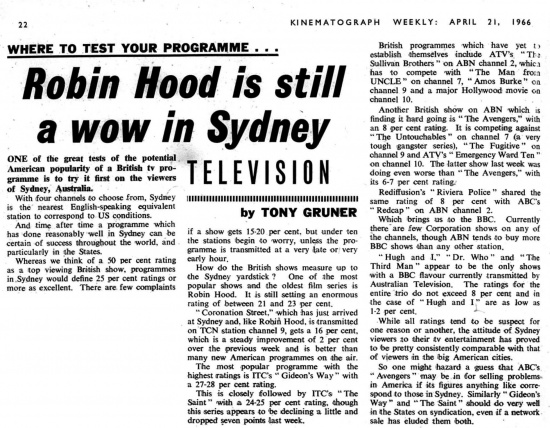 ONE of the great tests of the potential American popularity of a British tv programme is to try it first on the viewers of Sydney, Australia.

With four channels to choose from, Sydney is the nearest English-speaking equivalent station to correspond to US conditions.

And time after time a programme which has done reasonably well in Sydney can be certain of success throughout the world, and particularly in the States.

Whereas we think of a 50 per cent rating as a top viewing British show, programmes in Sydney would define 25 per cent ratings or more as excellent. There are few complaints if a show gets 15-20 per cent, but under ten the stations begin to worry, unless the programme is transmitted at a very late or very early hour.

How do the British shows measure up to the Sydney yardstick ? One of the most popular shows and the oldest film series is Robin Hood. It is still setting an enormous rating of between 21 and 23 per cent.

"Coronation Street," which has just arrived at Sydney and, like Robin Hood. is transmitted on TCN station channel 9, gets a 16 per cent, which is a steady improvement of 2 per cent over the previous week and is better than many new American programmes on the air.

The most popular programme with the highest ratings is ITC's "Gideon's Way" with a 27-28 per cent rating.

This is closely followed by ITC's "The Saint" with a 24-25 per cent rating, though this series appears to be declining a little and dropped seven points last week.

British programmes which have yet to establish themselves include ATV's "The Sullivan Brothers "on ABN channel 2, which has to compete with "The Man from UNCLE" on channel 7, "Amos Burke" on channel 9 and a major Hollywood movie on channel 10.

Rediffusion's "Riviera Police" shared the same rating of 8 per cent with ABC's "Redcap" on ABN channel 2.

Which brings us to the BBC. Currently there-are few Corporation shows on any of the channels, though ABN tends to buy more BBC shows than any other station,

"Hugh and I," "Dr. Who" and "The Third Man" appear to be the only shows with a BBC flavour currently transmitted by Australian Television. The ratings for the entire trio do not exceed 8 per cent and in the case of "Hugh and I" are as low as 1-2 per cent.

While all ratings tend to be suspect for one reason or another, the attitude of Sydney viewers to their tv entertainment has proved to be pretty consistently comparable with that of viewers in the big American cities.

So one might hazard a guess that ABC's "Avengers" may be in for selling problems in America if its figures anything like correspond to those in Sydney. Similarly "Gideon's Way" and "The Saint" should do very well in the States on syndication, even if a network sale has eluded them both.