Robots should be in the classroom? Says Who? 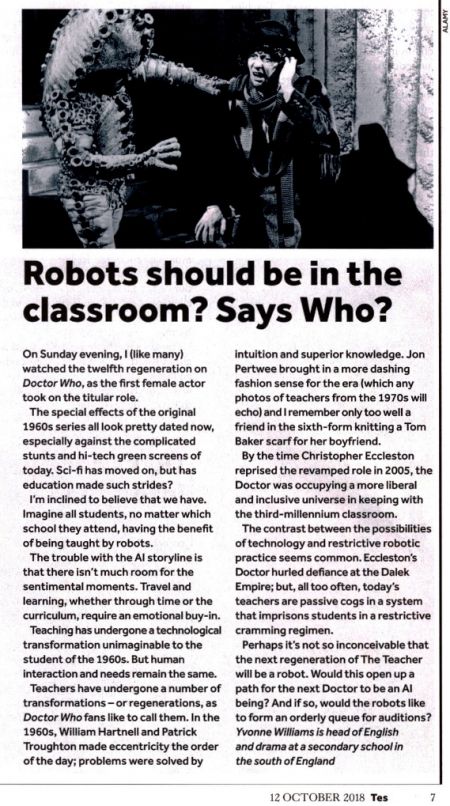 On Sunday evening, I (like many) watched the twelfth regeneration on Doctor Who, as the first female actor took on the titular role.

The special effects of the original 1960s series all look pretty dated now, especially against the complicated stunts and hi-tech green screens of today. Sci-fi has moved on, but has education made such strides? I'm inclined to believe that we have. Imagine all students, no matter which school they attend, having the benefit of being taught by robots.

The trouble with the Al storyline is that there isn't much room for the sentimental moments. Travel and learning, whether through time or the curriculum, require an emotional buy-in. Teaching has undergone a technological transformation unimaginable to the student of the 1960s. But human interaction and needs remain the same. Teachers have undergone a number of transformations — or regenerations, as Doctor Who fans like to call them. In the 1960s, William Hartnell and Patrick Troughton made eccentricity the order of the day; problems were solved by intuition and superior knowledge. Jon Pertwee brought in a more dashing fashion sense for the era (which any photos of teachers from the 1970s will echo) and I remember only too well a friend in the sixth-form knitting a Tom Baker scarf for her boyfriend.

By the time Christopher Eccleston reprised the revamped role in 2005, the Doctor was occupying a more liberal and inclusive universe in keeping with the third-millennium classroom. The contrast between the possibilities of technology and restrictive robotic practice seems common. Eccleston's Doctor hurled defiance at the Dalek Empire; but, all too often, today's teachers are passive cogs in a system that imprisons students in a restrictive cramming regimen.

Perhaps it's not so inconceivable that the next regeneration of The Teacher will be a robot. Would this open up a path for the next Doctor to be an Al being? And if so, would the robots like to form an orderly queue for auditions?