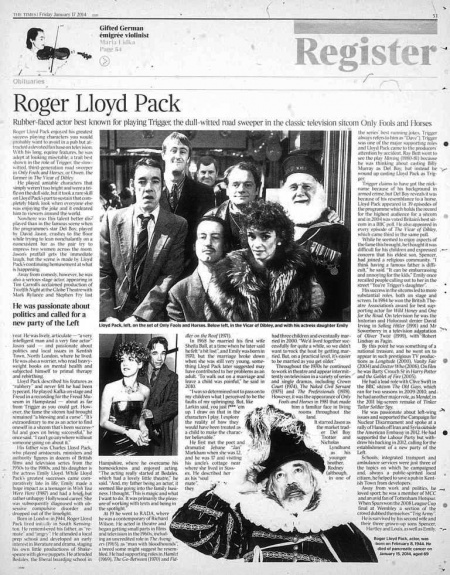 Rubber-faced actor best known for playing Trigger, the dull-witted road sweeper in the classic television sitcom Only Fools and Horses

Roger Lloyd Pack enjoyed his greatest success playing characters you would probably want to avoid in a pub but attracted a devoted fan base on television. With his long, equine features, he was adept at looking miserable; a trait best shown in the role of Trigger, the slowwitted, third-generation road sweeper in Only Fools and Horses, or Owen, the farmer in The Vicar of Dibley.

He played amiable characters that simply weren't too bright and were a trifle on the dull side, but it took a rare skill on Lloyd Pack's part to sustain that completely blank look when everyone else was enjoying the joke and it endeared him to viewers around the world.

Nowhere was this talent better displayed than in the famous scene when the programme's star Del Boy, played by David Jason, crashes to the floor while trying to lean nonchalantly on a nonexistent bar as the pair try to impress two women across the room. Jason's pratfall gets the immediate laugh, but the scene is made by Lloyd Pack's continuing bemusement at what is happening.

Away from comedy, however, he was also a serious stage actor, appearing in Tim Carroll's acclaimed production of Twelfth Night at the Globe Theatre with Mark Rylance and Stephen Fry last year. He was lively, articulate -- "a very intelligent man and a very fine actor" Jason said -- and passionate about politics and local issues in Kentish Town, North London, where he lived. He was also a worrier, who read heavyweight books on mental health and subjected himself to primal therapy and rebirthing.

Lloyd Pack described his features as "rubbery" and never felt he had been typecast. He played Kafka on stage and Freud in a recording for the Freud Museum in Hampstead -- about as far from Trigger as you could get. However, the fame the sitcom had brought remained "a blessing and a curse". "It's extraordinary to me as an actor to find oneself in a sitcom that's been successful and goes on being successful," he once said. "I can't go anywhere without someone going on about it."

His father was Charles Lloyd Pack, who played aristocrats, ministers and authority figures in dozens of British films and television series from the 1950s to the 1980s, and his daughter is the actress Emily Lloyd. While Lloyd Pack's greatest successes came comparatively late in life, Emily made a huge impact as a teenager in Wish You Were Here (1987) and had a brief, but rather unhappy Hollywood career. She was subsequently diagnosed with obsessive compulsive disorder and dropped out of the limelight.

He remembered his father, as "remote" and "angry". He attended a local prep school and developed an early interest in literature and drama, staging his own little productions of Shakespeare with glove puppets. He attended Bedales, the liberal boarding school in Hampshire, where he overcame his homesickness and enjoyed acting. "The acting really started at Bedales, which had a lovely little theatre," he said. "And, my father being an actor, it seemed like going into the family business.

I thought, 'This is magic and what I want to do'. It was primarily the pleasure of working with texts and being in the spotlight."

At 19 he went to RADA, where he was a contemporary of Richard Wilson. He acted in theatre and began getting small parts in films and television in the 1960s, including an uncredited role in The Avengers (1965), as "man with bloodhounds", a breed some might suggest he resembled. He had supporting roles in Hamlet (1969), The Go-Between (1970) and Fiddler on the Roof (1971).

In 1968 he married his first wife Sheila Ball, at a time when he later said he felt "a bit lost", and Emily was born in 1970, but the marriage broke down when she was still very young, something Lloyd Pack later suggested may have contributed to her problems as an adult. 'To walk out on a marriage and leave a child was painful," he said in 2010.

"I was so determined not to pass on to my children what I perceived to be the faults of my upbringing. But, like Larkin said, you just f*** 'em up. I draw on that in the characters I play. I explore the reality of how they would have been treated as a child to make the character believable."

He first met the poet and dramatist Jehane "Jan" Markham when she was 12, and he was 17 and visiting his uncle's cottage near where she lived in Sussex. He described her as his "soul mate", they had three children and eventually married in 2000. "We'd lived together successfully for quite a while, so we didn't want to rock the boat by getting married. But, on a practical level, it's easier to be married as you get older."

Throughout the 1970s he continued to work in theatre and appear intermittently on television in a variety of series and single dramas, including Crown Court (1974), The Naked Civil Servant (1975) and The Professionals (1978). However, it was the appearance of Only Fools and Horses in 1981 that made him a familiar face in living rooms throughout the land.

It starred Jason as the market trader Del Boy Trotter and Nicholas Lyndhurst as his younger brother, Rodney (although, in one of the series' best running jokes, Trigger always refers to him as "Dave"). Trigger was one of the major supporting roles and Lloyd Pack came to the producers' attention by accident. Ray Butt went to see the play Moving (1980-81) because he was thinking about casting Billy Murray as Del Boy, but instead he wound up casting Lloyd Pack as Trigger.

Trigger claims to have got the nickname because of his background in armed crime, but Del Boy reveals it was because of his resemblance to a horse. Lloyd Pack appeared in 39 episodes of the programme which holds the record for the highest audience for a sitcom and in 2004 was voted Britain's best sitcom in a BBC poll. He also appeared in every episode of The Vicar of Dibley, which came third in the same poll.

While he seemed to enjoy aspects of the fame this brought, he thought it was difficult for his children and expressed concern that his eldest son, Spencer, had joined a religious community. "I think having a famous father is difficult," he said. "It can be embarrassing and annoying for the kids." Emily once recalled people calling out to her in the street "You're Trigger's daughter".

His success in the sitcoms led to more substantial roles, both on stage and screen. In 1984 he won the British Theatre Association's award for best supporting actor for Wild Honey and One for the Road. On television he was the historian and Holocaust denier David Irving in Selling Hitler (1991) and Mr Sowerberry in a television adaptation of Oliver Twist (1999), with Robert Lindsay as Fagin.

By this point he was something of a national treasure, and he went on to appear in such prestigious TV productions as Longitude (2000), Vanity Fair (2004) and Doctor Who (2006). On film he was Barty Crouch Sr in Harry Potter and the Goblet of Fire (2005).

He had a lead role with Clive Swift in the BBC sitcom The Old Guys, which ran for two seasons in 2009-2010, and he had another major role, as Mendel, in the 2011 big-screen remake of Tinker Tailor Soldier Spy.

He was passionate about left-wing issues and supported the Campaign for Nuclear Disarmament and spoke at a rally of Hands off Iran and Syria outside the American Embassy in 2012. He had supported the Labour Party but withdrew his backing in 2012, calling for the establishment of a new party of the Left.

Schools, integrated transport and ambulance services were just three of the topics on which he campaigned and, always a public-spirited local citizen, he helped to save a pub in Kentish Town from developers.

Away from work and politics, he loved sport; he was a member of MCC and an avid fan of Tottenham Hotspur. When Spurs won the 2008 League Cup final at Wembley a section of the crowd dubbed themselves "Trig Army".

He is survived by his second wife and their three grown-up sons Spencer, Hartley and Louis, as well as Emily.

Caption: Lloyd Pack, left, on the set of Only Fools and Horses. Below left, in the Vicar of Dibley, and with his actress daughter Emily; BBC; BBC