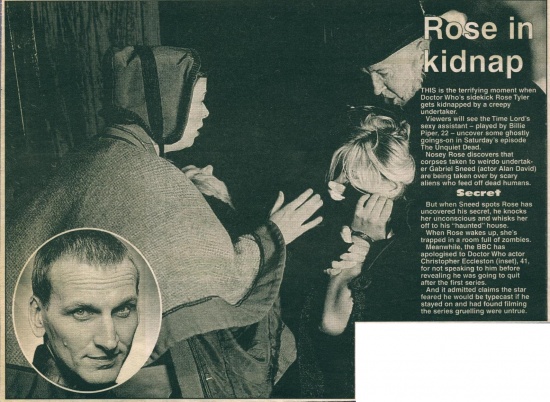 THIS is the terrifying moment when Doctor Who's sidekick Rose Tyler gets kidnapped by a creepy undertaker.

Nosey Rose discovers that corpses taken to weirdo undertaker Gabriel Sneed (actor Alan David) are being taken over by scary aliens who feed off dead humans.

But when Sneed spots Rose has uncovered his secret, he knocks her unconscious and whisks her off to his "haunted" house. When Rose wakes up, she's trapped in a room full of zombies. Meanwhile, the BBC has apologised to Doctor Who actor Christopher Eccleston (inset), 41. for not speaking to him before revealing he was going to quit after the first series.

And it admitted claims the star feared he would be typecast if he stayed on and had found filming the series gruelling were untrue.