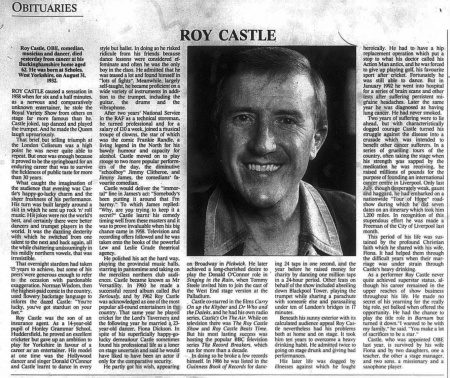 Roy Castle, OBE, comedian, musician and dancer, died yesterday from cancer at his Buckinghamshire home aged 62. He was born at Scholes, West Yorkshire, on August 31, 1932

ROY CASTLE caused a sensation in 1958 when for six and a half minutes, as a nervous and comparatively unknown entertainer, he stole the Royal Variety Show from others on stage far more famous than he. Castle joked, tap danced and played the trumpet. And he made the Queen laugh uproariously.

That brief but telling triumph at the London Coliseum was a high point he was never quite able to repeat. But once was enough because it proved to be the springboard for an enduring career that was to survive the fickleness of public taste for more than 30 years.

What caught the imagination of the audience that evening was Castle's happy-go-lucky charm and the sheer fresh-ness of his performance. His turn was built largely around a skit in which he sent up rock 'n' roll music. His jokes were not the world's best, and certainly there were better dancers and trumpet players in the world. It was the dazzling dexterity with which he switched from one talent to the next and back again, all the while chattering unassumingly in his mildly northern vowels, that was irresistible.

That overnight stardom had taken 15 years to achieve, but some of his peers were generous enough to refer to the occasion with pardonable exaggeration. Norman Wisdom, then the highest-paid comic in the country, used flowery backstage language to inform the dazed Castle: "You're lucky, you've got stardust on your feet."

Roy Castle was the son of an insurance agent. As a 14-year-old pupil of Honley Grammar School, Huddersfield, he proved an excellent cricketer but gave up an ambition to play for Yorkshire in favour of a career as an entertainer. His model at one time was the Hollywood dancer and singer Donald O'Connor and Castle learnt to dance in every style but ballet. In doing so he risked ridicule from his friends because dance lessons were considered effeminate and often he was the only boy in the class. He admitted that he was teased a lot and found himself in "lots of fights". Meanwhile, largely self-taught, he became proficient on a wide variety of instruments in addition to the trumpet, including the guitar, the drums and the vibraphone.

After two years' National Service in the RAF as a technical storeman, he turned professional and for a salary of Pounds 10 a week, joined a musical troupe of clowns, the star of which was the comic Frankie Randle, a living legend in the North for his bawdy humour and capacity for alcohol. Castle moved on to play stooge to two more popular per-formers of the day, the diminutive "schoolboy" Jimmy Clitheroe, and Jimmy James, the comedians' favourite comedian.

Castle would deliver the "immortal" line in James's act: "Somebody's been putting it around that I'm barmy." To which James replied: "Why, are you trying to keep it a secret?" Castle learnt his comedy timing well from these masters and it was to prove invaluable when his big chance came in 1958. Television and recording offers followed and he was taken onto the books of the powerful Lew and Leslie Grade theatrical agency.

He polished his act the hard way, playing the provincial music halls, starring in pantomime and taking on the merci-less northern club audiences. Castle became known as Mr Versatility. In 1960 he made a successful record album called But Seriously, and by 1962 Roy Castle was acknowledged as one of the most popular all-round entertainers in the country. That same year he played cricket for the Lord's Taverners and the following year he married a 23-year-old dancer, Fiona Dickson. In spite of his superficially happy-go-lucky demeanour Castle sometimes found his professional life as a loner on stage uncertain and said he would have liked to have been an actor if only for the comparative security.

He partly got his wish, appearing on Broadway in Pickwick. He later achieved a long-cherished desire to play the Donald O'Connor role in Singing in the Rain, when Tommy Steele invited him to join the cast of the West End stage version at the Palladium.

Castle co-starred in the films Carry On up the Khyber and Dr Who and the Daleks, and he had his own radio series, Castle's On The Air. While on television there was The Roy Castle Show and Roy Castle Beats Time. But his most lasting success was hosting the popular BBC television series The Record Breakers, which ran for more than a decade.

In doing so he broke a few records himself. In 1986 he was listed in the Guinness Book of Records for dancing 24 taps in one second, and the year before he raised money for charity by dancing one million taps in a 24-hour period. Other feats on behalf of the show included abseiling down Blackpool Tower, playing the trumpet while sharing a parachute with someone else and parasailing under ten of London's bridges in 17 minutes.

Beneath his sunny exterior with its calculated audience appeal Roy Castle nevertheless had his problems both at home and on stage. It took him ten years to overcome a heavy drinking habit. He admitted twice to going on stage drunk and giving bad performances.

His later life was dogged by illnesses against which he fought heroically. He had to have a hip replacement operation which put a stop to what his doctor called his Action Man antics, and he was forced to give up playing golf, his favourite sport after cricket. Fortunately he was still able to dance. But in January 1992 he went into hospital for a series of brain scans and other tests after suffering persistent migraine headaches. Later the same year he was diagnosed as having lung cancer. He had never smoked.

Two years of suffering were to lie ahead, but with characteristically dogged courage Castle turned his struggle against the disease into a crusade which was intended to benefit other cancer sufferers. In a series of gruelling tours of the country, often taking the stage when his strength was sapped by the medication he was receiving, he raised millions of pounds for the purpose of founding an international cancer centre in Liverpool. Only last July, though desperately weak, gaunt and haggard, he had embarked on a nationwide "Tour of Hope" roadshow during which he did seven dates on an itinerary which took him 1,200 miles. In recognition of this stupendous effort he was made a Freeman of the City of Liverpool last month.

This period of his life was sustained by the profound Christian faith which he shared with his wife, Fiona. It had helped them through the difficult years when their marriage was under strain through Castle's heavy drinking.

As a performer Roy Castle never quite achieved superstar status, although his career remained in the upper reaches of show business throughout his life. He made no secret of his yearning for the really big role, yet balked when offered the opportunity. He had the chance to play the title role in Barnum but turned it down. "I wanted to be with my family," he said. "You make a lot of sacrifices to be a star."

Castle, who was appointed OBE last year, is survived by his wife Fiona and by two daughters, one a teacher, the other a stage manager, and two sons, a missionary and a saxophone player.