Sandie wants to be a Dalek 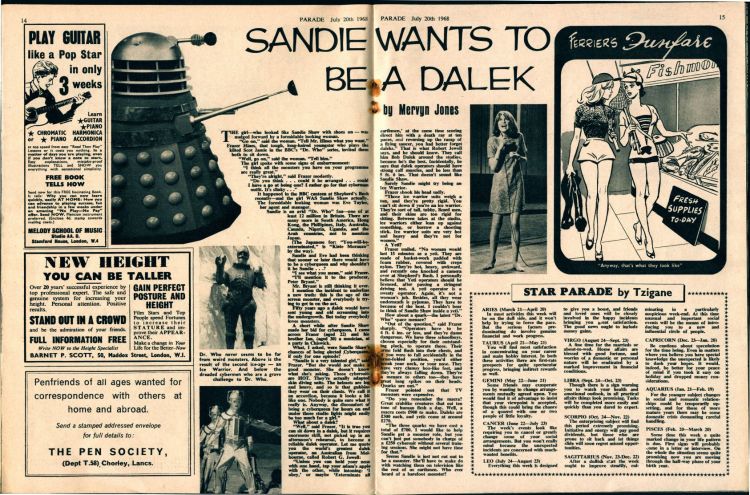 THE girl who looked like Sandie Shaw with shoes on - was nudged forward by a formidable looking woman.

"Go on," said the woman. "Tell Mr. Hines what you want." Frazer Hines, that tough, long-haired youngster who plays the kilted Scot Jamie in the BBC's "Dr. Who" series, invited them both to sit down.

The girl spoke with some signs of embarrassment:

"I think all the monsters you have on your programme are really great." "They're alright," said Frazer modestly.

It happened in the BBC canteen at Shepherd's Bush recently - and the girl WAS Sandie Shaw actually. The formidable looking woman was Eve Taylor, her agent and manager. Sandie is an avid "Dr. Who fan one of at least 12 million in Britain. There are many more in South America, Hong Kong. the Phillipines, Italy, Australia, Canada, Nigeria, Uganda, and the Arab countries, not to mention Japan.

(The Japanese for: "You will be exterminated," is "Kiete Morauzo" by the way).

Sandie and Eve had been thinking that sooner or later there would have to be a cyberqueen and why shouldn't it be Sandie...? "I see what you mean," said Frazer.

Mr. Bryant is still thinking it over.

I mention the incident to underline a new truth: this is the age of the screen monster, and everybody is trying to get in on the act.

Fifty years ago a dalek would have sent young and ok screaming into the undergrowth. But today everybody loves monsters.

A short while after Sandie Shaw made her bid for cyberqueen, I came across Frazer (aged 22) and his brother Ian, (aged 30) a musician, at a party in Chiswick.

What, I asked, were Sandie Shaw's chances of being elected Cyberqueen, if only for one episode?

"Sandie is a very talented girl," said Frazer. "But she would not make a good monster. She doesn't know what she's asking. Those cybersuits are HOT. They're actually adapted skin diving suits. The helmets are big and heavy, and so that gubbins they wear on their chests. We call it an accordion, because it looks a bit like one. Nobody is quite sure what it really is. Anyway, the discomfort of being a cyberqueen for hours on end under those studio lights might easily be too much for a girl.

What about a dalek?

"Well," said Frazer, "It is true you can sit down in a dalek, but it requires enormous skill, not picked up in an afternoon's rehearsal, to become a reliable dalek operator. Let me quote you the world's greatest dalek operator, an Australian from Melbourne, called Robert G. Jewell:

"Unless you can hold your nose with one hand, tap your adam's apple with the other, while intoning: 'I obey,' or maybe 'Exterminate all Earthmen,' at the same time scoring direct hits with death ray at ten paces, and reversing up the ramp of a flying saucer, you had better forget daleks. That is what Robert Jewell says, and he should know. They call him Bob Dalek around the studios, because he's the best. Incidentally, he says that dalek operators should have strong call muscles, and be less than 5 ft. 6 ins. That doesn't sound like Sandie Shaw.

"Those ice warrior suits weigh a ton, and they're pretty rigid. You can't sit down If you're an lee warrior. They're sort of tall, tubby. lurard men, and their skins are too rigid for sitting. Between takes at the studio, Ice Warriors either lean up against something. Or borrow a shooting stick. lee warrior suits are very hot and heavy and they're not for women."

Frazer smiled. "No woman would last 15 minutes as a yeti. They are made of basket-work padded with foam rubber, covered with crepe nylon. They're hot, heavy, awkward, and recently one knocked a camera over at Shepherd's Bush. I personally believe that Yeti operators should be licensed, after passing a stringent driving test. A yeti operator is a sweaty operator. Again, it's not a woman's job. Besides, all they wear underneath is pyjamas, They have to because of the heat. I couldn't bear to think of Sandie Shaw inside a yeti."

How about a quark the latest "Dr. Who" space menace?

"Out of the question," said Frazer sharply. "Operators have to be 4 ft. 6 ins, or less, and they're damn dangerous. We have three schoolboys, chosen especially for their outstanding pluck to operate those. Their arms fold flush into their chests, and if you were to fall accidentally in the arms-folded position, you'd either break your neck, or your nose. They have very clumsy box-like feet, and they're always falling down. They're a menace to others too they have great long spikes on their heads. Quarks are out."

Frazer pointed out that TV monsters were expensive.

"Do you remember the macra? Great crablike creatures that eat ten tons of human flesh a day. Well, a macra costs £900 to make. Daleks are £300 each, and yetis come at around £270.

"The three quarks we have cost a total of £700. I would like to help Sandie get a monster role, but you can't hit put somebody in charge of a £250 cybersuit without several training sessions. She might not have time for that."

Seems Sandie is just not cut out to be a monster. She'll have to make do with watching them on television like the rest of us earthmen. Who ever heard of a barefoot monster?

Caption: Dr. Who never seems to be far from weird monsters. Above is the result of the second ice-age - an Ice Warrior. And below are the dreaded Cybermen who are a grave challenge to Dr. Who