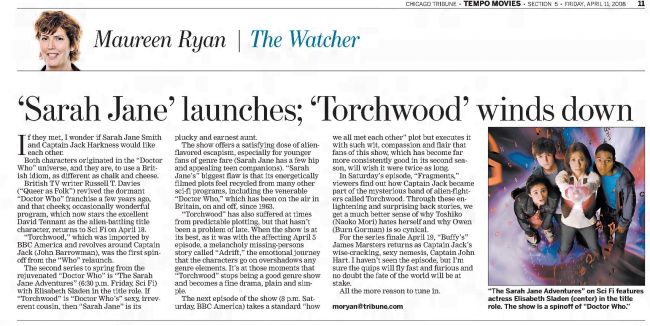 If they met, I wonder if Sarah Jane Smith and Captain Jack Harkness would like each other.

Both characters originated in the "Doctor Who" universe, and they are, to use a British idiom, as different as chalk and cheese.

British TV writer Russell T. Davies ("Queer as Folk") revived the dormant "Doctor Who" franchise a few years ago, and that cheeky, occasionally wonderful program, which now stars the excellent David Tennant as the alien-battling title character, returns to Sci Fi on April 18.

"Torchwood," which was imported by BBC America and revolves around Captain Jack (John Barrowman), was the first spinoff from the "Who" relaunch.

The second series to spring from the rejuvenated "Doctor Who" is "The Sarah Jane Adventures" (6:30 p.m. Friday, Sci Fi) with Elisabeth Sladen in the title role. If "Torchwood" is "Doctor Who's" sexy, irreverent cousin, then "Sarah Jane" is its plucky and earnest aunt.

The show offers a satisfying dose of alien-flavored escapism, especially for younger fans of genre fare (Sarah Jane has a few hip and appealing teen companions). "Sarah Jane's" biggest flaw is that its energetically filmed plots feel recycled from many other sci-fi programs, including the venerable "Doctor Who," which has been on the air in Britain, on and off, since 1963.

"Torchwood" has also suffered at times from predictable plotting, but that hasn't been a problem of late. When the show is at its best, as it was with the affecting April 5 episode, a melancholy missing-persons story called "Adrift," the emotional journey that the characters go on overshadows any genre elements. It's at those moments that "Torchwood" stops being a good genre show and becomes a fine drama, plain and simple.

The next episode of the show (8 p.m. Saturday, BBC America) takes a standard "how we all met each other" plot but executes it with such wit, compassion and flair that fans of this show, which has become far more consistently good in its second season, will wish it were twice as long.

In Saturday's episode, "Fragments," viewers find out how Captain Jack became part of the mysterious band of alien-fighters called Torchwood. Through these enlightening and surprising back stories, we get a much better sense of why Toshiko (Naoko Mori) hates herself and why Owen (Burn Gorman) is so cynical.

For the series finale April 19, "Buffy's" James Marsters returns as Captain Jack's wise-cracking, sexy nemesis, Captain John Hart. I haven't seen the episode, but I'm sure the quips will fly fast and furious and no doubt the fate of the world will be at stake.

All the more reason to tune in.

Caption: Photo (color): "The Sarah Jane Adventures" on Sci Fi features actress Elisabeth Sladen (center) in the title role. The show is a spinoff of "Doctor Who."