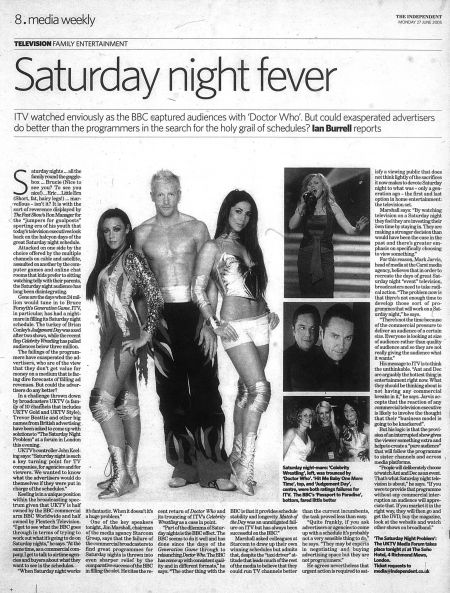 ITV watched enviously as the BBC captured audiences with 'Doctor Who'. But could exasperated advertisers do better than the programmers in the search for the holy grail of schedules? Ian Burrell reports

Saturday nights ... all the family round the goggle-box ... Brucie (Nice to see you? To see you nice!) ... Eric ...Little Ern (Short, fat, hairy legs!) ... marvellous - isn't it? It is with the sort of reverence displayed by The Fast Show's Ron Manager for the "jumpers for goalposts" sporting era of his youth that today's television executives look back on the halcyon days of the great Saturday night schedule.

Attacked on one side by the choice offered by the multiple channels on cable and satellite, assaulted on another by the computer games and online chat rooms that kids prefer to sitting watching telly with their parents, the Saturday night audience has long been disintegrating.

Gone are the days when 24 million would tune in to Bruce Forsyth's Generation Game. ITV, in particular, has had a nightmare in filling its Saturday night schedule. The turkey of Brian Conley's Judgement Day was axed after two shows, while the recent flop Celebrity Wrestling pulled audiences below three million. The failings of the programmers have exasperated the advertisers, who are of the view that they don't get value for money on a medium that is facing dire forecasts of falling ad revenues. But could the advertisers do any better?

In a challenge thrown down by broadcasters UKTV (a family of 10 channels that includes UKTV Gold and UKTV Style), Trevor Beattie and other big names from British advertising have been asked to come up with solutions to "The Saturday Night Problem" at a forum in London this evening.

UKTV's controller John Keeling says: "Saturday night is such a key turning point for TV companies, for agencies and for viewers. We wanted to know what the advertisers would do themselves if they were put in charge of the schedules."

Keeling is in a unique position within the broadcasting spectrum given that UKTV is half owned by the BBC commercial arm BBC Worldwide and half owned by Flextech Television. "I get to see what the BBC goes through in terms of trying to work out what it's going to do on Saturday nights," he says. "At the same time, as a commercial company, I get to talk to airtime agencies and buyers about what they want to see in the schedule.

"When Saturday night works it's fantastic. When it doesn't it's a huge problem."

One of the key speakers tonight, Jim Marshall, chairman of the media agency Starcom Group, says that the failure of the commercial broadcasters to find great programmes for Saturday nights is thrown into even sharper relief by the comparative success of the BBC in filling the slot. He cites the recent return of Doctor Who and its trouncing of ITV's Celebrity Wrestling as a case in point.

"Part of the dilemma of Saturday nights is the BBC effect. The BBC seems to do it well and has done since the days of the Generation Game through to relaunching Doctor Who. The BBC has come up with consistent quality and in different formats," he says. "The other thing with the BBC is that it provides schedule stability and longevity. Match of the Day was an unmitigated failure on ITV but has always been successful on the BBC."

Marshall asked colleagues at Starcom to draw up their own winning schedules but admits that, despite the "taxi driver" attitude that leads much of the rest of the media to believe that they could run TV channels better than the current incumbents, the task proved less than easy

"Quite frankly, if you ask advertisers or agencies to come up with a schedule it's probably not a very sensible thing to do," he says. "They may be experts in negotiating and buying advertising space but they are not programmers."

He agrees nevertheless that urgent action is required to satisfy a viewing public that does not think lightly of the sacrifices it now makes to devote Saturday night to what was - only a generation ago - the first and last option in home entertainment: the television set.

Marshall says: "By watching television on a Saturday night they feel they are investing their Own time by staying in. They are making a stronger decision than would have been the case in the past and there's greater emphasis on specifically choosing to view something."

For this reason, Mark Jarvis, head of media at the Carat media agency, believes that in order to recreate the days of great Saturday night "event" television, broadcasters need to take radical action. "The problem now is that there's not enough time to develop those sort of programmes that will work on a Saturday night," he says.

"There's not the time because of the commercial pressure to deliver an audience of a certain size. Everyone is looking at size of audience rather than quality of audience and so they are not really giving the audience what it wants."

His message to ITV is to think the unthinkable. "Ant and Dec are arguably the hottest thing in entertainment right now What they should be thinking about is not having any commercial breaks in it," he says. Jarvis accepts that the reaction of any commercial television executive is likely to involve the thought that their "business model is going to be knackered".

But his logic is that the provision of an interrupted show gives the viewer something extra and helps to create a "pure audience" that will follow the programme to sister channels and across media platforms.

"People will deliberately choose to watch Ant and Dec as an event. That's what Saturday night television is about," he says. "If you were to provide that programme without any commercial interruption an audience will appreciate that. If you market it in the right way, they will then go and get the DVD, buy the magazine, look at the website and watch other shows on broadband."