Scarcely human megalomaniacs ... it's hard not to see this as an allegory 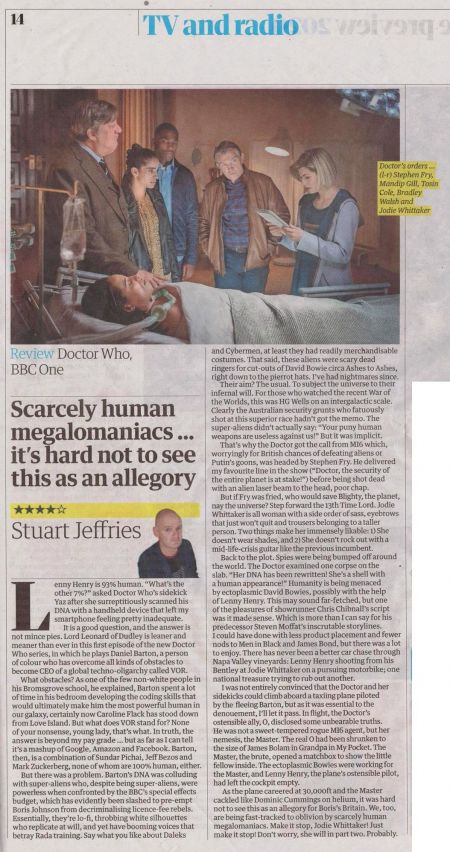 Lenny Henry is 93% human. "What's the other 7%?" asked Doctor Who's sidekick Yaz after she surreptitiously scanned his DNA with a handheld device that left my smartphone feeling pretty inadequate.

It is a good question, and the answer is not mince pies. Lord Leonard of Dudley is leaner and meaner than ever in this first episode of the new Doctor Who series, in which he plays Daniel Barton, a person of colour who has overcome all kinds of obstacles to become CEO of a global techno-oligarchy called VOR.

What obstacles? As one of the few non-white people in his Bromsgrove school, he explained, Barton spent a lot of time in his bedroom developing the coding skills that would ultimately make him the most powerful human in our galaxy, certainly now Caroline Flack has stood down from Love Island. But what does VOR stand for? None of your nonsense, young lady, that's what. In truth, the answer is beyond my pay grade ... but as far as I can tell it's a mashup of Google, Amazon and Facebook. Barton, then, is a combination of Sundar Pichai, Jeff Bezos and Mark Zuckerberg, none of whom are 100% human, either.

But there was a problem. Barton's DNA was colluding with super-aliens who, despite being super-aliens, were powerless when confronted by the BBC's special effects budget, which has evidently been slashed to pre-empt Boris Johnson from decriminalising licence-fee rebels. Essentially, they're lo-fi, throbbing white silhouettes who replicate at will, and yet have booming voices that betray Rada training. Say what you like about Daleks and Cybermen, at least they had readily merchandisable costumes. That said, these aliens were scary dead ringers for cut-outs of David Bowie circa Ashes to Ashes, right down to the pierrot hats. I've had nightmares since.

Their aim? The usual. To subject the universe to their infernal will. For those who watched the recent War of the Worlds, this was HG Wells on an intergalactic scale. Clearly the Australian security grunts who fatuously shot at this superior race hadn't got the memo. The super-aliens didn't actually say: "Your puny human weapons are useless against us!" But it was implicit.

That's why the Doctor got the call from MI6 which, worryingly for British chances of defeating aliens or Putin's goons, was headed by Stephen Fry. He delivered my favourite line in the show ("Doctor, the security of the entire planet is at stake!") before being shot dead with an alien laser beam to the head, poor chap.

But if Fry was fried, who would save Blighty, the planet, nay the universe? Step forward the 13th Time Lord. Jodie Whittaker is all woman with a side order of sass, eyebrows that just won't quit and trousers belonging to a taller person. Two things make her immensely likable: 1) She doesn't wear shades, and 2) She doesn't rock out with a mid-life-crisis guitar like the previous incumbent.

Back to the plot. Spies were being bumped off around the world. The Doctor examined one corpse on the slab. "Her DNA has been rewritten! She's a shell with a human appearance!" Humanity is being menaced by ectoplasmic David Bowies, possibly with the help of Lenny Henry. This may sound far-fetched, but one of the pleasures of showrunner Chris Chibnall's script was it made sense. Which is more than I can say for his predecessor Steven Moffat's inscrutable storylines. I could have done with less product placement and fewer nods to Men in Black and James Bond, but there was a lot to enjoy. There has never been a better car chase through Napa Valley vineyards: Lenny Henry shooting from his Bentley at Jodie Whittaker on a pursuing motorbike; one national treasure trying to rub out another.

I was not entirely convinced that the Doctor and her sidekicks could climb aboard a taxiing plane piloted by the fleeing Barton, but as it was essential to the denouement, I'll let it pass. In flight, the Doctor's ostensible ally, O, disclosed some unbearable truths. He was not a sweet-tempered rogue MI6 agent, but her nemesis, the Master. The real O had been shrunken to the size of James Bolam in Grandpa in My Pocket. The Master, the brute, opened a matchbox to show the little fellow inside. The ectoplasmic Bowies were working for the Master, and Lenny Henry, the plane's ostensible pilot, had left the cockpit empty.

As the plane careered at 30,000ft and the Master cackled like Dominic Cummings on helium, it was hard not to see this as an allegory for Boris's Britain. We, too, are being fast-tracked to oblivion by scarcely human megalomaniacs. Make it stop, Jodie Whittaker! Just make it stop! Don't worry, she will in part two. Probably.