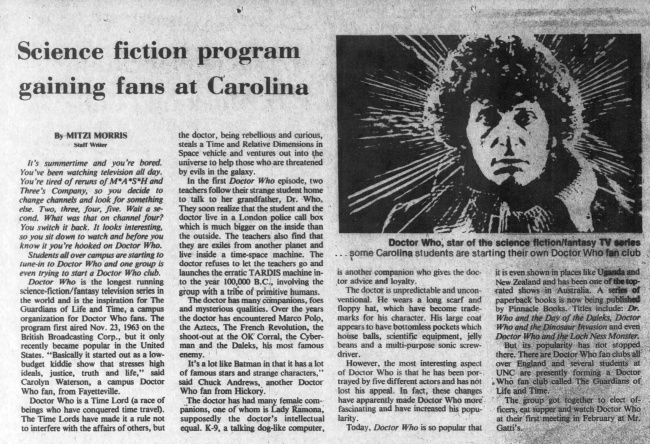 It's summertime and you're bored. You've been watching television all day. You're tired of reruns of M*A*S*H and Three's Company, so you decide to change channels and look for something else. Two, three, four, five. Wait a second. What was that on channel four? You switch it back. It looks interesting, so you sit down to watch and before you know it you're hooked on Doctor Who.

Students all over campus are starting to tune-in to Doctor Who and one group is even trying to start a Doctor Who club.

Doctor Who is the longest running science-fiction/fantasy television series in the world and is the inspiration for The Guardians of Life and Time, a campus organization for Doctor Who fans. The program first aired Nov. 23, 1963 on the British Broadcasting Corp., but it only recently became popular in the United States. "Basically it started out as a low-budget kiddie show that stresses high ideals, justice, truth and life," said Carolyn Waterson, a campus Doctor Who fan, from Fayetteville.

Doctor Who is a Time Lord (a race of beings who have conquered time travel). The Time Lords have made it a rule not to interfere with the affairs of others, but the doctor, being rebellious and curious, steals a Time and Relative Dimensions in Space vehicle and ventures out into the universe to help those who are threatened by evils in the galaxy.

In the first Doctor Who episode, two teachers follow their strange student home to talk to her grandfather, Dr. Who. They soon realize that the student and the doctor live in a London police call box which is much bigger on the inside than the outside. The teachers also find that they are exiles from another planet and live inside a time-space machine. The doctor refuses to let the teachers go and launches the erratic TARDIS machine into the year 100,000 B.C., involving the group with a tribe of primitive humans.

The doctor has many companions, foes and mysterious qualities. Over the years the doctor has encountered Marco Polo, the Aztecs, The French Revolution, the shoot-out at the OK Corral, the Cyber-man and the Daleks, his most famous enemy.

It's a lot like Batman in that it has a lot of famous stars and strange characters," said Chuck Andrews,. another Doctor' Who fan from Hickory.

The doctor has had many female companions, one of whom is Lady Ramona, supposedly the doctor's intellectual equal. K-9, a talking dog-like computer, is another companion who gives the doctor advice and loyalty.

The doctor is unpredictable and unconventional. He wears a long scarf and floppy hat, which have become trademarks for his character. His large coat appears to have bottomless pockets which house balls, scientific equipment, jelly beans and a multi-purpose sonic screwdriver.

However, the most interesting aspect of Doctor Who is that he has been portrayed by five different actors and has not lost his appeal. In fact, these changes have apparently made Doctor Who more fascinating and have increased his popularity.

Today, Doctor Who is so popular that it is even shown in places like Uganda and New Zealand and has been one of the top-rated shows in Australia. A series of paperback books is now being published by Pinnacle Books. Titles include: Dr. Who and the Day of the Daleks, Doctor Who and the Dinosaur Invasion and even Doctor Who and the Loch Ness Monster.

The group got together to elect officers, eat supper and watch Doctor Who at their first meeting in February at Mr. Gatti's.

Caption: Doctor Who, star of the science fiction/fantasy TV series ... some Carolina students are starting their own Doctor Who fan club