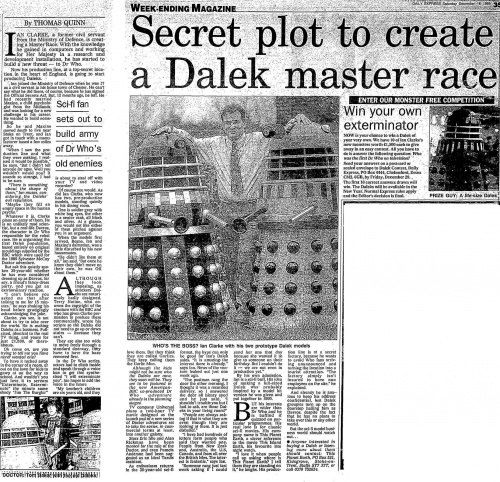 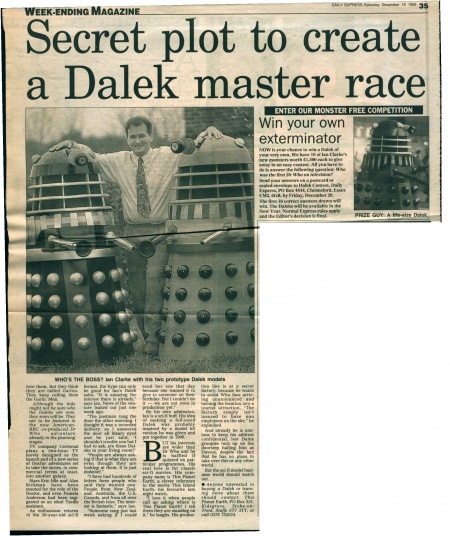 IAN CLARKE, a former: civil servant from the Ministry Of Defence, is creating a Master Race. With the knowledge he gained in computers and working for Her Majesty in a research and development installation, he has started to build a new threat to Dr Who.

Now his production line, at a top-secret location in the heart of England, is going to start producing Daleks.

Ian joined the Ministry of Defence when he was 17 as a civil servant in his home town of Chester. He can't say what he did there, of course, because he has signed the Official Secrets Act. But, 12 months ago, he left. He had recently married Maxine, a child psychologist from the Midlands, and was looking for a new challenge in his career. He wanted to build something.

So he and Maxine moved south to live near Stoke on Trent, and Ian got in touch with a manufacturer based a few miles away.

"When I saw the production line and what they were making, I realised it would be possible," he says. "But I didn't tell anyone for ages. Well you wouldn't would you? It sounds so strange, I had to be sure.

"There is something about the shape of them," Ian muses, considering the Daleks' evil reputation.

"Maybe they fill an empty space in the human psyche."

Whatever it is, Clarke plans an army of them. He is an unlikely mad scientist, but a real-life Davros, the character in Dr Who responsible for the robot race. He is organising. the first Dalek population, based entirely on original mouldings supplied by the BBC which were used for the 1989 Sylvester McCoy Doctor adventure.

But ask this quietly spoken 35-year-old whether he has even considered dressing up as Davros, for say, a friend's fancy-dress party, and you get an extraordinary reaction.

"I can't believe you asked me that after talking to me for 15 minutes," he says shaking his head before grudgingly acknowledging the joke.

Clarke, you see, is not about to try to take over the world. He is making Daleks as a business. Full-sized, identical to the real TV thing, and yours for just £1,500, or thereabouts.

Oh come on, are you trying to tell me you have never wanted one?

To have it tucked away in the corner of a room, or out on the lawn for kids to gawp at on the way to school. And wouldn't you just love it to scream "Exterminate, Exterminate" the minute some shady "Jim The Burglar" is about to 'steal off with your TV and video recorder?

Of course you would. As did Ian Clarke, who now has two, pre-production models, standing quietly in his dining room.

One is soldier grey with white bug eyes, the other is a senior rank, all black and silver. At a glance, you would not like either of them pitched against you in an argument.

When the models first arrived, Beano, Ian and Maxine's dalmatian, was a little disturbed by his new housemates.

"He didn't like them at all," Ian said. "But once he knew they didn't move on their own, he was OK about them."

ALTHOUGH they look imposing, as attackers Daleks are notoriously badly designed. Terry Nation, who co-owns the copyright of the creature with the BBC and who has given Clarke permission to produce them commercially, wrote his scripts so the Daleks did not need to go up or down stairs — because they can't.

They are also too wide to move freely through a standard doorway, they have to have the base removed first.

In the Dr Who series. actors had to climb inside and speak through a voice box to get that synthesised "I will exterminate you". Ian hopes to add the voice in the future

"My brother's children are six years old, and they love them. But they think they are called Garlics. They keep calling them the Garlic Men.

Although the kids might not be sure who the Daleks are now, they soon will be. They are to be featured in the new American-BBC co-produced Dr Who adventure already in the planning stages.

TV company Universal plans a two-hour TV movie designed as the launch pad of a new series of Doctor adventures set to take the series, In commercial terms at least. Into another galaxy.

Stars Eric Idle and Alan Rickman have been mooted for the role of the Doctor, and even Pamela Anderson had been suggested us an ideal Tardis assistant.

As enthusiasm returns in the 30-year-old sci-fi format, the hype can only be good for Ian's Dalek sales. "It is amazing. the interest there is already." says Ian. News of the venture leaked out just one week ago.

"The postman rang the door the other morning, I thought it was a recorded delivery, so I answered the door all bleary eyed and he just said, 'I shouldn't trouble you but I had to ask, are those Dal-eks in your living room?'

"People are always asking if that is what they are even though they are looking at them. It is just disbelief."

"I have had hundreds of letters form people who said they wanted one. People from New Zealand, Australia, the U.S, Canada, and from all over the British Isles. The interest is fantastic," says Ian.

"Someone rang just last week asking if I could send her one that day Because she wanted it to give to someone on their birthday. But I couldn't do it — we are not even in production yet."

By his own admission. Ian is a sci-fi buff. His idea of making a full-sized Dalek was probably inspired by a model kit version he was given and pin together in 1990.

BUT his interests are wider than Dr Who and he is baffled if quizzed on particular programmes. His real love Is for classic sci-fi movies. His company name is This Planet Earth, a clever reference to the movie This Island Earth, Ills favourite late night watch,

"I love it when people call up asking where is This Planet Earth? I tell them they are standing on it." he laughs, His production line is at a secret factory, because he wants to avoid Who fans arriving unannounced and turning the location into a tourist attraction. "The factory simply isn't insured to have non employees on the site," he explained.

And already he is anxious to keep his address confidential, lest Dalek groupies turn up on the doorstep hailing him as Davros, despite the fact that he has no plans to take over this or any other world.

But the sci-fi model business world should watch out...

Anyone Interested in buying a Dalek or learning more about them should contact: This Planet Earth, PO Box 521, Kidsgrove, Stoke-on-Trent, Staffs ST7 37T, or call 0378 752624.

Caption: WHO'S THE BOSS? Ian Clarke with his two prototype Dalek models

NOW is your chance to win Dalek of your very own. We have 10 of Ian Clarke's new monsters worth £1,500 each to give away in an easy contest. All you have to do Is answer the following question: Who was the first Dr Who on television?

The first 10 correct answers drawn will win. The Daleks will be available in the New Year. Normal Express rules apply and the Editor's decision is final.