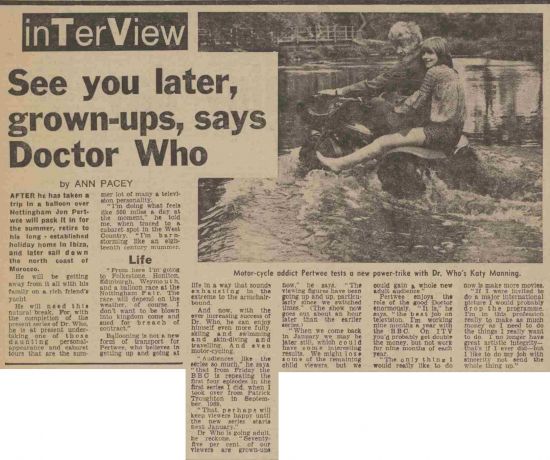 AFTER he has taken trip in a balloon over Nottingham Jon Pertwee will pack it in for the summer, retire to his long established holiday home In Ibiza, and later sail down the north coast of Morocco.

He will need this natural break. For, with the completion of the present series of Dr. Who, he is at present undertaking one of those daunting personal-appearance and cabaret tours that are the summer lot of many a television personality.

I'm doing what feels like 500 miles a day at the moment." he told me. when traced to a Cabaret spot in the West Country. "I'm barn-storming like an eighteenth century mummer.

"From here I'm going to Folkestone, Honiton, Edinburgh, Weymouth, and a balloon race at the Nottingham Fair. The race will depend on the weather, of course. I don't want to be blown into kingdom come and ailed for breach of contract."

Ballooning is not a new form of transport for Pertwee, who believes in getting up and going at life in a way that sounds exhausting In the extreme to the armchair-hound.

And now, with the ever increasing success of Dr. Who, he can enjoy himself even more fully. skiing and swimming and akin-diving and travelling. And even motor-cycling.

"Audiences like the series so much," he says "that from Friday the BBC is repeating the first four episodes in the first series I did, when I took over from Patrick Troughton In September, 1969.

"That perhaps will keep viewers happy until the new series starts neat January."

Dr Who is going adult, he reckons. "Seventy-five per cent of our viewers are grown-ups now." he says. "The viewing figures have been going up and up, particularly since we switched times." (The show now goes out about an hour later than the earlier series)

"When we come back in January we may be later still, which could have some interesting results. We might lose some of the remaining child viewers, but we could gain a whole new adult audience.

Pertwee enjoys the role of the good Doctor enormously. "It is," he says, "the best job on television. I'm working nine months a year with the BBC. On ITV you'd probably get double the money, but not work for nine months of each year.

"The only thing I would really like to do now is make more movies. "If I were invited to do a major international picture I would probably drop the programme. In this profession really to make as much money as I need to do the things I really want to do. I no longer have &Teat artistic integrity—that's if I ever did—but 1 like to do my job with sincerity not send the whole thing up."