Seven channels in the Seventies 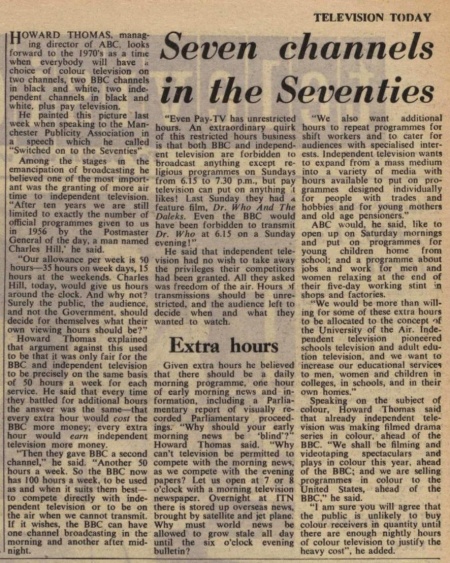 Among the stages in the emancipation of broadcasting he believed one of the most important was the granting of more air time to independent television. "After ten years we are still limited to exactly the number of official programmes given to us in 1956 by the Postmaster General of the day, a man named Charles Hill,' he said.

"Our allowance per week is 50 hours-35 hours on week days, 15 hours at the weekends. Charles Hill, today, would give us hours around the clock. And why not? Surely the public, the audience. and not the Government. should decide for themselves what their own viewing hours should be?"

Howard Thomas explained that argument against this used to be that it was only fair for the BBC and independent television to be precisely on the same basis of 50 hours a week for each service. He said that every time they battled for additional hours the answer was the same—that every extra hour would cost the BBC more money; every extra hour would earn independent television more money.

"Then they gave BBC a second channel," he said. "Another 50 hours a week. So the BBC now has 100 hours a week, to be used as and when it suits them best—to compete directly with independent television or to be on the air when we cannot transmit. If it wishes, the BBC can have one channel broadcasting in the morning and another after midnight.

"Even Pay-TV has unrestricted hours. An extraordinary quirk of this restricted hours business is that both BBC and independent television arc forbidden to broadcast anything except religious programmes on Sundays from 6.15 to 7.30 p.m., but pay television can put on anything t likes! Last Sunday they had 4 feature film. Dr. Who And The Daleks. Even the BBC would have been forbidden to transmit Dr. Who at 6.15 on a Sunday evening!"

He said that independent television had no wish to take away the privileges their competitors had been granted. All they asked was freedom of the air. Hours 4 transmissions should be unrestricted, and the audience left to decide when and what they wanted to watch.

Given extra hours he believed that there should be a daily morning programme, one hour of early morning news and information, including a Parliamentary report of visually recorded Parliamentary proceedings. "Why should your early morning news be 'blind'?" Howard Thomas said. "Why can't television be permitted to compete with the morning news, as we compete with the evening papers? Let us open at 7 or 8 o'clock with a morning television newspaper. Overnight at ITN there is stored up overseas news, brought by satellite and jet plane. Why must world news be allowed to grow stale all day until the six o'clock evening bulletin?

"We also want additional hours to repeat programmes for shift workers and to cater for audiences with specialised interests. Independent television wants to expand from a mass medium into a variety of media with hours available to put on programmes designed individually for people with trades and hobbies and for young mothers and old age pensioners."

ABC would, he said, like to open up on Saturday mornings and put on programmes for young children home from school; and a programme about jobs and work for men and women relaxing at the end of their five-day working stint in shops and factories.

"We would be more than willing for some of these extra hours to be allocated to the concept of the University of the Air. Independent television pioneered schools television and adult edution television, and we want to increase our educational services to men, women and children in colleges, in schools, and in their own homes."

"I am sure you will agree that the public is unlikely to buy colour receivers in quantity until there are enough nightly hours of colour television to justify the heavy cost", he added.