Sexing up the Tardis 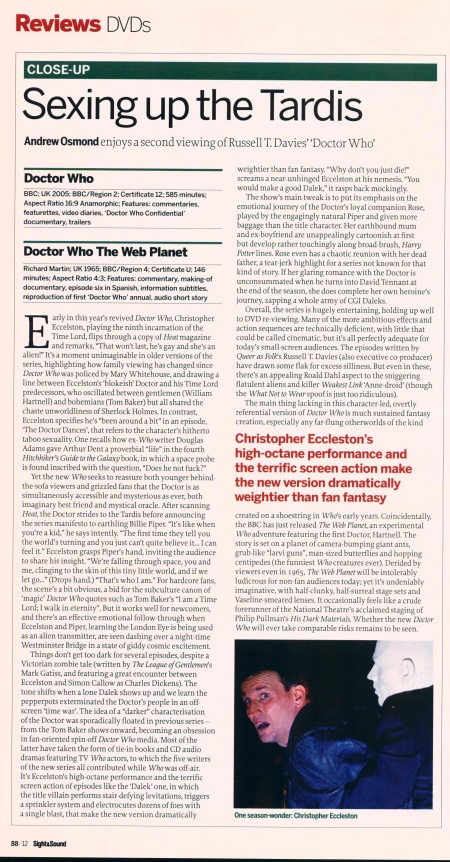 Doctor Who The Web Planet

Early in this year's revived Doctor Who, Christopher Eccelston, playing the ninth incarnation of the Time Lord, flips through a copy of Heat magazine and remarks, "That won't last, he's gay and she's an alien!" It's a moment unimaginable in older versions of the series, highlighting how family viewing has changed since Doctor Who was policed by Mary Whitehouse, and drawing a line between Eccelston's blokeish Doctor and his Time Lord predecessors, who oscillated between gentlemen (William Hartnell) and bohemians (Tom Baker) but all shared the chaste unworldliness of Sherlock Holmes. In contrast, Eccelston specifies he's "been around a bit" in an episode, 'The Doctor Dances', that refers to the character's hitherto taboo sexuality. One recalls how ex-Who writer Douglas Adams gave Arthur Dent a proverbial "life" in the fourth Hitchhiker's Guide to the Galaxy book, in which a space probe is found inscribed with the question, "Does he not fuck?"

Yet the new Who seeks to reassure both younger behind-the-sofa viewers and grizzled fans that the Doctor is as simultaneously accessible and mysterious as ever, both imaginary best friend and mystical oracle. After scanning Heat, the Doctor strides to the Tardis before announcing the series manifesto to earthling Billie Piper. "It's like when you're a kid," he says intently. "The first time they tell you the world's turning and you just can't quite believe it... I can feel it." Eccelston grasps Piper's hand, inviting the audience to share his insight. "We're falling through space, you and me, clinging to the skin of this tiny little world, and if we let go..." (Drops hand.) "That's who I am." For hardcore fans, the scene's a bit obvious, a bid for the subculture canon of 'magic' Doctor Who quotes such as Tom Baker's "I am a Time Lord; I walk in eternity". But it works well for newcomers, and there's an effective emotional follow-through when Eccelston and Piper, learning the London Eye is being used as an alien transmitter, are seen dashing over a night-time Westminster Bridge in a state of giddy cosmic excitement.

Things don't get too dark for several episodes, despite a Victorian zombie tale (written by The League of Gentlemen's Mark Gatiss, and featuring a great encounter between Eccelston and Simon Callow as Charles Dickens). The tone shifts when a lone Dalek shows up and we learn the pepperpots exterminated the Doctor's people in an off-screen 'time war'. The idea of a "darker" characterisation of the Doctor was sporadically floated in previous series — from the Tom Baker shows onward, becoming an obsession in fan-oriented spin-off Doctor Who media. Most of the latter have taken the form of tie-in books and CD audio dramas featuring TV Who actors, to which the five writers of the new series all contributed while Who was off-air. It's Eccelston's high-octane performance and the terrific screen action of episodes like the 'Dalek' one, in which the title villain performs stair-defying levitations, triggers a sprinkler system and electrocutes dozens of foes with a single blast, that make the new version dramatically weightier than fan fantasy. "Why don't you just die!" screams a near-unhinged Eccelston at his nemesis. "You would make a good Dalek," it rasps back mockingly.

The show's main tweak is to put its emphasis on the emotional journey of the Doctor's loyal companion Rose, played by the engagingly natural Piper and given more baggage than the title character. Her earthbound mum and ex-boyfriend are unappealingly cartoonish at first but develop rather touchingly along broad-brush, Harry Potter lines. Rose even has a chaotic reunion with her dead father, a tear-jerk highlight for a series not known for that kind of story. If her glaring romance with the Doctor is unconsummated when he turns into David Tennant at the end of the season, she does complete her own heroine's journey, zapping a whole army of CGI Daleks.

Overall, the series is hugely entertaining, holding up well to DVD re-viewing. Many of the more ambitious effects and action sequences are technically deficient, with little that could be called cinematic, but it's all perfectly adequate for today's small-screen audiences. The episodes written by Queer as Folk's Russell T. Davies (also executive co-producer) have drawn some flak for excess silliness. But even in these, there's an appealing Roald Dahl aspect to the sniggering flatulent aliens and killer Weakest Link 'Anne-droid' (though the What Not to Wear spoof is just too ridiculous).

The main thing lacking in this character-led, overtly referential version of Doctor Who is much sustained fantasy creation, especially any far-flung otherworlds of the kind created on a shoestring in Who's early years. Coincidentally, the BBC has just released The Web Planet, an experimental Who adventure featuring the first Doctor, Hartnell. The story is set on a planet of camera-bumping giant ants, grub-like "larvi guns", man-sized butterflies and hopping centipedes (the funniest Who creatures ever). Derided by viewers even in 1965, The Web Planet will be intolerably ludicrous for non-fan audiences today; yet it's undeniably imaginative, with half-clunky, half-surreal stage sets and Vaseline-smeared lenses. It occasionally feels like a crude forerunner of the National Theatre's acclaimed staging of Philip Pullman's His Dark Materials. Whether the new Doctor Who will ever take comparable risks remains to be seen.