She wears the trousers 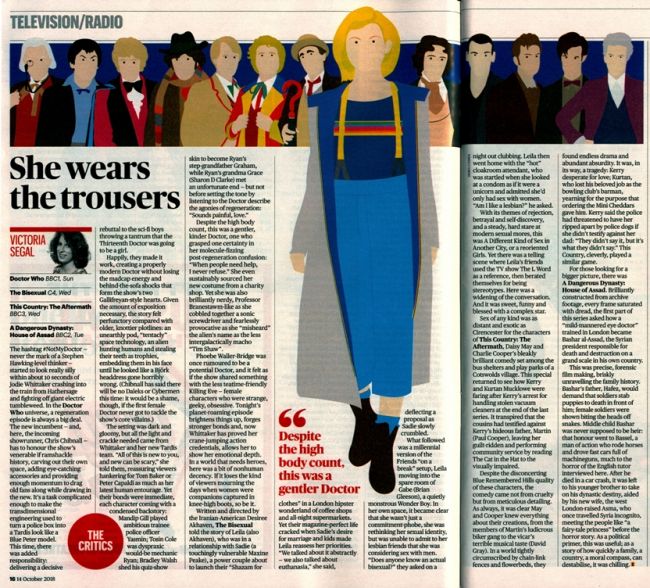 The hashtag #NotMyDoctor — never the mark of a Stephen Hawking-level thinker — started to look really silly within about to seconds of Jodie Whittaker crashing into the train from Hathersage and fighting off giant electric tumbleweed. In the Doctor Who universe, a regeneration episode is always a big deal. The new incumbent — and, here, the incoming showrunner, Chris Chibnall —has to honour the show's venerable if ramshackle history, carving out their own space, adding eye-catching accessories and providing enough momentum to drag old fans along while drawing in the new. It's a task complicated enough to make the transdimensional engineering used to turn a police box into a Tardis look like a Blue Peter model. This time, there was added responsibility: delivering a decisive rebuttal to the sci-fi boys throwing a tantrum that the Thirteenth Doctor was going to be a girl.

Happily, they made it work, creating a properly modern Doctor without losing the madcap energy and behind-the-sofa shocks that form the show's two Gallifreyan-style hearts. Given the amount of exposition necessary, the story felt perfunctory compared with older, knottier plotlines: an unearthly pod, "tentacly" space technology, an alien hunting humans and stealing their teeth as trophies, embedding them in his face until he looked like a Bjork headdress gone horribly wrong. (Chibnall has said there will be no Daleks or Cybermen this time: it would be a shame, though, if the first female Doctor never got to tackle the show's core villains.)

The setting was dark and gloomy, but all the light and crackle needed came from Whittaker and her new Tardis team. "All of this is new to you, and new can be scary," she told them, reassuring viewers hankering for Tom Baker or Peter Capaldi as much as her latest human entourage. Yet their bonds were immediate, each character coming with a condensed backstory: Mandip Gill played ambitious trainee police officer Yasmin; Tosin Cole was dyspraxic would-be mechanic Ryan; Bradley Walsh shed his quiz-show skin to become Ryan's step-grandfather Graham, while Ryan's grandma Grace (Sharon D Clarke) met an unfortunate end — but not before setting the tone by listening to the Doctor describe the agonies of regeneration: "Sounds painful, love."

Despite the high body count, this was a gentler, kinder Doctor, one who grasped one certainty in her molecule-fizzing post-regeneration confusion: "When people need help, I never refuse?' She even sustainably sourced her new costume from a charity shop. Yet she was also brilliantly nerdy, Professor Branestawm-like as she cobbled together a sonic screwdriver and fearlessly provocative as she "misheard" the alien's name as the less intergalactically macho "Tim Shaw".

Phoebe Waller-Bridge was once rumoured to be a potential Doctor ...