Shock of the Who 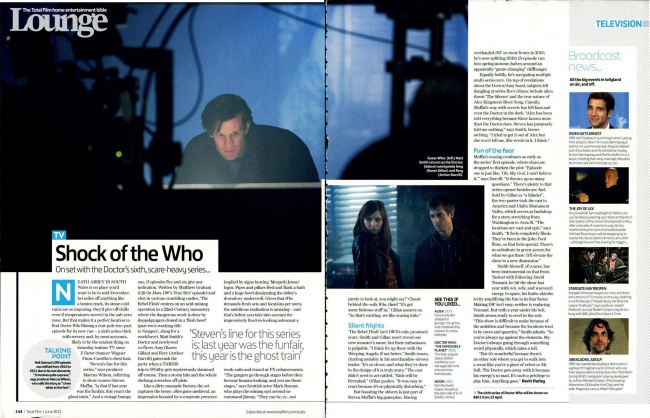 On set with the Doctor's sixth, scare-heavy series...

NEATH ABBEY IN SOUTH Wales is no place you'd want to be in mid-December. Set miles off anything like a beaten track, its stone-cold ruins are so imposing, they'd give off chills even if temperatures weren't in the sub-zero zone. But that makes it a perfect location to find Doctor Who filming a tent-pole two-part episode for its new run - a sixth series thick with secrecy and, by most accounts, likely to be the scariest thing on Saturday teatime TV since X Factor chancer Wagner Fiuza-Carrilho's chest hair. "Steven's line for this series," says producer Marcus Wilson, referring to show-runner Steven Moffat, "is that if last year was the funfair, this year's the "host train." And a vintage bumpy one, if episodes five and six give any indication. Written by Matthew Graham (Lift On Mars, DW's 'Fear Her' episode) and shot in various crumbling castles, 'The Rebel Flesh' centres on an acid-mining operation in a 22nd-Century monastery where the dangerous work is done by doppelgangers cloned in a 'flesh bowl' (part two's working title is 'Gangers', slang for a workforce). Matt Smith's Doctor and newlywed co-flyers Amy (Karen Gillan) and Rory (Arthur Darvill) gatecrash the party when a TARDIS trip to Whitby gets mysteriously slammed off-course. Then a storm hits and the whole shebang screeches off-piste.

Like a dirty monastic factory, the set captures the tenor. Alien gone medieval, an impression boosted by a corporate presence implied by signs bearing 'Morpeth Jetson' logos. Pipes and pillars feed and flank a bath and a huge bowl dominating the abbey's dormitory undercroft. Given that Who demands fresh sets and locations per story, the ambitious realisation is amazing - and that's before you take into account the impressively lived-in-looking astronaut-y work-suits and teased-at FX enhancements. "The gangers go through stages before they become human-looking, and you see those stages," says Scottish actor Mark Bonnar, who plays the mining op's second-in-command Jimmy. "They can be, er... not pretty to look at, you might say!" Classic behind-the-sofa Who, then? "It's got some hideous stuff in," Gillan assures us. "So that's exciting, we like scaring kids."

'The Rebel Flesh' isn't DW6's only promised scare. Smith and Gillan won't reveal one new monster's name, but their enthusiasm is palpable. "I think it's up there with the Weeping Angels, if not better," Smith teases, chatting amiably in his merchandise-strewn trailer. "It's so clever, and what they've done in the design of it is truly scary." The cast didn't need to act rattled. "Kids will be frrreaked," Gillan gushes. "It was easy to react because it's so physically disturbing."

But boosting the shivers is just part of Steven Moffat's big gameplan. Having SEE THIS IF YOU LIKED...

overhauled DW on most fronts in 2010, he's now splitting 2011's 13-episode run into spring/autumn halves around an apparently "game-changing" cliffhanger.

Equally boldly, he's navigating multiple multi-series arcs. On top of revelations about the Doctor/Amy bond, subjects left dangling at series five's climax include alien threat 'The Silence' and the true nature of Alex Kingston's River Song. Cannily, Moffat's way with secrets has left fans and even the Doctor in the dark. 'Alex has been told everything because River knows more than the Doctor does. Steven has purposely told me nothing," says Smith, brows arching. "I tried to get it out of Alex but she won't tell me. She revels in it, I think."

Fun of the fear

Moffat's teasing continues as early as the series' first episode, where clues are dropped to thicken the plot: "Episode one is just like, 'Oh. My. God. I can't believe it,'" says Darvill. "It throws up so many questions." There's plenty to that series opener besides arc-fuel. Sold by Gillan as "a blinder", the two-parter took the cast to America and Utah's Monument Valley, which serves as backdrop for a story stretching from Washington to Area 51. "The locations are vast and epic," says Smith. "It feels completely filmic. They've been in the John Ford films, so that feels special. There's no substitute in green-screen for what we got there. It'll elevate the show to a new dimension."

Smith himself, of course, has been instrumental on that front. Tasked with following David Tennant, he hit the show last year with wit, wile, and wayward energy to spare, his limbs-akimbo levity amplifying the fun in its fear factor. Making DW isn't easy; neither is replacing Tennant. But with a year under his belt, Smith seems ready to revel in the role. "This show is difficult to make because of the ambition and because the locations tend to be caves and quarries," Smith admits. "So you're always up against the elements. My Doctor's always going through something weird physically, which takes a toll.

"But it's wonderful because there's no other role where you get to walk into a room like you're a piece of velvet or Mr Soft. The Doctor gets away with it because his energy's so mad. It's such a privilege to play him. Anything goes." Kevin Harley

The sixth series of Doctor Who will be shown on BBC1 from 23 April.

DOCTOR WHO: 'THE IMPOSSIBLE PLANET' The Ood, a placid space-station workforce, turn red-eyed demons who terrorise their bosses.

MOON 2009 Sam Rockwell meets himself on the dark side of sci-fi. Spoiler clones!