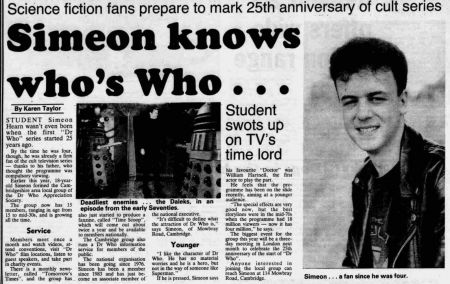 STUDENT Simeon Hearn wasn't even born when the first "Dr Who" series started 25 years ago.

By the time he was four though, he was already a firm fan of the cult television series — thanks to his father, why, thought the programme was compulsory viewing.

There is a monthly newsletter, called "Tomorrow's Times", and the group has also just started to produce a fawn, called "Time Scoop", which will come out about twice a year and be available to members nationally.

The Cambridge group also runs a Dr Who information service for members of the public.

The national organisation has been going since 1976. Simeon has been a member since 1983 and has Just become an associate member of the national executive

"It's difficult to define what We attraction of Dr Who is, says Simeon. of Mowbray Road. Cambridge.

"I like the character of Dr Who. He has no material worries and he is a hero, hut not in the way of someone like Superman."

If he is pressed, Simeon says his favourite "Doctor" was William Hartnell, the first actor to play the part.

He feels that the programme has been on the slide recently, aiming at younger audience.

"The special effects are very good now, but the best storylines were in the mid-70s when the programme had 18 million viewers — now it has four million," he says.

The biggest event for the group this year will be a three-day meeting in London next month to celebrate the 25th anniversary of the start of "Dr Who."

Anyone interested in Joining the local group can reach Simeon at 114 Mowbray Road, Cambridge.

Caption: Deadliest enemies ... the Daleks, in an episode from the early Seventies.

Caption: Simeon ... a fan since he was four.