Singing detective to play Dr. Who 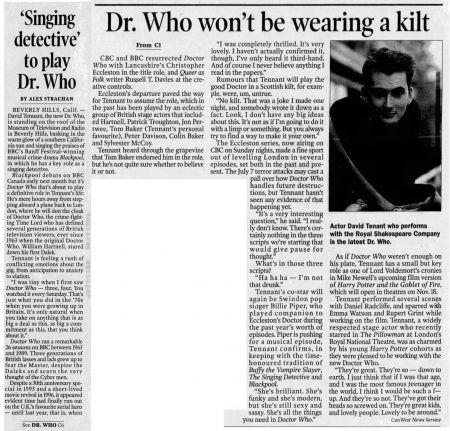 BEVERLY HILLS, Calif. — David Tennant, the new Dr. Who, is standing on the roof of the Museum of Television and Radio in Beverly Hills, basking in the warm glow of a southern California sun and singing the praises of BBC's Banff Festival-winning musical crime drama Blackpool, in which he has a key role as a singing detective.

Blackpool debuts on BBC Canada early next month but it's Doctor Who that's about to play a definitive role in Tennant's life: He's mere hours away from stepping aboard a plane back to London, where he will don the cloak of Doctor Who, the crime-fighting Time Lord who has defined several generations of British television viewers, ever since 1963 when the original Doctor Who, William Hartnell, stared down his first Dalek.

Tennant is feeling a rush of conflicting emotions about the gig, from anticipation to anxiety to elation.

"I was tiny when I first saw Doctor Who — three, four. You watched it every Saturday. That's just what you did in the '70s when you were growing up in Britain. It's only natural when you take on anything that is as big a deal as this, as big a commitment as this, that you think about it."

Doctor Who ran a remarkable 26 seasons on BBC between 1963 and 1989. Three generations of British lasses and lads grew up to fear the Master, despise the Daleks and scorn the very thought of the Cybermen.

Despite a 30th anniversary special in 1993 and a short-lived movie revival in 1996, it appeared evident time had finally run out on the U.K.'s favourite serial hero — until last year, that is, when CBC and BBC resurrected Doctor Who with Lancashire's Christopher Eccleston in the title role, and Queer as Folk writer Russell T. Davies at the creative controls.

Eccleston's departure paved the way for Tennant to assume the role, which in the past has been played by an eclectic group of British stage actors that included Harwell, Patrick Troughton, Jon Pertwee, Tom Baker (Tennant's personal favourite), Peter Davison, Colin Baker and Sylvester McCoy.

Tennant heard through the grapevine that Tom Baker endorsed him in the role, but he's not quite sure whether to believe it or not.

"I was completely thrilled. It's very lovely. I haven't actually confirmed it, though, I've only heard it third-hand. And of course I never believe anything I read in the papers."

Rumours that Tennant will play the good Doctor in a Scottish kilt, for example, were, um, untrue.

"No kilt. That was a joke I made one

night, and somebody wrote it down as a fact. Look, I don't have any big ideas about this. It's not as if I'm going to do it with a limp or something. But you always try to find a way to make it your own."

The Eccleston series, now airing on CBC on Sunday nights, made a fine sport out of levelling London in several episodes, set both in the past and present. The July 7 terror attacks may cast a

pall over how Doctor Who handles future destructions, but Tennant hasn't seen any evidence of that happening yet.

"It's a very interesting question," he said. I really don't know. There's certainly nothing in the three scripts were starting that would give pause for thought."

What's in those three scripts?

Tennant's co-star will again be Swindon pop singer Billie Piper, who played companion to Eccleston's Doctor during the past year's worth of episodes. Piper is pushing for a musical episode, Tennant confirms, in keeping with the time-honoured tradition of Buffy the Vampire Slayer, The Singing Detective and Blackpool.

you need in Doctor Who."

Actor David Tenant who performs with the Royal Shakespeare Company is the latest Dr. Who.

As if Doctor Who weren't enough on his plate, Tennant has a small but key role as one of Lord Voldemort's cronies in Mike Newell's upcoming film version of Harry Potter and the Goblet of Fire, which will open in theatres on Nov. 18.

Tennant performed several scenes with Daniel Radcliffe, and sparred with Emma Watson and Rupert Grint while working on the film. Tennant, a widely respected stage actor who recently starred in The Pillowman at London's Royal National Theatre, was as charmed by his young Harry Potter cohorts as they were pleased to be working with the new Doctor Who.

"They're great. They're so — down to earth. I just think that if I was that age, and I was the most famous teenager in the world, I think I would be such a f—up. And they're so not. They've got their heads so screwed on. They're great kids, and lovely people. Lovely to be around."