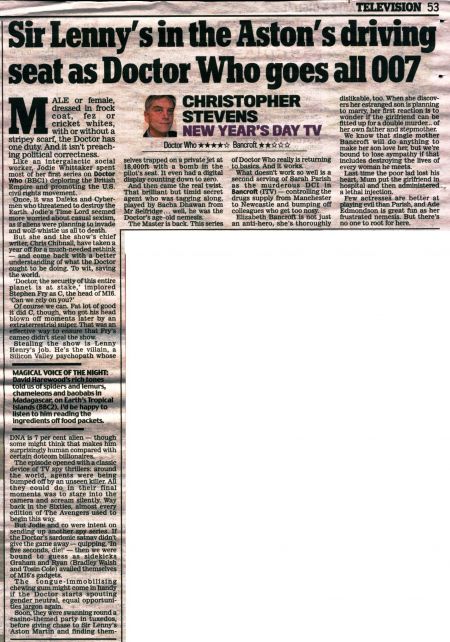 MALE or female, dressed in frock coat, fez or cricket whites, with or without a stripey scarf, the Doctor has one duty. And it isn't preaching political correctness.

Like an intergalactic social worker, Jodie Whittaker spent most of her first series on Doctor Who (BBC1) deploring the British Empire and promoting the U.S. civil rights movement.

Once, it was Daleks and Cyber-men who threatened to destroy the Earth. Jodie's Time Lord seemed more worried about casual sexism, as if aliens were planning to invade and wolf-whistle us all to death. But she and the show's chief writer, Chris Chibnall, have taken a year off for a much-needed rethink - and come back with a better understanding of what the Doctor ought to be doing. To wit, saving the world.

'Doctor, the security of this entire planet is at stake,' implored Stephen Fry as C, the head of MI6. 'Can we rely on you?'

Of course we can. Fat lot of good it did C, though, who got his head blown off moments later by an extraterrestrial sniper. That was an effective way to ensure that Fry's cameo didn't steal the show.

Stealing the show is Lenny Henry's job. He's the villain, a Silicon Valley psychopath whose DNA is 7 per cent alien - though some might think that makes him surprisingly human compared with certain dotcom billionaires.

The episode opened with a classic device of TV spy thrillers: around the world, agents were being bumped off by an unseen killer. All they could do in their final moments was to stare into the camera and scream silently. Way back in the Sixties, almost every edition of The Avengers used to begin this way.

But Jodie and co were intent on sending up another spy series. If the Doctor's sardonic satnav didn't give the game away - quipping, 'In five seconds, die!' - then we were bound to guess as sidekicks Graham and Ryan (Bradley Walsh and Tosin Cole) availed themselves of MI6's gadgets.

Soon, they were swanning round a casino-themed party in tuxedos, before giving chase to Sir Lenny's Aston Martin and finding themselves trapped on a private jet at 18,000ft with a bomb in the pilot's seat. It even had a digital display counting down to zero. And then came the real twist. That brilliant but timid secret agent who was tagging along, played by Sacha Dhawan from Mr Selfridge ... well, he was the Doctor's age-old nemesis.

The Master is back. This series of Doctor Who really is returning to basics. And it works.